Alexandra Morton sits at her kitchen table and tries to ignore the e-mails pouring in to the laptop open in front of her. She is looking out the picture window at Rough Bay, which is tranquil this morning, reflecting a vivid blue sky and the snow-capped mountains of northern Vancouver Island.

"That's where I want to be," she says wistfully, as if the sea, which washes ashore 10 metres from her tiny cabin on Malcolm Island, is somehow unreachable because of the life she has chosen.

Her idea of a perfect day is to rise at dawn and head out in her boat, Blackfish Sound, wandering until she finds a tide line where a rich seam in the ocean currents is marked by a ribbon of flotsam. Then she turns off the engine and drifts with a hydrophone hung over the side of the boat.

But the days when she can escape to that idyllic world are few, says Ms. Morton, who is tied to her computer, afraid that if she rests, she may fail at her self-appointed task of removing open-net salmon pens from coastal waters.

In waging her fierce campaign against both a powerful industry and its government allies, the 55-year-old biologist has emerged as a leading champion of the anti-fish farm movement. But she has also become a polarizing figure in the ongoing debate over the future of aquaculture.

Ms. Morton's campaign to rid the coast of fish farms began in the late 1980s, when salmon operations began to expand from the Sunshine Coast, near Vancouver, moving north into pristine waters. Recently widowed, she was living in a float house at Echo Bay with her young son, Jarret, when the first farms showed up in the Broughton Archipelago. The small community of about 100 turned to her for help.

"I was the only one with a word processor," she says. And she used it, writing thousands of pages of letters to government officials over the following years.

She also started doing scientific research into the impact of fish farms on wild salmon. Her papers, published in leading journals, including Science, have challenged the orthodoxy of fisheries research.

In 2001, she warned that sea lice were spreading to wild pink salmon, and predicted the stock collapse that occurred the next year. When the runs later bounced back, fish farmers fumed. Eight years later, she went to the B.C. Supreme Court and forced the federal government to take over management of the industry from the province. Last year at the Cohen commission, a federal inquiry into the decline of Fraser River sockeye, she made the province release detailed disease records on fish farms.

After the government denied that infectious salmon anemia, a disease associated with farmed salmon, was present on the West Coast, she commissioned her own tests and found signs it was.

Last week, she was back in the news with claims that farmed salmon bought in Vancouver supermarkets had tested positive for a virus associated with heart and skeletal muscle inflammation, a disease that has been afflicting fish farms in Norway. However, industry and government officials have said there is no proof of the disease in B.C. waters – once again putting her at the centre of controversy.

"Alexandra Morton is to salmon like Dian Fossey was to gorillas and Jane Goodall is to chimpanzees," says Don Staniford, an activist with the Global Alliance Against Industrial Aquaculture. "She is spearheading a salmon revolution not just in B.C. but around the globe."

But critics challenge her research as biased. "She selectively highlights information that, taken out of context, appears to support her predetermined point of view," says Mary Ellen Walling, executive director of the B.C. Salmon Farmers Association.

Long before Ms. Morton became a polarizing figure on the West Coast, the Washington, D.C., native was studying captive whales at Marineland of the Pacific in Los Angeles when she began to suspect they had "gone mad" living in tanks. She was convinced that orcas have a complex and highly developed language, but she felt she had to study whales in their natural habitat to crack the code.

Arriving in B.C. in 1979, she found not only the original home pod of the two captive orcas, but also a wild place that called to her on a deeper level. "I loved everything about it, the cold, the wet. … I just felt – this is my habitat," she says.

THE ACCIDENT THAT CHANGED HER LIFE

Camping on beaches with an itinerant group of killer-whale researchers, she met Robin Morton, a Canadian filmmaker. "Robin came out of the water and stripped naked. He had this [killer whale]tattoo on his shoulder," she says. "I was married, pregnant and living on a boat with him within a year."

Ms. Morton, who can talk non-stop for hours about her research, pauses and looks out at the sea before describing the 1986 accident that shattered her life.

"Robin was exploring the underwater world of the orca," she says. "He was always pushing for the best shots and he thought it would be better not to make bubbles. It's a threat gesture and it's noisy. So he got this rebreather … and it malfunctioned underwater. He fainted."

She stops talking. Her cup of tea grows cold on the table.

"He had drilled into me: 'Do not wreck the shot,'" Ms. Morton says, explaining why she kept waiting in a boat above the dive site for him to come up. "I was there with our little boy. … For the longest time I just agonized about what to do."

She tied a rope to herself, left four-year-old Jarret alone, and dove down. It was too late. She found Robin lying at the bottom, watching as his camera rolled into deeper water.

Ms. Morton still can't understand why the killer whale didn't somehow signal to her that her husband was in trouble. "He died right next to one. And she didn't tell me," she says, struggling to maintain her composure. "I know that's totally irrational, but that's how I feel."

Her eyes flick to the computer screen and the unread list of messages brings her back to the moment. "I get up at 5:30 in the morning and work until midnight. But I'm never done. Never," she says.

Jarret, now 30, is a rocket scientist, and she is raising a teenage daughter, Clio (from a second, now ended relationship). She is almost always broke, and admits to frequent bouts of financial despair. "The public is keeping me alive. They are paying my bills, buying my groceries," says Ms. Morton, who is sustained by donations that come through the mail, or by cash that is pressed into her hands by strangers at the public events she attends.

"I don't want to be anybody's leader," she says. "But there has to be some kind of a leader and I have so much in my head."

Her advocacy has fuelled public pressure to have salmon farms moved onto land. Last year, she walked 500 kilometres on Vancouver Island to raise public awareness, culminating in a rally that drew 4,000 people to the legislature lawn in Victoria.

Despite her successes, Ms. Morton says she is afraid she is failing. "I haven't shut down one fish farm."

So why does she keep fighting?

Mark Hume is a member of The Globe and Mail's Vancouver bureau. 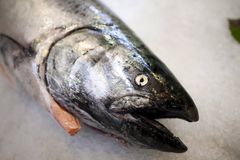