There are growing fears violence could erupt if a protest camp in northern B.C. remains in place on the right-of-way of two proposed gas lines.

But resolving the dispute will require untangling a complicated internal conflict that has set hereditary and elected chiefs of the Wet'suwet'en First Nation against one another.

She's also concerned about what might happen if the RCMP move in to dismantle the camp, which has been in place for several years but has recently begun to hold up industry work crews.

"I just hope it doesn't have to escalate into violence and that our people are safe because we have a lot of Wet'suwet'en people working on the ground with contractors for Coastal GasLink," said Chief Ogen. "I just want to make sure all of our Wet'suwet'en people are safe out there and I'm sure that's what the position of the police would be too."

Tensions in the long simmering dispute were highlighted when the RCMP sat down for a four-hour meeting in Smithers recently with the protest group, a Wet'suwet'en clan or family group known as the Unist'ot'en, after some native leaders claimed the police were about to raid the camp.

The RCMP have denied there were any plans for a raid and have stressed police remain neutral in the conflict.

Underlying the dispute between the gas industry and the protesters is a complex political struggle within the Wet'suwet'en First Nation.

Ms. Huson claims the backing of several hereditary chiefs. But Chief Ogen says she has the support of both hereditary and elected chiefs.

In an interview, Chief Ogen said she hopes the matter can be resolved in a meeting she's trying to set up involving the First Nations Leadership Council, a highly influential body that represents the political executives of the B.C. Assembly of First Nations, the First Nations Summit and the Union of B.C. Indian Chiefs.

"Whether we compromise or find a way to get both of our needs met, we [the Wet'suwet'en and Unist'ot'en] are one people and we should be able to sit down and have a discussion," said Chief Ogen. "My position is we want to sit down … and have the Leadership Council neutral in all of this and help us find a resolve.

The Wet'suwet'en, a First Nation that claims about 55,000 square kilometres of land in the Burns Lake area, lie directly on the routes of the 480-kilometre Pacific Trails Pipeline, proposed by Chevron Canada and Woodside Energy International Ltd., and TransCanada's 670-km Coastal GasLink pipeline. The pipelines would link rich northeast gas fields with a planned LNG facility in Kitimat.

Recently Unist'ot'en protestors blocked Coastal GasLink crews from accessing the area, and the company filed a complaint with the RCMP.

In an interview from the protest camp, Ms. Huson said the Unist'ot'en intend to maintain the protest camp – and she's not interested in attending the meeting Chief Ogen is trying to set up.

She said the Unistot'ot'en function under the traditional hereditary chief system, while Chief Ogen gets her authority though an electoral process established by the federal government.

"Our government structure is around the [traditional] feast hall, it's not around a [elected band council] boardroom table," she said. "So if Chief Ogen or anybody else wants to discuss business on our territory they need to come to our feast hall."

Gillian Robinson-Riddell, a spokesperson for Chevron Canada Ltd., said the company is hoping a peaceful settlement can be reached.

"Throughout the years we have always maintained that it's our hope to see this blockade resolved through dialogue and discussion. So we're continuing to work to see that happen," she said.

Mark Cooper, a spokesman for TransCanada, said in an e-mail his company wants to continue work in the area.

"We have been conducting important environmental fieldwork along the proposed pipeline route for months," he stated. "Our goal is to carry out this seasonal work in the safest possible manner for our staff, contractors and First Nations participants." 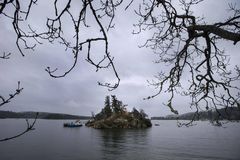 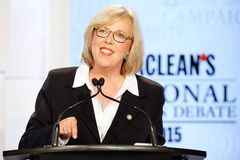 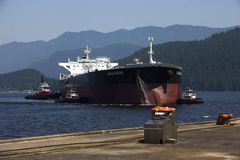