The Canadian Federation of Independent Business has broken with other leading business groups to call for a No in the Lower Mainland's plebiscite, saying a proposed sales tax to finance transit is too expensive for its members and would set an unfortunate precedent.

Richard Truscott, the federation's B.C. and Alberta vice-president, said his organization will campaign against the tax proposal embraced by business groups such as the Vancouver Board of Trade and the B.C. Chamber of Commerce.

"Small business owners in the Metro Vancouver area are definitely feeling taxed to the eyeballs, and there's little to no appetite to add to the high tax burden they already face," Mr. Truscott said.

But Iain Black, president and CEO of the Vancouver Board of Trade, and a prominent figure in the Yes campaign, said the federation was "narrow" and "one-dimensional" in its perspective.

"The narrative of CFIB is very consistent: It's 'No tax is a good tax and government is wasteful.' It's not a new phenomenon," said Mr. Black, a former provincial small-business minister.

Lower Mainland residents will vote through mail-in ballots between March 16 and May 29 on whether to support a new half-per-cent sales tax intended to cover some costs for a 10-year program of new transit infrastructure. The plan includes a new Vancouver subway and light rail in Surrey.

The federation's stand hinges on an online survey of Metro Vancouver CFIB members that found 80 per cent opposed to the tax. The survey taken between Feb. 9 and 12 had only 260 respondents, representing about 8 per cent of Vancouver members, but Mr. Truscott said the organization has taken the result as reflective of overall membership views.

But Mr. Truscott said there is also a larger issue – that a specific tax to finance public infrastructure has to be stopped in B.C. before it's tried elsewhere.

"This is precedent-setting stuff. This is not just going to be an issue for the Metro Vancouver area. This is something that other municipalities could latch on to, which would have an enormous impact on small businesses right across our country," he said.

"I definitely think this is the thin edge of the wedge," Mr. Truscott said.

Mr. Truscott acknowledged the CFIB was at odds with other business groups, but said it was important to represent his members' views.

"Clearly there's a lot of cynicism and doubt that adding a half point to the [provincial sales tax] is the best way to fund transportation infrastructure. The onus is on the Yes side to make the case and, to date, obviously they haven't done so."

He was skeptical about other governments picking up on the B.C. example because referendums are not generally used to shape tax policy.

The debate came as the new interim CEO of TransLink, the regional transportation authority, was settling into his job. Doug Allen, recently CEO of the private entity that runs Canada Line, replaced Ian Jarvis this week, as part of a push to bring new leadership to an organization that has become a lightning rod for the debate.

Mr. Truscott called it a "symbolic change," but said more needs to be done to show an accountable and effective organization.

In an interview on Thursday, Mr. Allen declined comment on the CFIB declarations, and suggested he was looking beyond the rhetorical cut and thrust of the plebiscite to focus on making sure that TransLink is properly run.

Asked about creating a leaner organization, he said he was, at this point, looking at issues such as procurement policies and the management of elevators and escalators.

"I have to run and lead an organization and that's what I am doing," said Mr. Allen, who is helping TransLink find his permanent replacement. 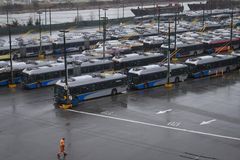 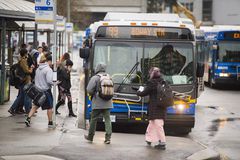 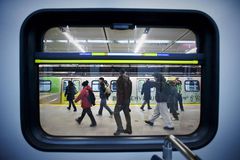 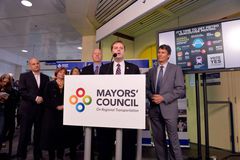