The rules for heritage sites in B.C., including ancient First Nations burial grounds, are very different than those for regular cemeteries, and conflicts can start when those sites are on private land 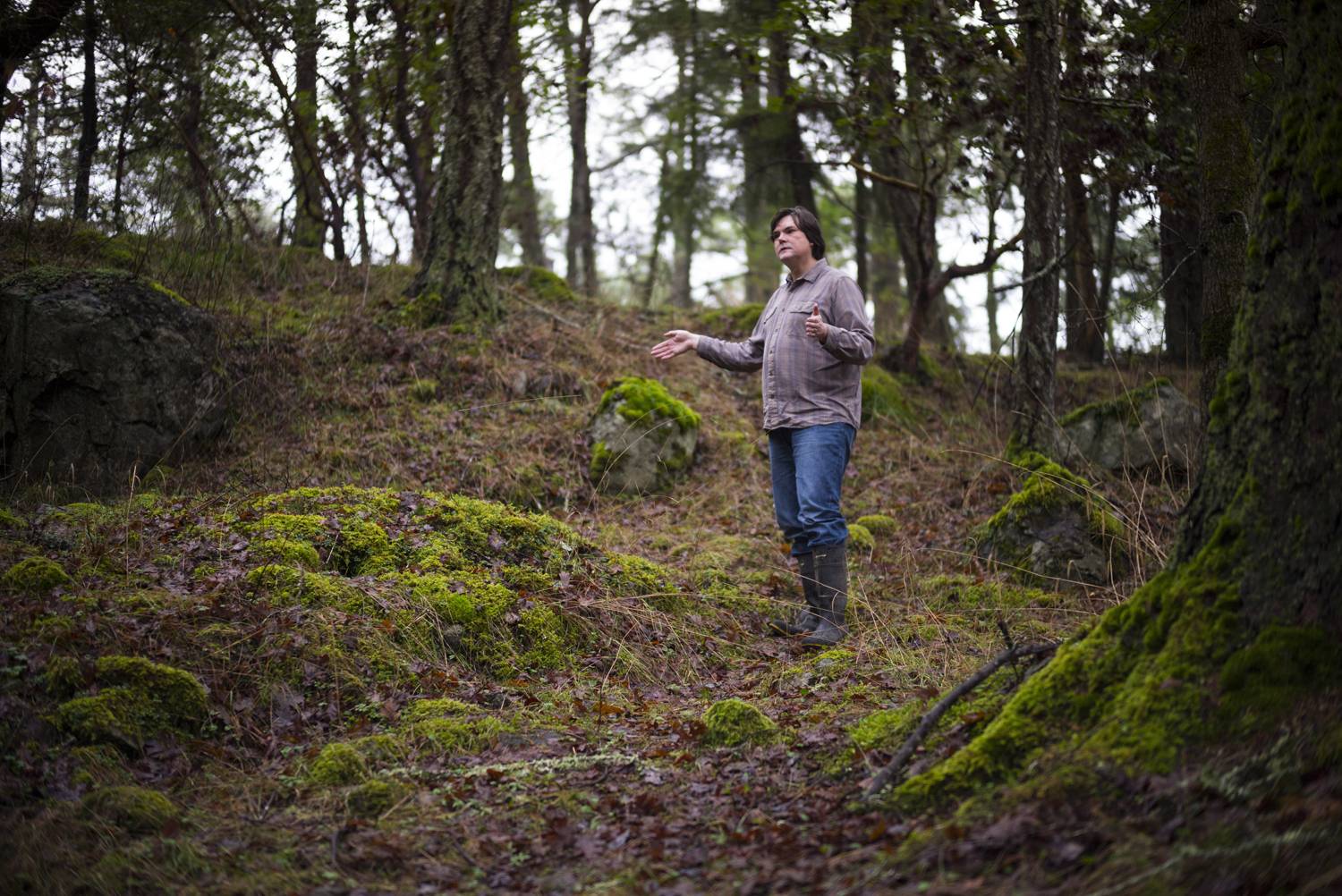 Darcy Mathews, an archeologist from the University of Victoria, surveys the remains of Coast Salish burial cairns near Metchosin, B.C.. (John Lehmann/The Globe and Mail)

Trudging along a muddy path through a lush forest of moss-draped Douglas fir and Garry oak near Victoria, archeologist Darcy Mathews sees the dead everywhere.

“We are firmly in a cemetery,” he said. Nearby, he points out the faint footprints of ancient fortifications, shell middens, places where camas lilies were farmed as indications of a much earlier occupation. Amid those signs of life, he is looking for patterns in the rocks that reveal graves – the most tangible remnant of a Coast Salish village.

After an hour of walking with Mr. Mathews, you start to see it too. The area, now preserved as parkland, is dotted with rock cairns marking the graves of First Nations peoples, a funeral practice used between 500 and 1,500 years ago. Mr. Matthews has registered hundreds of these sites in just a small strip of coast around the southern tip of Vancouver Island.

The recent conflict over development on Grace Islet in the Gulf Islands, where ancient human remains and 15 rock cairns have been found, has sparked a debate about how British Columbia protects monuments to the dead when they are found outside of a registered cemetery.

The owner of Grace Islet is building his retirement home after years of wrangling with the provincial archeology branch to obtain a permit. But as a result of opposition from local First Nations, the B.C. government is now in talks to try to buy back the land. 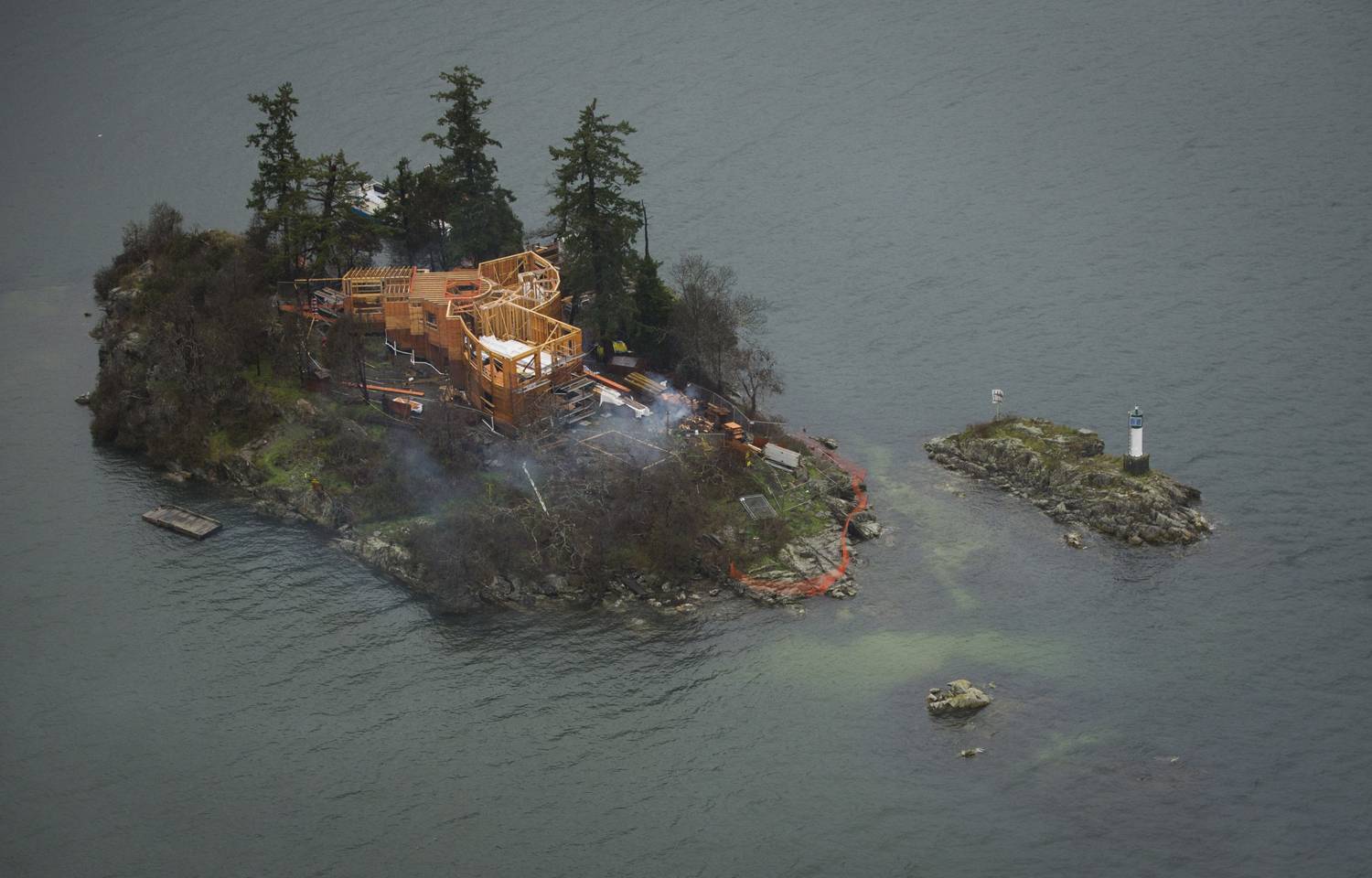 Robert Morales, the chief negotiator for the Hul'qumi'num Treaty Group, says the home that is being built on Grace Islet is a desecration of a graveyard and should never have been allowed to proceed. (John Lehmann/The Globe and Mail)

What is happening is a clash of cultural values, and it is not contained to a single, privately owned construction site. There are more than 2,000 sites registered to date in British Columbia that are believed to contain aboriginal remains from a time before the lines on a map defined the province.

The Coast Salish rock cairns, although only used for about 1,000 years, can be found all along the southern coast of B.C., throughout the Gulf Islands, and along the banks of the Fraser River.

Where cairns are found in B.C. 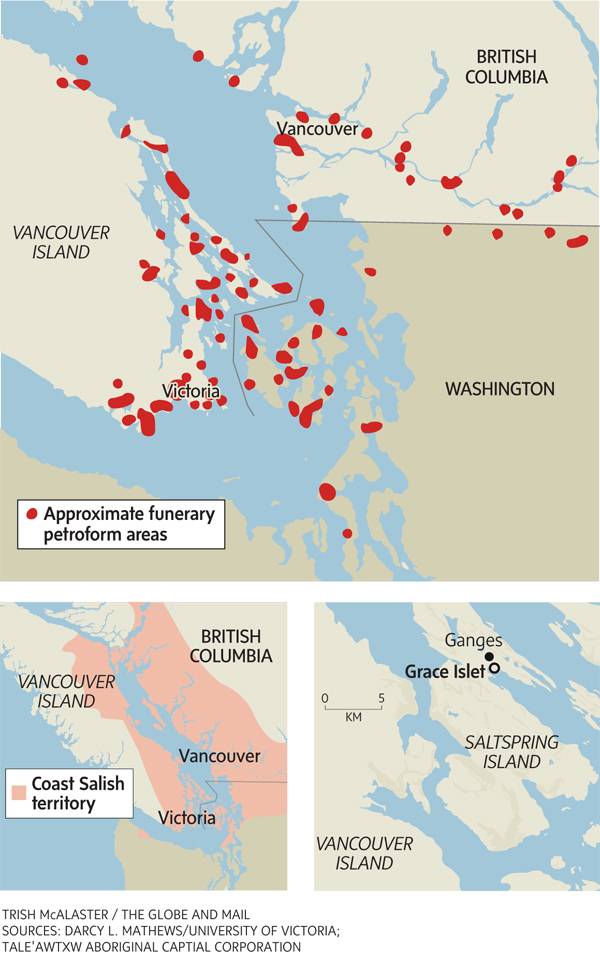 The current number of registered archeology sites in B.C.

The number of those sites that are believed to be First Nations burial sites.

The number of “site alteration” and heritage inspection permits processed each year by the provincial archaeology branch. Nine times out of 10, the property owner would have to hire an archeologist to work through the permit process.

The number of those permits that are issued each year.

The number of times, since 1976, that the province has bought property to resolve a conflict over heritage or archeology values.

The total cost of those 11 properties

Many grave sites have long since disappeared under modern human settlements. Those that remain are protected under B.C.’s Heritage Conservation Act, but critics believe the construction on Grace Islet is proof that the law isn’t working – for landowners who face uncertainty and delay, or for First Nations who believe they still have an obligation to protect the graves of these long-ago-deceased inhabitants.

Mr. Mathews stops to inspect a large rectangular cairn – this one is at least three metres in length, with the largest rocks forming an outer wall. Now sunken and covered in moss, the cairn is disappearing into the landscape.

As a leading expert in Coast Salish funeral practices, Mr. Mathews has spent two decades trying to piece together what would have happened here an estimated 1,500 years ago. It is a task complicated by his decision to adhere to Coast Salish protocol in his work, which does not allow him to move the rocks; the dead cannot be disturbed without consequences for the living.

“Of course we are curious about what is inside,” Mr. Mathews allows. Sometimes, circumstances offer a research opportunity. Graves have been exposed by accident, or through an act of nature, such a tree ripping out of the ground, exposing the contents. From studying those incidents, he is certain that there is only one individual buried here, likely in one corner, the body curled up in a fetal position. The size of the cairn, and the proximity to what would have been a valuable camas garden, suggest this is the grave of someone of high rank. It would have taken a substantive community effort to create this cairn, which would have been built high with rocks and soil, with offerings of clothing and food.

Post-1846 in British Columbia, it is a cemetery. Pre-1846, it is an artifact, an archeological site
George Nicholas, SFU archeology professor

Under provincial law, this rock feature is protected. It is illegal to damage, desecrate or alter a burial place that has historical or archeological value. But this particular cairn and the many ones nearby are preserved by the good fortune of being in a public park. Conflict can arise when private property interests and those values collide.

“This is a huge problem,” says George Nicholas, a professor of archeology and director of Simon Fraser University’s Intellectual Property Issues in Cultural Heritage project.

Ancient burial sites, established prior to European settlement, are not recognized in the same way as a registered cemetery. “You have cultural or race-based differences in the protection offered to human remains and burial grounds,” he said. Those differences are defined by an arbitrary line, set almost 170 years ago when the British asserted sovereignty. “Post-1846 in British Columbia, it is a cemetery. Pre-1846, it is an artifact, an archeological site.” 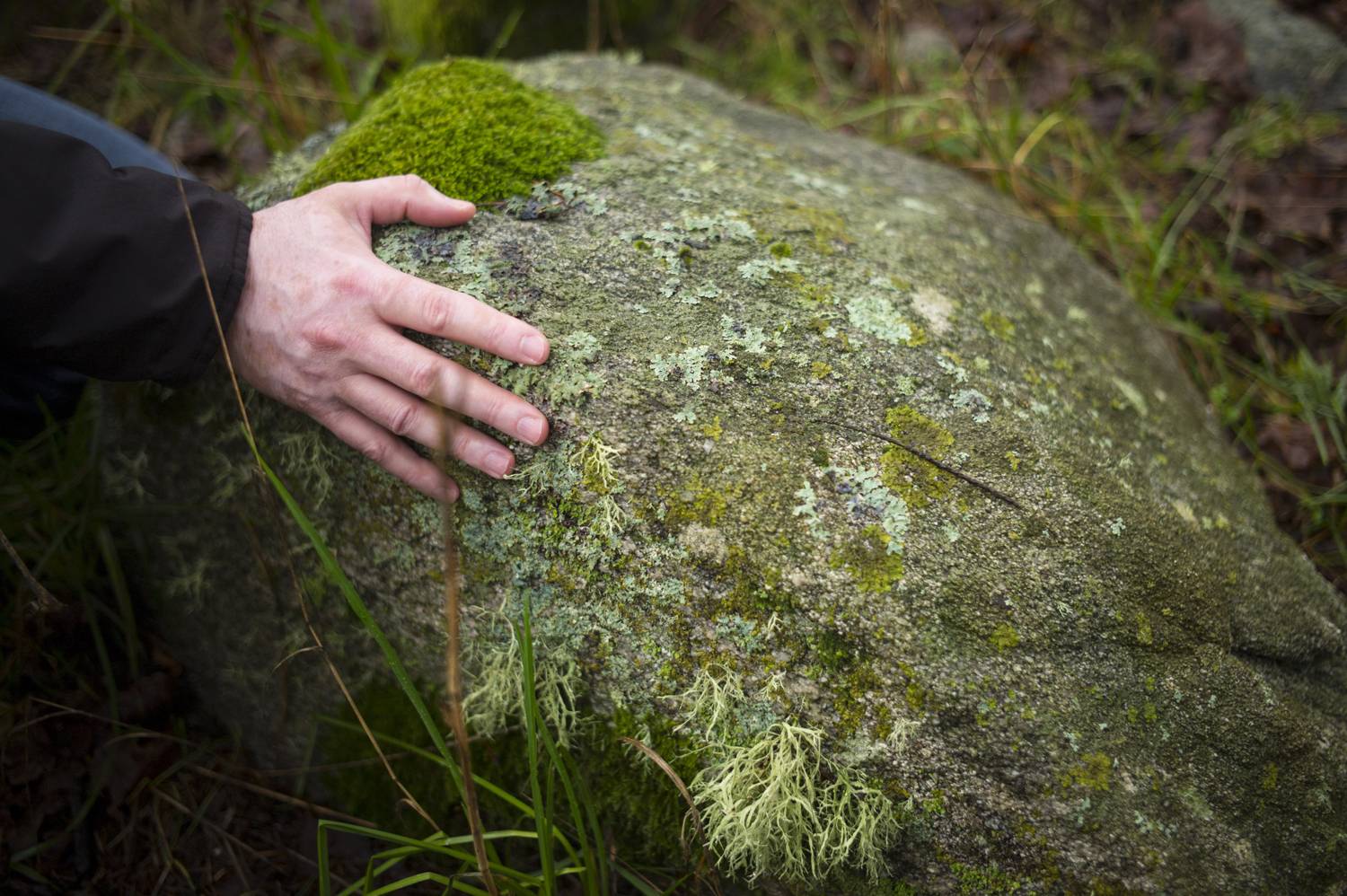 Registered cemeteries are rigidly protected by the law – visitation hours and the use of motorized vehicles, for example, are regulated. But under the rules that govern heritage sites, which apply to those earlier burial grounds, the benefits of archeological preservation are weighed against the benefits of development.

Aboriginal rights and title have gained certainty in recent Canadian case law, and Prof. Nicholas predicts that First Nations will increasingly seek to influence how these sites are managed. That can be resolved through negotiation when Crown land is involved. But when artifacts or human remains are discovered on private property – as in the case at Grace Islet – the burden falls on individuals. 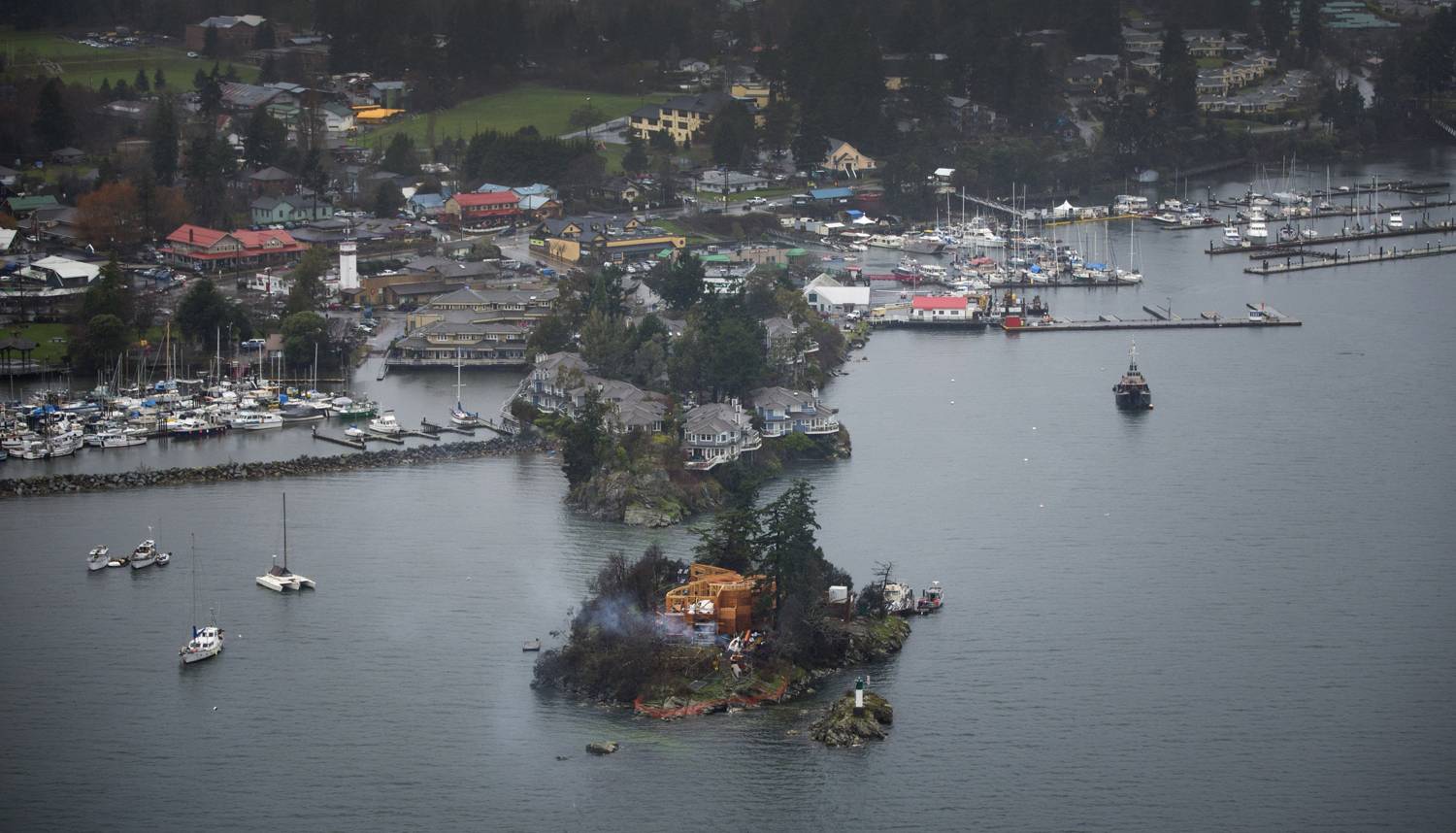 Grace Islet is a small island in Saltspring Island’s Ganges Harbour, where the landowner is constructing a home on a B.C. First Nation’s burial ground. (John Lehmann/The Globe and Mail)

“The intent of the Heritage Conservation Act is good,” Prof. Nicholas said. “The flaw is that the landowner is responsible for any archeological or heritage sites that are found. It unfairly puts the onus, the financial responsibility, on the owner. Often the frustration and anger of the landowner is misdirected to First Nations peoples whose heritage is represented, rather than at the province, which should be responsible.”

There is no system of disclosure for archeological sites, so a private landowner may not know they have an issue until they start to develop their property. Protected archeological sites may not be altered without a permit, and in order to obtain such a permit, the owner will most likely be required to hire an archeologist to survey the site. The government can then consult with First Nations and impose restrictions on development as it sees fit.

B.C.’s minister of Forests, Lands and Natural Resource Operations, Steve Thomson, says the system is working well. “We believe the current process works, it does provide the balance,” he said. “We have over 44,000 archeological sites on the books in B.C.… The principle in those places is that development has to proceed with appropriate protection of the archeological values.”

Robert Morales is the chief negotiator for the Hul'qumi'num Treaty Group, which represents six of the First Nations in the region around Grace Islet.

He was consulted and consented to the pre-construction archeological survey on Grace Islet, a small, rocky island in Ganges Harbour off Saltspring Island. But he says the home that is being built is a desecration of a graveyard and should never have been allowed to proceed. “It is inappropriate to do this, to disrespect our ancestors in this way, to build a house on top of them.”

He argues it is time the province revisited its policies. He says the archeological values that Mr. Thomson refers to are treated in law as objects, without understanding the cultural values, the connection between First Nations and their ancestors. “That is where it falls apart,” Mr. Morales said. “Irrespective of your own spiritual beliefs, it is a matter of respect.”