The Globe and Mail is looking at people who have been touched by the refugee crisis British Columbia, from sponsors and teachers to the refugees themselves. Today, Tima Kurdi, who has been transformed from the grieving aunt of Alan Kurdi into a well-known advocate, explains what's next for her.

More than a year after the body of 3-year-old Alan Kurdi was photographed lying on a Turkish beach, his aunt says she's ready to sell her hair salon in Coquitlam to advocate for refugees full-time.

Alan's very public death instantly turned Tima Kurdi into a national advocate, pushing the federal government to help Syrians by bringing them in as refugees on a large scale, which Canada has done in the past year by settling tens of thousands across the country. She has regularly appeared in the media to comment on refugee issues, including when equally tragic photos of other young Syrians have surfaced, and has drawn on her family's experience by speaking to universities and conferences, as well as higher-profile venues such as the European Parliament.

Now, she says she's ready to turn her full attention to that work.

Read more: Welcome to the country: Refugees are helping a prairie town grow

"Instead of sitting at home and feeling sorry for my family and cry, I decided to become the voice," said Ms. Kurdi, who plans to focus her energy speaking to Canadian schools and universities.

"They [students] are the future, they are the young generation who can take action and make a change and we need them. … I am doing it for free, I am not asking for anything because this is what my heart wants. Planting the seed of hope in people's mind."

Ms. Kurdi says she has e-mailed schools across the country about the idea and already has a couple events scheduled.

She is also in the process of starting a foundation in her nephew's name, which she hopes to have up and running in the next six months. Her husband's income will still allow her family to get by after selling the salon, she says.

Ms. Kurdi said talking about the crisis is also part of her grieving, which stems from the pain that has built up throughout the years.

"For four years, people were crying out to the world. People were losing their lives – from my old neighbours, friends, the people I grew up with," she said.

Alan Kurdi's family had paid human smugglers to take them to Greece in September of last year, but their boat capsized, killing Alan, his 5-year-old brother, Ghalib, and their mother, Rehanna. The children's father, Abdullah Kurdi – Ms. Kurdi's brother – survived and is now living in Iraqi Kurdistan.

Initially, there were conflicting reports about whether the family had applied to become refugees in Canada, but it was in fact Ms. Kurdi's other brother, Mohammad, who was eventually accepted and arrived in Canada with his family last December.

The tragedy has given Ms. Kurdi a profile that has prompted other refugees to reach out for guidance. She said she receives messages every month, but while she tries to comfort them, she explains she can do little to help their individual cases – which she says is frustrating.

"I always tell them please, be patient. And they say they pray every day. They understand and have hope."

Ms. Kurdi praised the Canadian government for bringing in refugees – more than 35,000 have arrived in the past year – but she said it's not enough. She said the country is partly responsible for the war in Syria and needs to do better.

"People are losing their lives, it is getting worse, it is not getting better, we need to help those people," she said.

She also noted a large number of refugees in Canada are privately sponsored and the credit should go to the Canadian people who took them in.

"Canada is a mosaic – we have people for generations that are here. We all come from somewhere looking for better life, for better work. We all have a background and I think that's why people started to put their hearts out."

But the process of adapting is not easy for many refugees, she says, particularly for adults. She said that one year is very little time for parents to rebuild their lives in a new country, with a different culture and language. "They can't find jobs and lots of them have been through traumas … they need to heal."

She also said the Canadian government should waive or give breaks for refugees who need to repay medical and transport loans because of the difficulty in finding jobs and the high costs associated with living in some Canadian provinces.

"Imagine for a second what would you do if one day you had to flee your home and leave everything behind. You become nobody, nobody wants you. What would you do?" 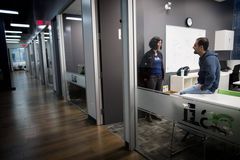 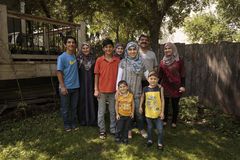