A long-awaited provincial audit of TransLink hasn't solved the agency's short-term funding squeeze and Transportation Minister Mary Polak acknowledged that much more needs to be done to meet the future transit expansion needs of Metro Vancouver.

The audit, which the province ordered six months ago in the midst of a standoff with local mayors about ways to pay for improvements to the Lower Mainland's $1.36-billion-a-year system, found that another $41-million a year could be squeezed out of the operations.

That's on top of the $98-million in savings TransLink already found on its own in the past two years, as it has struggled with demands for more service and rejections from the province, mayors and the B.C. transportation commissioner for new sources of revenue.

Mayors have been lobbying for years to get the province to come up with new revenue sources for transit besides property taxes, gas taxes and fare hikes. The province, however, has argued that TransLink needs to be more efficient with its money before new revenue sources can be considered.

The audit was meant to find those efficiencies.

"This doesn't solve the region's infrastructure needs. None of this gets us the Broadway line," said Nancy Olewiler, a Simon Fraser University public-administration professor who is the chair of the appointed board.

Ms. Polak said much the same, as she announced the audit's findings.

The savings identified are "not enough to meet future transit needs," Ms. Polak said in a news conference.

She said she wants mayors to lead a public dialogue to come up with a long-term vision and funding plan by August, 2013.

The audit also doesn't help TransLink and its mayors' council figure out how to deal with short-term financing problems. TransLink has been counting on a temporary property-tax increase for 2013 and 2014 to cover modest planned improvements.

Last month, mayors had talked about voting on a motion that would essentially rescind that tax this Thursday, when the mayors' council holds its next official meeting. But indications are that the vote could be put off to as late as next May to give them time to figure out whether any of the audit suggestions might be useful in eliminating the need for the property-tax increase.

At first glance, many of the auditors' recommendations, if acted on, would mean making serious cuts to the system or changes to the agency's cautious approach to budgeting, said Ms. Olewiler and mayors' council chair Richard Walton.

The auditors' report said that TransLink consistently underestimates revenues and overestimates costs, so that it ends up with an average surplus of $32-million every year, which then goes into an already-healthy reserve fund.

Mr. Walton, an accountant, said that the board's major recommendation for finding new money in the system – being less conservative about budgeting so that TransLink doesn't end up with a $30-million surplus every year – is contrary to what most financial experts recommend.

"Canadian institutions tend to be quite conservative in their accounting," he said. "We've got a fair amount of praise from around the world because of that conservatism."

Mr. Walton also said the auditors' suggestions to keep cutting SkyTrain runs in off-peak hours or bus routes that are carrying fewer passengers come with penalties for the public.

"Some of those routes that are not as heavily subscribed are used by services workers travelling late at night," he said.

The auditors' report said that 43 per cent of buses operate at less than half capacity, and it suggested that low-volume routes should be replaced with the smaller community shuttles, reduced in frequency or cancelled altogether.

The audit also made a point of saying that Lower Mainland taxpayers pay less transit tax than do people in many other Canadian cities.

Ms. Polak said the province would be willing to look at new revenue streams for funding transit in the Lower Mainland, if the mayors can show they have public buy-in and that they meet provincial criteria.

The criteria for those new funding tools: 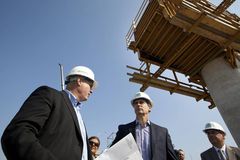