The trek from Kitsilano to the Downtown Eastside is certainly a long walk, but for Anthony McNab, who makes the trip almost every day of the year, it's even longer and much more exhausting.

The 45-year-old travels up and down the alleyways and roadways between Kitsilano and Main Street, scouring sidewalks and dumpsters for bottles and cans that he loads into his shopping cart. It's an epic journey that spans up to 16 kilometres, and can take more than four hours.

If a new housing project is approved by the city, however, Mr. McNab's trip will be even more strenuous. The bottle depot United We Can, where Mr. McNab takes his containers, will have to vacate the Downtown Eastside. Currently, the depot employs up to 100 low-income people at a time and is lauded as one of the neighbourhood's few success stories. About 60,000 cans and bottles clang their way through the depot's doors each day, making it B.C.'s largest container recycling centre.

Although a bigger facility is needed to accommodate United We Can's growth, the depot has been a mainstay of the Downtown Eastside since 1995.

The idea of moving the recycling centre outside the area is not popular with recyclers, or "binners" as they are more commonly known, such as Mr. McNab.

"We need United We Can or some recycling depot in the Downtown Eastside," said Murray White, 54, a binner who also works at the depot part time.

For Mr. McNab, the main concern is that the new place will be out "in no man's land," adding that his full shopping cart can weigh up to 113 kilograms and is very difficult to manoeuvre. But ultimately, Mr. McNab said he will travel to wherever the new United We Can is located since he has "no choice." A successful trip for the binner translates into $20-$40 in containers, and if he doesn't rake in enough money, he doesn't eat.

The new location is not yet set in stone, but Geoffrey Howes, United We Can's chairman of the board, said an agreement with the city has almost been reached. If everything goes according to plan, the depot will move within the next year to a city-owned property in a nearby light-industrial area. The new facility will allow the depot to expand its services and employ more people, although Mr. Howes acknowledged that forcing binners to walk further to access the centre is unfortunate.

"In a perfect world, we would have found another location in the Downtown Eastside," Mr. Howes said, adding that finding a 6,000-square-foot industrial space in the neighbourhood is "virtually impossible."

Plans to relocate the depot from 39 East Hastings St., one block west of the supervised injection site, Insite, have been in the works for a couple of years. Atira Development Society, which owns the building, originally planned to renovate United We Can and incorporate it into its new housing complex at the site. Accommodating a ground-floor bottle depot proved too difficult, however, and the complex's designs (which were submitted to the city in November) no longer include the centre.

"We obviously have no interest in moving forward without United We Can having a place to be," said Atira chief executive officer Janice Abbott. But "the building is falling apart, so it's not a long-term location anyway regardless of what happens."

Rot is eating away at United We Can's floors, walls and ceiling, and the alleyway is too small for the trucks that pick up the bottles. Also problematic, Mr. Howes said, is that drug dealers set up shop right outside the depot's doors.

"It is a cash business," Mr. Howes said. The binners "get cash and get accosted outside … by somebody that might be trying to sell them drugs. It's not a good situation for anybody."

Once United We Can settles into its new location, Mr. Howes said it hopes to hope to develop a "hub-and-spoke model." If implemented, binners would be able to drop off containers at various collection sites around the city, including the West End and Strathcona. The containers would then be sent to the new facility where they'd be sorted. Consequently, Mr. Howes said, binners would not need to travel as far to exchange their bottles and cans.

"In the long run," Mr. Howes said, "once everybody gets used to [the new place], we think it's going to be way better." 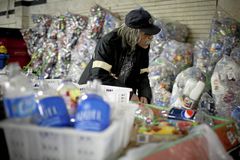 For dumpster divers, trash talks
June 21, 2004
The 'gold mine' deep in the dumpster
April 16, 2001
Follow us on Twitter @GlobeBC Opens in a new window
Report an error Editorial code of conduct
Due to technical reasons, we have temporarily removed commenting from our articles. We hope to have this fixed soon. Thank you for your patience. If you are looking to give feedback on our new site, please send it along to feedback@globeandmail.com. If you want to write a letter to the editor, please forward to letters@globeandmail.com.
Comments