Two of the six candidates for the leadership of the BC Liberals are officially asking supporters to make each other their second choice in the preferential ballot for the vote early next month – a measure that has prompted their rivals to accuse them of a desperation play.

The move by former cabinet ministers Mike de Jong and Andrew Wilkinson makes explicit the bid for support that may be under way more informally among campaigns ahead of voting from Feb. 1 to Feb. 3.

After 16 years in power, the BC Liberals faltered in the spring election. The NDP formed government with support from the three MLAs of the Green party, casting the Liberals into opposition. The party has since been intent on selecting a new leader, a successor to former premier Christy Clark, with party members making their choice next month with a preferential ballot.

Former cabinet minister Peter Fassbender, co-chair for the Todd Stone campaign, said on Sunday that both the de Jong and Wilkinson campaigns appear to have concluded they cannot win so their only hope is to shift supporters away from other second or third choices.

"I happen to think, personally, it's disrespectful to the supporters," Mr. Fassbender said in an interview. "If somebody signs up to support a candidate, that's great. That's the beauty of the process, but I think trying to herd them like cattle by making deals like that is old-style politics."

While camps may be talking about wooing second-place support, Mr. Fassbender said it was "somewhat odd" that the de Jong and Wilkinson camps were being so explicit about something that may be happening more behind the scenes. He said the Stone campaign will not be making any similar deals.

In interviews on Sunday, Mr. de Jong and Mr. Wilkinson said they are individually intent on winning, and becoming the leader of the BC Liberal party. However, both men said they have enough in common, including shared political values and experiences in rebuilding the party after its defeat in a 1996 election many expected the party would win, that they would be content with either being leader.

"To be clear, we both believe that we stand a good chance of succeeding, that we both see a pathway to victory and both will work energetically to secure that objective," Mr. de Jong said in an interview.

"At the same time, we both recognize this is a close race and party members have an opportunity to influence the outcome of their race beyond their first choice."

Mr. Wilkinson said he and Mr. de Jong both believe either of them can capably lead the party into the future.

"If we're to have the best chance of either Mike or I becoming the winner, it's appropriate for us to provide that second-ballot support to each other."

On Sunday, the Watts campaign ruled out any such deals. "(Ms. Watts) represents a new vision, and that's what it really comes down to – the past versus the future," Laura Ballance, a spokeswoman for Ms. Watts campaign, said in a statement.

"The idea that two candidates think they can tell party members who already feel that they are not listened to what to do with their vote is definitely the politics of the past, and more and more people are saying we cannot go into the next election led by voices from the past."

The campaign for Vancouver MLA Michael Lee declined comment on the situation. In an interview on Sunday, Sam Sullivan said Mr. de Jong and Mr. Wilkinson are "excellent candidates," acknowledging a reality of the race, namely it's unlikely there will be a winner on the first ballot, so support beyond that ballot is vital.

Mr. Sullivan entered the race musing that he might end up throwing his support to another candidate, but said Sunday he is in the race to the end, with one caveat: "I never rule anything out."

Over the course of the race, candidates have been signing up supporters to bolster their prospects of a win. According to the party, the membership has grown from about 30,000 members to 60,000 during the campaign.

The leadership race hits a milestone on Tuesday with the final debate amongst the candidates to be held in Vancouver.

BC Liberal candidate hires consultancy whose role in Brexit is under investigation
January 11, 2018 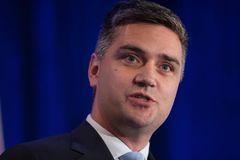