Vancouver councillors are preparing to spend millions to respond to overdoses in the city, but they say the money is only a Band-Aid and it's really up to the provincial and federal governments to tackle a crisis that is only getting worse.

"The provincial and federal governments are not doing enough," Mayor Gregor Robertson said Tuesday, as council discussed plans for money collected through a small increase in property taxes. "If this were any other cause of death, we would see a much more dramatic response."

Vancouver had 215 fatal overdoses last year, more than double any other city in the province. Across British Columbia, 914 people died. The death toll was highest in November and December, and council heard January is on track to be even worse.

The city is currently debating plans to raise $3.5-million through an extra 0.5 per cent property-tax increase to pay for its response to the crisis, which would include more money for overdose-prevention training, a new policing centre near the Downtown Eastside and an extra medic van. The provincial government, which declared a public-health emergency last year, has also been rolling out a series of measures, such as a medical unit in the Downtown Eastside and more spaces where users can inject, while Ottawa has struck a national task force.

But Mr. Robertson said it's not enough. He singled out the federal government in particular, saying Ottawa needs to step in and co-ordinate a national response to what he called a "horrific toll."

His comments echoed B.C's Health Minister Terry Lake, who last week called on the federal government to declare a national emergency. Federal Health Minister Jane Philpott said her government was already doing everything it could and declaring such an emergency would not offer any additional tools.

While B.C. has been hardest hit, Mr. Robertson said other Canadian mayors are worried as they see the same trend starting in their cities.

His fellow council member, Kerry Jang, said the province needs to pour much more money into real solutions, such as treatment on demand. "They've promised 60 beds, but we have no idea when they're going to come," said Mr. Jang, saying the rest of the province's announcements about the issue are just a "rehash" of old ideas and spending.

Health officials who spoke to the councillors at the meeting also added that the crisis is not going to go away until there is a significant change in treatment.

One key piece that's missing is legal alternatives for people to take instead of the street drugs that are being laced with fentanyl by dealers to provide a more powerful high.

"We need a whole host of substitution treatment and we do need injectable options," said Patricia Daly, the chief medical health officer for the Vancouver Coastal Health region. "This crisis is not going to end soon."

Dr. Daly also noted that B.C.'s coroner doesn't even have the specialized equipment needed to analyze whether carfentanil, an even more powerful drug than fentanyl, is implicated in some of the overdose deaths.

But not everyone was supporting the city's spending plan or the calls for more treatment from other levels of government.

Non-Partisan Association Councillor Melissa De Genova said some of the city's money should go to enforcement, in order to target high-level drug dealers who are responsible for the crisis.

Her colleague George Affleck also wanted to know whether there was any sign that dealers are intentionally contaminating their drugs in order to kill people.

But police superintendent Michelle Davey insisted that dealers are mixing fentanyl with other drugs in order to produce a more powerful high and generate more clients.

"It's not intentional" that dealers are killing some of their clients, she said. "They're not getting the science right." 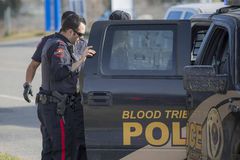