Frances Bula
VANCOUVER
Special to The Globe and Mail
Published January 6, 2012 Updated May 9, 2018

Vancouver's battle against the car downtown has been so successful that parking lots saw sharp declines in use last year.

Thanks to a 35-per-cent tax hike on parking, the seductive appeal of the Canada Line, and a mantra that cars are bad and any other form of locomotion is good, the city's parking corporation, EasyPark, saw a 9-per-cent drop in lot use.

Private companies also saw declines, though not as steep.

Now, the managers of the city-owned downtown lots are trying to figure out what else they might do with their increasing number of empty spaces – everything from mini-storage to roof gardens.

"By 2020, we're aiming to have less than half of the trips downtown by car," said Mr. Dobrovolny, who oversees a system where only about 60 per cent of people travel downtown in a private vehicle – already an unusually low number for a North American city.

It turns out 2011 was a key year in achieving Vancouver's ultimate goal. "There was a dramatic change in the system, with the new tax and the Canada Line. We had had a system that was in equilibrium and now we're all adjusting to a new reality," he said.

Mike Poirier, the regional vice-president for Diamond Parking operations, said the company saw small increases in its suburban lots near SkyTrain stations, which indicated to him that people were choosing to park in the suburbs and take transit for the last leg.

Bob Ransford, a Richmond-based development consultant, said he now frequently parks at the River Rock Casino – $2.50 for 24 hours – and travels downtown by Canada Line to save himself the hassle and cost of parking downtown.

Parking companies were also hit in 2011 with new taxes from two sources – a 21-per-cent increase from TransLink, and a 12-per-cent HST tax that was applied to the TransLink tax as well as the base price.

"That had a dramatic affect on parking," Mr. Poirier said. He also blamed new bike lanes for the drop.

All the changes are prompting Mr. Dobrovolny to wonder if the city can reduce even more of its requirements for parking in new buildings constructed downtown, if the pattern continues.

The city capped the number of public downtown parking spaces in 1997 at 35,000, in order to drive home the message that Vancouver was not going to do any more to accommodate cars. Since then, the city has seen the number of car trips into downtown decline steadily, even though the number of overall trips has increased as more people work and live downtown.

That's in stark contrast to almost every other North American city. In Toronto, the city parking managers aren't seeing any drop in demand for parking.

"We're not experiencing that in Toronto," said a somewhat bemused Gwyn Thomas, president of the Toronto Parking Authority, when told about the Vancouver situation. The Toronto authority brings in about $140-million a year and was only $11,000 short of that mark in 2011, he said.

"We're always creating new spaces where they're needed," Mr. Thomas said. As far as he knows, there's no drop in the number of cars coming into the city. 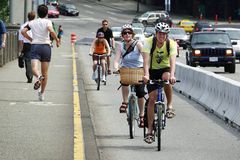 For cyclists - and motorists - it's an easy ride
December 15, 2017
Follow Frances Bula on Twitter @fabulavancouver
Report an error Editorial code of conduct
Due to technical reasons, we have temporarily removed commenting from our articles. We hope to have this fixed soon. Thank you for your patience. If you are looking to give feedback on our new site, please send it along to feedback@globeandmail.com. If you want to write a letter to the editor, please forward to letters@globeandmail.com.
Comments