Three rental buildings owned by a Vancouver family with a reputation as problem landlords are facing foreclosure proceedings, raising questions about the status of costly repairs ordered by the city at two other properties in the Downtown Eastside.

It's not clear how the foreclosure process will affect low-income residents living in more than 150 units across the three buildings, leaving some to worry they could lose their housing.

Peoples Trust, which holds the mortgages for the three properties, filed court documents last year alleging the Sahota family failed to pay off the mortgages when they came due in 2015. The amount owing on the three mortgages is nearly $7-million, the documents say.

"Demand has been made for the payment of the money owing to the Petitioner [Peoples Trust] … but this money has not been paid," says a petition dated Aug. 24, 2017, and filed in the Supreme Court of B.C.

That petition concerns a three-storey apartment block on East 5th Avenue in Vancouver's Mount Pleasant neighbourhood. As of July, 2017, $5.9-million was owing on that property, plus about $535.22 a day in interest, the petition states.

Peoples Trust has also filed similar petitions seeking foreclosure on two other apartment buildings, both of which have mortgages owing of less than $1-million.

One of the members of the family, Pal Sahota, did not return a request for comment.

The foreclosure proceedings come as the family is under city orders to conduct extensive repairs to two of its single-room occupancy (SRO) hotels.

Conditions at one of the family's buildings, the Balmoral Hotel, became so bad that last year the city ordered it closed because of significant fire and structural risks, resulting in a scramble to find new homes for about 150 people who had been living in the hotel.

Since then, the city has maintained that it wants the Balmoral restored as low-income housing. But no timeline or budget has been provided for that to happen.

The city has also issued citations at the Regent Hotel, another Sahota property, and ordered repairs.

Kaye Krishna, the city's general manager for development, buildings and licensing, said in an e-mailed statement that the city is unable to comment on the financial situation of individuals or businesses.

Ms. Krishna statement said that the city is continuing enforcement of building bylaws in the Sahota-owned Regent and Balmoral SRO hotels. She added that the city is actively pursuing 426 orders against the family for previous violations.

"The city prosecutor has approved a number of charges against companies controlled by the Sahota family and those matters are moving through the court system," the statement said.

Sahota family members own millions of dollars worth of real estate in the Lower Mainland, including SRO hotels in the city's Downtown Eastside that provide housing to some of the poorest and most vulnerable people in the province.

The family has a lengthy track record of bylaw violations and its buildings show up regularly on the city's rental database, which tracks rental properties that have bylaw violations.

Under the foreclosure process, owners have several months to make full payment, meaning that the fate of the three apartment buildings now in foreclosure proceedings won't be known until later this year. If payment isn't made, the lender would likely seek permission to sell the buildings.

Wendy Pedersen, a long-time housing activist in the Downtown Eastside now working with the SRO Collaborative, said she is worried losing these units will only exacerbate the city's rising levels of homelessness.

"I'm petrified because we're in a massive housing crisis and we can't afford to lose 200 to 300 units of housing," Ms. Pedersen said. "These are some of the last affordable units in the city and they're in atrocious condition … no surprise."

Brandy LaRocque, a 72-year-old semi-retired entrepreneur, has lived at 2178 Triumph St. for almost a year and only found out about the foreclosure two days ago, when someone acting for the lender handed her a notice as she exited the three-storey apartment building in east Vancouver.

She said she is now fighting to keep her and her neighbours in the building. The alternative would mean she has to "sleep in a tent – there's not many places that are open for seniors." 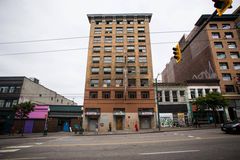 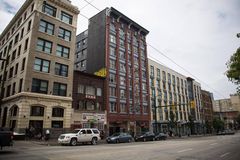 Follow Wendy Stueck and Mike Hager,  on Twitter @wendy_stueck @MikePHager
Report an error Editorial code of conduct
Due to technical reasons, we have temporarily removed commenting from our articles. We hope to have this fixed soon. Thank you for your patience. If you are looking to give feedback on our new site, please send it along to feedback@globeandmail.com. If you want to write a letter to the editor, please forward to letters@globeandmail.com.
Comments are closed