Vision Vancouver has been hyped for years as a municipal party that represented a new model of politics, one that got past the city's traditional division between left and right.

But can it survive the loss of its only leader to win the city, after Mayor Gregor Robertson announced this week that he won't be running for a fourth term as mayor?

That's the possibility that many are contemplating, especially since it's likely that a number of current Vision councillors won't be running again at the end of a decade of power that has generated controversies over everything from whether to limit foreign ownership of real estate to bike lanes.

The party's long-time critics, left and right, think Vision's middle-of-the-road political experiment is done. Its stalwarts deny that, though acknowledging the party needs to change.

"Vision is the party that's been able to unite people across the political spectrum," said one of Vision's longest-serving councillors, Raymond Louie, who plans to run again, although he's not sure whether he will try for the mayoral nomination or stay as a councillor. "The task for Vision now is to recapture that excitement … at this critical time for the city."

But even some within Vision don't imagine that the party will play the same dominant role it has for the past decade.

While insisting that the party has a lot of well-qualified potential new candidates showing interest, they acknowledge it may never be exactly the party it was when it swept to power in 2008, capturing every seat that it had candidates for.

"Vision won't be the monolith that it has been," says Councillor Andrea Reimer, a Vision member who won't be running again. To her, that's good. She said the lobbying the party did for 10 years to bring in campaign-finance reform now means it can't play the same dominating role.

Since 2008, Vision has excelled at raising money for campaigns, more than $2-million in the last one, which gave it a huge advantage over the smaller left-of-centre parties such as COPE, OneCity and Green.

Like many winning parties or candidates in the Lower Mainland, Vision raised much of that money from developers and unions. But corporate and union donations are now banned and there is a $1,200 personal limit for contributions.

Former Vision president Stepan Vdovine also said that while "Vision continued to be the most effective political vehicle in the city as far as basic support and political operations," the party will succeed only if members ask themselves tough questions about what it stands for in future.

But none of them think Vancouver is prepared to go back to its old pattern. From 1937, when the centre-right Non-Partisan Association was formed, to 2002, when a more centrist COPE was elected, the city was dominated by a big-right-versus-fractured-left divide – with the NPA mostly in power except for brief periods in the early 1970s and mid-1980s.

The NPA today has been re-energized by the news of Mr. Robertson's exit, although the party is still deciding on a process for a mayoral nomination.

That took a turn Wednesday when Glen Chernen, who created and ran with a small independent party in the last election, announced he will be running for the spot. Besides him, the NPA's mayoral candidate from 2014, Kirk LaPointe, has said he's considering running for the nomination, as has NPA Councillor Hector Bremner and former Conservative MLA Wai Young.

Vision is holding an annual general meeting Monday when it will decide on nomination dates and rules for new candidates. 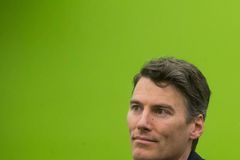