Two days before the gathering that would chose a new leader of the Roman Catholic Church, Canadian television producer Sebastian Gomes was walking with his boss in Rome when they encountered the future Pope, then still known as Cardinal Jorge Bergoglio.

The Argentine cardinal was by himself, and confided to them that he was nervous about the upcoming conclave. Nine days later, Mr. Gomes was in front of St. Peter's Basilica, a participant in the inaugural mass, sitting a few metres from the new pontiff.

The 28-year-old Toronto resident had been picked for a small but important role, giving the first Scripture reading at the event seen by millions around the world. "What a life experience," Mr. Gomes recalled this week, a day after returning from a month at the Vatican.

Mr. Gomes's memories give a backstage peek at a historic Vatican moment, and also reflect the great hopes believers have vested in the new Pope, whom they expect to reinvigorate an embattled church.

"The times have changed, and now the world demands that the Catholic church be one of greater integrity," said Mr. Gomes, a producer for the Toronto-based broadcaster Salt and Light Catholic Media Foundation.

Mr. Gomes and Salt and Light's CEO, Rev. Thomas Rosica, landed in Rome to cover the events after Benedict XVI resigned. The Vatican's press office soon enlisted their help to deal with 6,400 accredited journalists. The Sunday before the conclave, Mr. Gomes and Father Rosica ran into Cardinal Bergoglio, who was by himself near the Pantheon, wearing a suit and Roman collar. Father Rosica, who knew the cardinal, spoke to him in Spanish.

Mr. Gomes recalled that the cardinal appeared "very quiet, almost timid." They shook hands, and when the young Canadian told the cardinal he would pray for him, the prelate pressed Mr. Gomes's hand more tightly and said, "Please do!"

"I'm a little bit nervous," said the cardinal, who had been bruited as a papabile candidate.

A few days later, the cardinal was Pope Francis, and Father Rosica got a call from the liturgy office, which wanted Mr. Gomes to participate in the inaugural mass. It was a way of thanking the young man for the long hours he clocked in at the Vatican press office. At first, he was to give a short prayer to the faithful. The day before, however, he was handed a heftier task, doing the first of the readings. "It was quite an adjustment to make … we as Catholics put a very strong emphasis on the importance and significance of proclaiming the word of God in the Scriptures."

At the rehearsal the night before, Mr. Gomes was advised not to look up during his reading so he wouldn't get rattled by the sight of thousands crowding the square. "I was very daunted; I was very nervous," he said.

The next day, he headed out at 7 a.m. and went through several security checkpoints with Vatican police, then Swiss Guards. He was ushered to his chair, about 12 metres from the Pope and close to the sections for VIPs and church hierarchy.

As the mass began, he settled down. "You get caught in the moment. There's a certain calmness and peacefulness that takes over you." He read from the Book of Samuel, a passage in which David wishes to build a temple and is told by God that his house will endure. He then listened to the Pope speak in his homily about Joseph being entrusted to protect Mary and Jesus. The homily, Mr. Gomes said, was a reminder that many people associate the church with power and authoritarianism. "And here comes Francis, who turns it upside down," reminding the faithful that the church's role is to serve and protect, he said.

At a time when many young people in Western countries have drifted away from organized religion, Mr. Gomes said his faith was a spiritual anchor that gave him better insights into human nature.

Although raised a Catholic, Mr. Gomes said he didn't fully embrace religion until he studied at Saint John's University, a small liberal arts college in Minnesota where the most impressive people he met were also devout. "It was like I was walking through a door and the world was much bigger."

Why Pope Francis can open the doors of the Catholic Church to the future
March 16, 2013 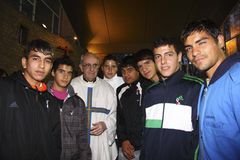 exclusive
Pope Francis, in the words of Cardinal Ouellet
March 15, 2013 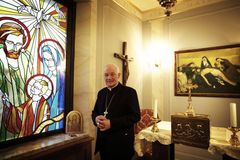