Inside a former furniture factory in sleepy Laurierville, Que., lies one of the world's most sought-after agricultural commodities. Something so symbolic that it has become a standard gift offered by Canadian diplomats abroad, so prized that it is now worth 25 times as much as oil.

Maple syrup. Thirty eight million pounds of it to be exact, stored in 62,800 barrels stacked five or six high. That is just over $100-million worth of sweet indulgence in one spot.

The Laurierville stockpile is the largest of three such storage sites in Quebec. Together, they form the presumptuously named Global Strategic Maple Syrup Reserve, a multiyear inventory making up what is believed to be the single biggest stash of maple syrup in the world.

What you will find here, just off of Highway 116, is a veritable treasury of golden-coloured nectar, a rich supply of syrup that comes in after harvest, some of which goes back out to a growing pool of consumers across the globe. Some will become part of the reserve that allows prices to stay relatively stable. Behind it lies a new effort by Quebec producers to market the breakfast staple as an everyday sugar substitute – and not just a pancake topping you might have once a month.

The Laurierville site is protected by a security system said to rival that of a commercial bank, which means much more is going on than the motion detectors and electronic access panels you can see with the naked eye. The windows have handles but do not open. Alarms will go off if anyone enters the building outside business hours, even employees. Cameras are everywhere.

It is not quite Fort Knox. But it is a veritable citadel of sap, in its own way.

The precaution was born from necessity.

Two years ago, thieves made away with six million pounds of syrup, worth about $18-million, from a temporary, rented warehouse. The elaborate heist was big news. Police recovered some of the stash, which now sits as evidence in a dark corner here as the investigation continues.

"Our insurance company asked for this [level of defence]," says Simon Trépanier, president of the Federation of Quebec Maple Syrup Producers, which owns and runs the new depot and the pasteurization equipment inside.

The significance of this warehouse is obvious in the statistics.

Quebec produced 71 per cent of the world's 160.7 million pound maple syrup yield in 2014, according to the federation. Most of it has ended up here, to be pasteurized and readied for export or become part of the cache. Ontario, New Brunswick and Nova Scotia also produce syrup, but in much smaller quantities.

Each barrel produced and stored contains about 620 pounds of syrup. (The industry works in pounds).

At this year's benchmark price of $2.92 a pound, negotiated between Quebec's federation and a group of 80 accredited buyers, each barrel is worth about $1,800 (Canadian) or $1,549 (U.S.) at current exchange rates. By comparison, brent crude oil, the world standard, closed out the year at $57.33 a barrel.

Global demand for maple syrup has been increasing at about 5 to 6 per cent a year since 2010, Mr. Trépanier says.

The federation's research shows that Canadian syrup has gained ground over the past two years in the United States, Germany, France and Australia in particular. Appetite for the sweet liquid has declined in Japan, the world's number two importer of syrup, but is holding steady in Britain. China, with a growing middle class that was once a syrup seller's dream, remains a marginal consumer.

"It never really caught on there," says Daniel Dufour, executive director of the Conseil de l'industrie de l'érable, which represents the main buyers and packers of maple syrup in Quebec. "It's not easy. Non-traditional markets have been difficult."

Quebec producers and distributors have shifted attention back to their established clients, betting they can sell consumers in advanced economies even more syrup. The pitch: Beyond its value as an occasional comfort food that tastes good, maple syrup also contains vitamins, minerals and other bio-active compounds that have significant health benefits compared with white sugar and other sweeteners. It also has a unique flavour that enhances other food. They are trying to get people thinking about it as a daily part of their diet instead of an occasional luxury item.

"In every kitchen in North America, you have salt. You have pepper. You have vanilla. You have honey most of the time," Mr. Trépanier says. "Why not have maple syrup?"

Quebec's maple industry is stepping up marketing efforts to sell the health benefits of its syrup. It is also excited about the possibilities for maple water (maple sap), bottling  almost 1 million litres in the province last year.

Traditionally, the United States has been the largest market for Canada's syrup, taking 73 per cent in 2008, the federation's research shows. By 2013 however, that had slipped to 66 per cent.

The reasons? Competition for one.

U.S. states such as Vermont and Maine have dramatically ramped up production over the past two years in particular, while others that were relative unknowns until recently, such as Ohio and Wisconsin, have jumped into the game. New York and Maine each made more maple syrup last year than Ontario.

"I think there's lots of room [for maple sales to grow]" in both Canada and the United States, says Robert Carter, executive director of market research company NPD Group. "Some of the big operators like Tim Hortons are doing maple-flavoured donuts and what not. But I think it's just scraped the surface. We're going to see more and more of the larger quick-service operators introduce maple flavouring on some of their mainstream menu items."

Free-market supporters have called Quebec's maple industry, and Mr. Trépanier's federation, a cartel. And it is – albeit a government-sanctioned one.

Producers voted in a referendum in 1989 and decided to work together to sell their syrup, which arrives at the federation's facilities by truck and then is inspected for quality by a third-party specialist. Buyers have up to a year to pay for the syrup, and the federation even offers them a margin of credit to help finance the purchase if needed, at a low interest rate.

The genius of the strategic reserve, according to Mr. Trépanier, is that it offers a guaranteed supply of quality-certified syrup that commands a minimum price and spurs further demand. That in turn allows producers to escape the volatility of years past when weather ruined the tree crop or delivered a bounty that no one wanted.

Actuaries hired by the federation in 2010 calculated that the ideal reserve size is between 40 and 50 million pounds. Any higher and producers might be forced to offer steeper rebates. Any lower and the price could jump enough to curb future sales. It is currently at about 65 million.

All Quebec producers using containers more than five litres have to sell through the system. A small band of outliers still refuses to take part, and the federation is suing them.

"Basically, they are free-riders," Mr. Trépanier says, adding that, even if they do not want to be involved, the dissenters benefit from the system.

"This is the only place in the world like this," where this much syrup supply has been amassed, says Caroline Cyr, the federation's communications director. "We're protecting our market. Some people want an open market. But they don't realize the societal benefits of this method." 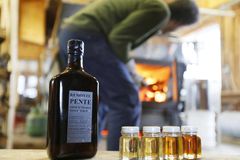 Why 13 new citizens decided to become Canadian
December 10, 2014
Follow Nicolas Van Praet on Twitter @NickVanPraet
Report an error Editorial code of conduct
Due to technical reasons, we have temporarily removed commenting from our articles. We hope to have this fixed soon. Thank you for your patience. If you are looking to give feedback on our new site, please send it along to feedback@globeandmail.com. If you want to write a letter to the editor, please forward to letters@globeandmail.com.
Comments