Minutes after conquering Niagara Falls, Nik Walenda told the world he is already planning his next performance — he doesn't like the word stunt.  He wants to be the first person to walk across the more than a mile high Grand Canyon in Arizona, and he already has the permits. Within the next three to five years, and probably sooner, the world's most famous daredevil will take another walk into history.

People follow many routes from the United States to Canada, but nobody does it the way Mr. Wallenda, 33, did on Friday night. He crossed the border on a 2-inch thick swaying wire strung 46 metres above the majestic roar of Niagara Falls, a natural wonder that has awed spectators since before history was recorded. The helicopters hovered, the stadium lights were on, the television cameras poised and the happy and hopeful multitudes had assembled to see him tiptoe across the 550 metres long cable, buffeted by the wind and mist swirling above the falls.

With his father's encouraging voice in his ear piece, praising the Lord all the way, and carrying his passport to present to authorities, Mr. Wallenda talked into history Friday night by a daredevil feat that had more than 100,000 spectators holding their breath. Just before he reached the end of the journey, he raised his right arm in a salute to the cheering crowd, bent on one knee and sprinted the last few steps to where his wife and children were waiting to embrace him.

"The mist was so thick, so challenging, those winds hit me from every which direction, was definitely more than I expected for sure," Mr. Wallenda said moments after reaching the Canadian side of the falls.

"My forearms start[ed] to tense up and at that point you just feel like running in if you could, but you can't, you gotta take your time, step by step."

Just before 10 p.m. on the American side of Horseshoe Falls, he had put on the safety harness that broadcaster ABC insisted he wear if they were to televise his walk. Then he zipped up his red and black rainproof windbreaker and held hands with his family in a group prayer circle. At about 10:15, he stepped gingerly out onto the wire and began the most momentous journey of his life.

Watchers on the Canadian side peered into the mist and suddenly there he was, almost halfway across the gorge, a tiny red and black figure holding a nearly 40 pound balance pole, emerging out of the mist as though he were walking on air. The television cameras broadcast a more terrifying sight as Mr. Wallenda bobbed and struggled in the rain and wind to hold his balance on a wire that was writhing and undulating like a living creature.  For a few seconds that seemed to stretch into eternity, his exhortations to the Almighty became louder and more insistent. Otherwise, there was no indication that the preternaturally calm Mr. Wallenda might be in trouble.

He's the first person to cross the gorge since James Hardy, the youngest funambulist, at 21, ever to dare the fates, performed the stunt in 1896 and survived.  But nobody has crossed directly above the falls before.  "It is life or death," Mr. Wallenda said later, "but I don't see it that way.  To me it is normal." He said his feats are 80 percent mental and 20 per cent physical.

Spectators pressed against steel barriers craning for a better glimpse of Mr. Wallenda as he slowly and carefully made his way toward safety.

"I've never been so close to something this amazing," said Richard Balicki, a Lyons, Ill., resident.

Mr. Balicki said he knew Mr. Wallenda would make it, but added that he lost a little confidence when he finally saw the daredevil emerge from the mist.

"It's beyond my understanding," said Barbara Warren, who has been a resident of Niagara Falls for all of her 66 years of age.

"This is the most exciting thing I've seen here through my years," she said.

Ms. Warren said she walked close to the falls earlier in the day and felt sweat on her hands. It wasn't nervousness, she said, but a sense of the risk involved.

Her good friend Erhard Kern said simply, "I wouldn't do it."

The temperature dropped sharply with nightfall and many in the crowd donned rain jackets and huddled close to one another to guard from the mist and the cold.

"We came to see the guy make it," Steve McDonald a retired computer technician from Brampton, Ont., said as the crowds waited for the walk to begin. "but if he don't, I'll have it on camera."

He came with his partner, retired nurse Fiona McFarland. They met in kindergarten 52 years ago, spent their honeymoon in Niagara Falls in 1974, divorced five years later and got back together in 1992. She loves the Falls – "because of our honeymoon," he interjected. "He doesn't like coming and I do, so this was one way of getting him here," she said of the chance to see Mr. Wallenda defy gravity.

Niagara Falls was the same as ever on Friday: breathtaking torrents of water that subsume touts of every description and myriad dare devils. From that perspective, the day began like any other hot sunny day at the Falls. By mid afternoon, it was beginning to get crowded with people surging toward the viewing platforms. A policeman walking the road next to the gorge with Nia, his German shepherd, said two agencies, the Niagara Regional Police and the Niagara Parks Police Services, would be on hand to do crowd control for the anticipated 80,000 to 120,000 people. A few tourists were sporting "Nik Wallenda, Walk Into History" T-shirts.

The smell of water and spray hitting the pavement was mixed with sun screen. Sixty metres below the precipice, the Maid of the Mist ferried passengers like a toy boat sliding across a green marble floor striated with white foam. The mood of the crowd was probably similar to the mix of dread and ghoulishness that drew crowds to public executions a century ago. In the distance, the 1,800-foot two-inch wire (550 metres set 60 metres above the water) stretched across the gorge. Although nobody admitted it, many were asking themselves: Will he drop?

As evening cooled the air, a full rainbow stretched across the gorge like a multi-coloured horseshoe. Inside the casino, Ringo Starr had moved his show up to 6 p.m. so he too could watch the spectacle. Outside, lead singer Scott Nielson and his band Jonesy from St. Catharines, Ont., rocked the crowd with Rod Stewart's Maggie May and Neil Diamond Sweet Caroline.

The falls, not Mr. Wallenda, drew Eugene and Elizabeth Kotey of Toronto because they had family visiting from Ghana for their son's wedding a week ago; they wanted to show their relatives our most famous natural attraction. "This is a nice tourist area," said Mr. Kotey's brother Samuel. "Fortunately, we will witness this historic event." His sister, Margaret Odi, said the falls were much bigger than she expected. As for Mr. Wallenda, "He has our hopes," said Mr. Kotey. "And our prayers," his wife chimed in quickly.

Prayers weren't necessary, according to retired roofer Bruce Gregory of nearby Wellandport, Ont. He's been hanging around most of the week and saw the satellite trucks arrive to set up the wire on Tuesday. He watched the Wallendas as a kid on television, and he stood in line to meet Mr. Wallenda on Thursday. They ended up chatting for 10 minutes because they are both professionals when it comes to keeping their balance at high altitudes and they had experiences to share.

"Whatever you do for a living, you just do it," he said.

And that's certainly what Mr. Wallenda did on Friday night.

With reports from Matthew Robinson and The Canadian Press 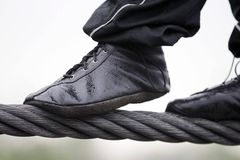