Privacy officials in Britain and British Columbia are investigating how a Canadian technology company may have helped sway last year's Brexit vote.

AggregateIQ, a Victoria-based data-analytics firm with only 20 employees, has fallen under scrutiny in recent months after it was revealed to have played a key role in Britain's Vote Leave campaign. It had been hired to help influence voters in the referendum campaign, which saw a narrow majority cast ballots in favour of Britain leaving the European Union.

No specific allegations of any wrongdoing are being levelled against AggregateIQ. But questions about its role in the campaign have surfaced since early this year, when Britain's Electoral Commission revealed that the Vote Leave campaign paid the Canadian company £2.7-million ($4.6-million) for political work out of a total budget of £6.8-million.

In statements this week, both the U.K. Information Commissioner Elizabeth Denham and the B.C. Office of the Information and Privacy Commissioner explicitly said they are each using their respective legal powers to probe AggregateIQ.

In a world in which data are increasingly crossing borders, the legal powers of privacy officials are typically confined only to the territories they are empowered to oversee. In this case, however, potential partnerships are made easier by the fact that Ms. Denham is a Canadian who headed the B.C. privacy office for six years, before becoming Britain's Information Commissioner.

"We're looking at how personal information was analyzed to target people as part of political campaigning and have been particularly focused on the EU Referendum campaign," Ms. Denham said in a blog post released this week.

She added that "we are concerned about invisible processing – the 'behind the scenes' algorithms, analysis, data matching, profiling that involves people's personal information."

The statement added that her office "will be using every available legal tool and working with authorities overseas to seek answers on behalf of U.K. citizens."

It is in this context that privacy watchdogs in B.C. formally confirmed this week they are also looking into AggregateIQ. "The Office of the Information and Privacy Commissioner for British Columbia has initiated an investigation into whether AggregateIQ is compliant with our private-sector privacy legislation," spokeswoman Michelle Mitchell said in a statement.

She said that the provincial body will use its own legal powers to "look at the collection, use and disclosure of personal information" but may prevail upon the British watchdog agency for help. "We may, as part of our investigation, request information from that office," Ms. Mitchell said.

AggregateIQ didn't immediately respond to questions on Thursday. But in May, its founders e-mailed The Globe to say they would comply with any probe. "We've nothing to hide and will co-operate as best we can to assist in the investigation," company co-founder Jeff Silvester said in an e-mailed reply to questions.

When asked why so much British political money went to a small Canadian company, he said that "we are good at what we do. Most of the money we received went to effective digital advertising campaigns on Google and Facebook."

Early this year, another one of the AggregateIQ's co-founders told The Globe that he got involved with B.C. Liberal Party politics before starting the company in 2013.

"Coming from the technology and business world, I saw that the way campaigns were being run was wildly inefficient," Zack Massingham said. 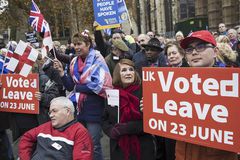 Opinion
What can really be done about foreign influence in elections?
August 18, 2017 Tough talks still ahead as Britain, EU strike historic Brexit deal
Subscriber content
December 8, 2017
Follow Colin Freeze on Twitter @colinfreeze
Report an error Editorial code of conduct
Due to technical reasons, we have temporarily removed commenting from our articles. We hope to have this fixed soon. Thank you for your patience. If you are looking to give feedback on our new site, please send it along to feedback@globeandmail.com. If you want to write a letter to the editor, please forward to letters@globeandmail.com.
Comments