More than 1,300 pages of emails from Ontario Liberal staffers were released concerning the controversial closing of two power plants. The most interesting and revelatory exchanges are outlined below. Read the related story.

On July 10, 2012, the government reveals the tab for scrapping the power plant in Mississauga midway through construction: $190-million.

The next day, Liberal staffers react to a statement by then-Energy Minister Chris Bentley over who made the controversial decision to pull the plug.

Mr. Bentley, who was appointed Energy Minister following the 2011 provincial election, does not say who made the decision to pull the plug.

He tells a legislative committee that it was the Liberal re-election campaign that made the decision. 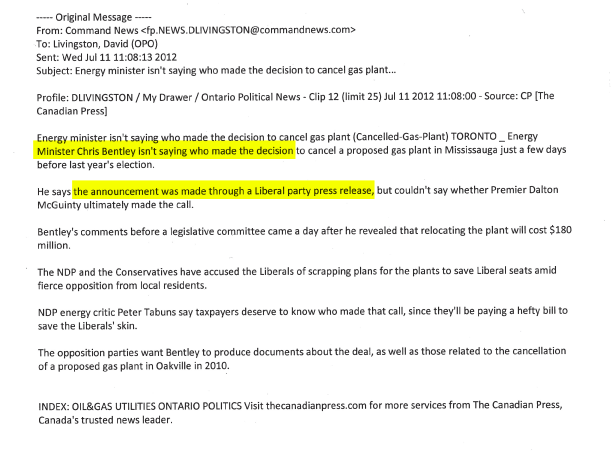 This does not go over well in then-Premier Dalton McGuinty’s office. His chief of staff, David Livingston, forwards news stories quoting Mr. Bentley to his deputy, Laura Miller, along with his shocked comment: “Really?!”

In an effort to regain control over the narrative, Ms. Miller says Mr. Bentley must “communicate and own it,” according to a July 11 e-mail. “Governments make the decisions here not OLP Platforms or Press Releases.”

Neala Barton, Mr. McGuinty’s press secretary, is dispatched to tell Mr. Bentley he needs to make it clear that it was the Premier who made the decision, not the campaign.

Only 19 minutes after Ms. Barton said she was on her way, she reports back with his reaction. “Response: ‘duly noted,’” Ms. Barton says in an e-mail. “He says he’ll consider a change.”

He did indeed change his tune. There was little mention of the campaign after that.

On Sept. 13, 2012, the Speaker of the legislature rules evidence exists that then-Energy Minister Chris Bentley breached his privileges by refusing to release gas plant documents to a legislative committee. The ruling leaves Mr. Bentley facing a rare contempt of Parliament censure.

Neala Barton, press secretary to then-Premier Dalton McGuinty, suggests a good news story to divert attention from gas plants: the government will ban the use of tanning beds by people under the age of 18.

The announcement generated significant press coverage at the time including a story by The Canadian Press published by The Globe. 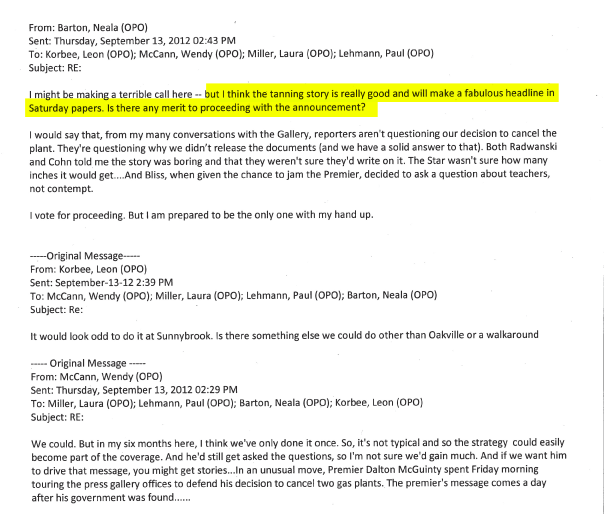 The Speaker of the legislature said all three parties have until Sept. 24, 2012 to reach an agreement on when the gas plant documents should be released.

Liberal staffers believe releasing the documents would be the “worst case” scenario and made contingency plans to guide the narrative through the media.

The Friday before, Laura Miller, deputy chief of staff to the Premier, says in an e-mail to three of Mr. McGuinty’s closest advisers – Chris Morley and Don Guy, both former chiefs of staff, and his brother, Brendan – that she is “planning for the worst case” scenario, because it does not look like the opposition will agree to delay the release of the documents.

Ms. Miller’s Sept. 21 e-mail lays out a media strategy for the next seven days, beginning on Sunday with government House Leader John Milloy issuing a statement, “slamming the opposition for putting politics ahead of public interest.”

On Monday afternoon, release the gas plant documents to the media. On Tuesday, have the Premier travel to Oakville for media availability “surrounded by supporters of decision [to cancel the plant in that community].”

That same day, Mr. Milloy pledged in an interview with The Canadian Press to release the gas plant documents on Sept. 24 – a deadline that the Premier had suggested was merely when the house leaders had to agree on when to release the documents. 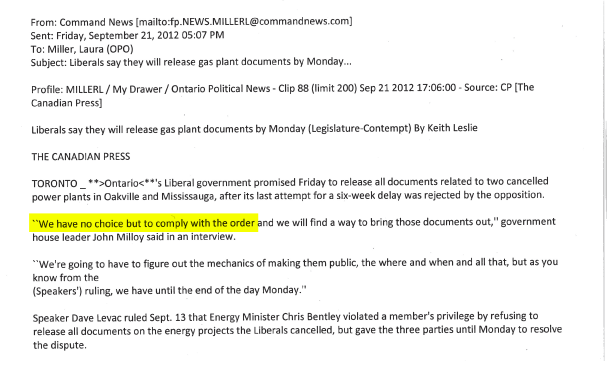 Ms. Miller expresses her frustration with Mr. Milloy for not sticking to his “key messages” and considers muzzling him.

“I know we have this preference to put out elected officials,” Ms. Miller says in a Sept. 21 e-mail to Neala Barton, the Premier’s press secretary. “But strike him off the list. This is the second time he’s done this.”

However, the Premier’s office does not follow through on the threat and Mr. Milloy continues to speak on behalf of the government.

In politics, Ms. Miller says in response to questions from The Globe, “wires get crossed on occasion. In this instance, I chose to express my frustration in a private email exchange and then move on.”

Another string of e-mails the same day reveals attempts to pressure the Speaker into changing his ruling.

Ms. Miller says her fellow deputy, Dave Gene, is putting the “member from Brant” – a reference to Dave Levac, a Liberal MPP who represents the riding of Brant – “on notice that we need better here.”

The Speaker does not change his mind on his ruling, later saying he has never bowed to pressure.

“I have never felt unable to make an informed, objective and procedurally sound decision, free of political interference,” he said in a statement after the e-mails were made public.

“The fact that the ruling did stand should also speak for itself.”

In her testimony at a legislative committee probing the power plant cancellations, Ms. Miller said the “quickly-written” e-mail exchange regarding the Speaker has been “misinterpreted and torqued.” She said it was her intention to inform the Speaker that she was unhappy with the Progressive Conservatives, because she said they were determined to pursue Mr. Bentley for contempt, regardless of whether the government released documents on the power plants.

The Liberal chairman of the committee barred questions on the e-mail exchange.

On Oct. 2, opposition members pass a motion to further investigate the decision to cancel the power plants by referring it to the Standing Committee on Finance. The committee is also to determine the fate of then-Energy Minister Chris Bentley, who could still be found in contempt even though some documents have been released.

The night before the motion, David Phillips, chief of staff to government House Leader John Milloy, weighs the pros and cons of proroguing the legislature in an e-mail to his counterpart in the Premier’s office.

Chief among his reasons for proroguing is the threat of an election in 2013 – just six months away. Proroguing now would give the party “the ability to determine how we spend at least the next 2.5 of those 6 months,” he says.

Mr. Phillips was also concerned the Premier (dubbed “P” in this e-mail) would have to testify at both the ongoing committee hearings into the Ornge air ambulance service and the upcoming gas plant hearings.

Finally, Mr. Phillips considers the political “blowback” of proroguing and the appearance of “running and hiding.”

The Liberals eventually decide to prorogue the legislature two weeks later on Oct. 15. 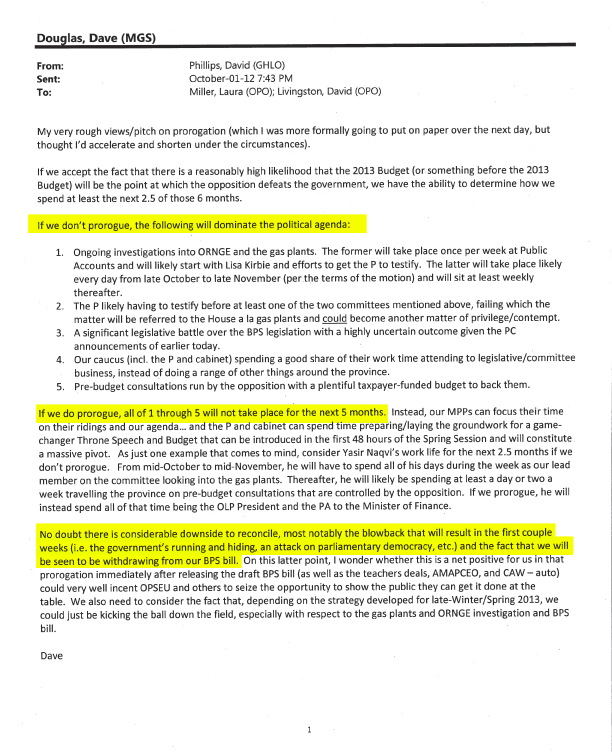 On Oct. 15, then premier Dalton McGuinty stuns his caucus and the public by announcing that he is proroguing the legislature and stepping down after nine years in office.

The next day, his advisers get the word out to the media that the gas plant controversy has nothing to do with the decision. Proroguing, they said, would enable the Premier to reach a wage-freeze deal with public-sector workers.

In an e-mail to staff in the offices of the Premier and the Finance Minister, Mr. McGuinty’s deputy chief of staff, Laura Miller, recaps what she told Toronto Star columnist Martin Regg Cohn: “started to hear from labour. realized we could pursue an outside path. best way to set up labour path for success was to limit rhetoric and bring down the temperature.” 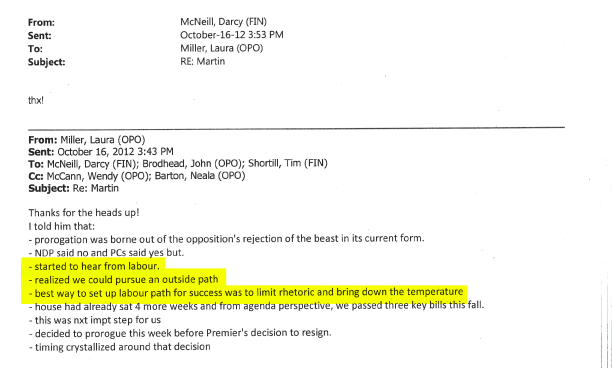 Resulting telephone calls and e-mails from Globe and Mail reporter Karen Howlett, regarding the Premier’s meetings with his inner circle the weekend before his announcement, provoke enormous angst.

“I told her conversations this weekend were simply related to P’s decision and how to communicate it,” Ms. Miller says.

“She’ll f... us,” responds Chris Morley, a former chief of staff. “Suspect Bentley is her source.” 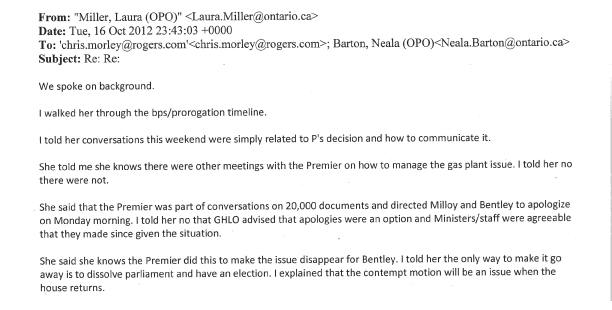 The Saturday evening following then-Premier Dalton McGuinty’s announcement, his advisers hatch plans for an alternative “news/controversy plan” to stem the backlash over prorogation.

Chris Morley, his former chief of staff, outlines the week in media availabilities, including an appearance on TV Ontario’s The Agenda with Steve Paikin and an interview with John Tory, a radio host and former Progressive Conservative leader.

He says they plan to give The Canadian Press a story about Mr. McGuinty deciding not to run for a federal position. 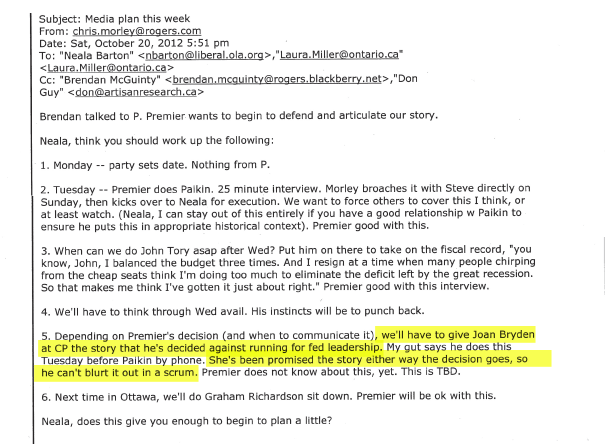 While Mr. Morley indicates the Premier decided against running for a federal spot, Don Guy, the political strategist behind the Liberals’ three campaign victories, floats the idea of keeping the story alive for the time being. He also suggests launching an attack against Deb Hutton, the wife of Progressive Conservative Leader Tim Hudak and once the chief of staff to former premier Mike Harris.

“I think we also leak tomorrow that the Premier has been taking calls this weekend and is discussing the leadership with his family with an intention of making a decision early this week....We need a parallel news/controversy plan also for this week that is as salacious as the bullshit,” Mr. Guy says in an e-mail. “Finally, we need a daily attack on the Hutton-Hudak connection? Perhaps release a video? Radio ads?”

Mr. Guy says in an e-mail response to questions from The Globe that he wanted an “alternative narrative” to the gas plants, but he never pursued the attacks.

“You think about a lot of contingencies in politics,” he told The Globe, “but some are wrong and the premier would have vetoed it.”

Karen Howlett from The Globe and Mail asks government officials why they paid a group of hedge fund lenders to the company building the Mississauga power plant $149-million, more than double the $61-million they had lent on the project.

John Brodhead, a deputy chief of staff in the Premier’s office, responds that, “It is critical that we get her a response that includes the $300M # (the amount the hedge funds were seeking from the government in lawsuits) – she cannot keep on the track of 61 vs 149 – the comparator is 300 vs 149.”

Jennifer Kett, a spokeswoman for then-Energy Minister Chris Bentley, discusses how the government should respond with the premier’s office: “I think the fact they were suing for $300 m should say they wouldn’t accept just payment of $61 m,” she says in a Nov. 5 e-mail.