After days of deliberation, a jury found a Calgary psychiatrist guilty Monday on three counts of sexual assault against his male patients.

Dr. Aubrey Levin stood quietly and without outward emotion as he was found not guilty on two counts and a mistrial was declared on four other counts. Court will reconvene on those matters on March 15 to set a date for a new trial.

Sentencing on his three sexual assault charges is scheduled for Wednesday afternoon. Dr. Levin will remain free until then despite an application by Crown prosecutor Dallas Sopko to take him into custody immediately.

He said Dr. Levin is now a "convicted serial sex offender" and the Crown will be seeking a prison term of four to seven years.

"It's no longer all about the accused. It's about the victims as well," said Mr. Sopko.

"We take the position these are minor sexual assaults and the only aggravating factor is the violation of trust."

Mr. Archer said Dr. Levin's wife, Erica, who is facing obstruction of justice charges after a juror was allegedly approached two weeks ago and offered an envelope full of cash in return for a not guilty plea, is gravely ill. He said having a couple of days with his wife is a "humanitarian issue."

"He's not going anywhere," Mr. Archer said in court. "His wife has been accused. It is not his sin. I see it as an act of desperation on her part."

The allegations against Erica Levin have not been proven in court.

Her lawyer, Allan Fay, told reporters Friday he was arranging to have his client examined by a psychiatric expert. He said the trial has impacted her physically, emotionally and psychologically, saying: "This is a woman who for the past three years has lived with her husband through hell."

Over the weekend, the jury had indicated they were unable to reach a unanimous verdict on any of the charges against Dr. Levin, but Justice Donna Shelley implored with them to keep trying.

The nine patients had been assigned to Dr. Levin through the courts between 1999 and 2010.

The allegations against Dr. Levin came to light in 2010 after one of his patients came forward with secret videos he recorded during court-ordered sessions with the psychiatrist.

The videos, played in court last fall, show Dr. Levin undoing the man's belt and jeans and appearing to fondle him.

The patient, identified only as R.B. in court, was on probation at the time the videos were taken and had been ordered by a court to see Dr. Levin twice a month.

The man said he had told authorities about previous assaults and no one believed him, so he bought a spy camera and brought it to his appointments.

Dr. Levin said he was only performing a physical examination to test for sexual dysfunction, but the jury sided with R.B. and found Dr. Levin guilty.

Crown prosecutor Bill Wister appeared relieved that the jury finally came back with a guilty plea.

"This is a six-week trial that took four months," said Mr. Wister.

He also paid tribute to R.B. for coming forward in the first place. He said despite having a five-page criminal record, a diagnosed mental illness, and alcohol and drug addiction problems, the man did the right thing.

"For him to step forward and be the catalyst for stopping this particular sexual assault – as ironic as it sounds – the community owes a sense of gratitude to this individual for taking the courage to go forward with that," said Mr. Wister.

After Dr. Levin was arrested, other former patients came forward with abuse allegations.

Dr. Levin, who immigrated to Canada from South Africa, was frequently used by the courts to assess people and provide expert opinions at hearings.

He served briefly as regional director for the Regional Psychiatric Centre in Saskatoon and was licensed in 1998 to practise psychiatry in Alberta.

Dr. Levin is no stranger to controversy over his work as a psychiatrist. He faced heated accusations about his time as a military psychiatrist during apartheid in South Africa, where he earned his degree in 1963.

In the 1970s he was a psychiatrist at a military hospital where aversion therapy through electric shocks was allegedly used in an attempt to change the sexuality of gay soldiers. Dr. Levin is mentioned in a report entitled "The aVersion Project" that aimed to shed light on abuses of gays and lesbians in the military by health workers.

Media coverage of the South African Truth and Reconciliation Commission said Dr. Levin was named in a human rights submission as a key figure in the abuse of gay men in the military. It acknowledged the submission was based on anecdotal reports.

Dr. Levin has denied abusing any patients under his care and has argued that the submission was based on a distortion of facts, according to an article in the South African Medical Journal. 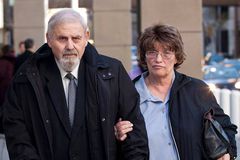