This place used to be called the "drowning machine."

Wayward rafters floating along the Bow River through downtown Calgary would ignore the warning signs, tumble over a man-made weir and get sucked helplessly into the relentless churn. Fourteen people have died in the past three decades – something a group of local volunteers spent years hoping to change.

Now, more than a decade after their vision first surfaced, the drowning machine has been transformed into an $18-million whitewater paradise for experienced paddlers and thrill-seekers. Considered unique in Canada, Calgary's new Harvie Passage is becoming a mecca for athletes as well as sightseers, who are enjoying the facility's first summer in operation. This may also just prove to be a safety project that happens to pump out the next generation of Olympians.

"I think that the benefits will come out in the next five to 10 years of it," said Mike Holroyd, head coach of Alberta Slalom Canoe Kayak. "I think we're just seeing the tip of the iceberg. This could really be a huge opportunity."

A weir was first built across the Bow River near the Inglewood neighbourhood in 1904 to divert water for agriculture. It was later rebuilt, and by its mid-1970s remake, it became the weir that was blamed for killing so many.

Warning signs and large, brightly coloured buoys, as well as placards, directed people to the portage escape route on land. Still, people carried on. The weir looked deceiving. The low-head dam allowed the water to roll over it, but it hid a deadly recirculating hydraulic wave.

"The actual 1.5-metre drop of the drowning machine really was very difficult for anybody to survive," said Myrna Dubé, chief executive officer of the Parks Foundation Calgary.

Members of that non-profit group spearheaded the move to get rid of the weir in the late 1990s. Studies were conducted and eventually the project was approved.

Derek Lovlin, Bow operations and infrastructure manager with Alberta Environment and Sustainable Development, said an overhaul to make the weir "truly safe" would cost about $50-million. Instead, officials optimistically hoped to re-engineer the river for $5-million to $8-million.

Construction began in 2009 to convert the weir, as well as build eddies, holes and other whitewater features to ease the big drop, while water would still be used for irrigation. It would take almost three years – and $18-million – to complete. The province kicked in most of the money. The other large donor, the Harvie family, gave $3-million.

Harvie Passage features two channels – the main is a Class 3 rapids for expert paddlers. The other, contains less turbulent Class 2 rapids, but even this channel is not meant for rookies. Safety gear – such as helmets and life vests are required – and inexperienced paddlers should portage around.

Local wildlife was also considered in the makeover. Each summer, flocks of great white pelicans would gorge on disoriented fish easily picked off in the undertow. Now, there are slots to allow fish to swim upriver and give them an edge.

Most days and evenings this summer, serious paddlers are out training and playing in the passage.

Dallas Wilkins and Per Nese, oilfield workers and long-time paddlers, have been eying the passage all summer waiting for ideal conditions for a first rip through the rapids in their whitewater tandem canoe.

"It's amazing to have something like this in the city," Mr. Nese, 49, said on Sunday. "We usually have to go to the mountains."

Still, as Mr. Wilkins, 40, watched a 13-year-old girl tackle the rapids in a flimsy raft, he said he worries people will think because it's man-made in the city, it's going to be "100 per cent perfectly safe."

Heavy spring rains and late snow melt from the Rocky Mountains created a high, fast-flowing river, which prompted city officials to warn people to stay away from the waterway for most of the summer.

But during the Canada Day weekend, a raft carrying four people launched, and despite specific warnings from officers to avoid the Harvie Passage, the group went over and flipped. A 44-year-old man later died. Just last week, a woman went into the river, slipped through the rapids, but survived.

Calgary Fire Department has been involved in about 300 river rescues this year – 198 of them at Harvie Passage. That's only up to July 3, but it's dramatically higher than the few calls to the old weir in past years.

"I know we've plucked a number of people off at the boom there," said Brian McAsey, the fire department's assistant deputy chief. "Sort of their last chance to hang on. Very scary circumstances."

Removal of the weir is an improvement, according to police and fire officials.

"We know there are still dangers in the water," Mr. McAsey added, "So we do go to that area of the water quite a bit and we know that people can get in peril there too. They don't realize the dangers."

For the province, success of the project is tough to define, especially in light of the death.

"It is safer," Mr. Lovlin said, "It's not a waterslide. It does require some expertise."

"What's a success?" he added, "Successful in the sense that it's no longer a killing machine any more. No question about that in my mind."

Ride a raft in the Rockies and live to tell the tale
August 8, 2012 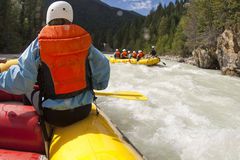 How a canoeist got frisked for stumbling into Harper’s picnic
August 14, 2012 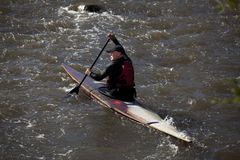 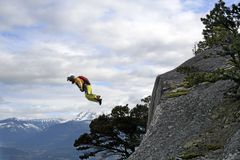