Environment Minister Catherine McKenna and her British counterpart, Claire Perry, will launch an international alliance to phase out coal-fired electricity at the Bonn climate summit this week, signalling a sharp contrast to U.S. President Donald Trump's promotion of coal as an important global energy source.

Ms. McKenna will take the stage at the annual United Nations climate summit to showcase Canada's efforts to reduce greenhouse gas (GHG) emissions, including a national carbon pricing plan and federal-provincial moves to shut down traditional coal-fired power by 2030.

As the minister touts Canada's record at the UN summit, some critics at home argue the Trudeau government is not living up its lofty rhetoric on climate change.

The United States, meanwhile, will use its platform at Bonn to highlight the Trump administration's support for coal and other fossil fuels. At a Monday event, U.S. officials will join industry representatives at a panel discussion on "the role of cleaner and more efficient fossil fuels and nuclear power in climate mitigation."

U.S. Energy Secretary Rick Perry is proposing an American-led alliance that would encourage developing countries to invest in more efficient coal plants. In contrast, Ms. McKenna and Ms. Perry will tout their countries' plans to phase out coal-fired power as a model for the world and will aim to rally international investors to finance lower-carbon options rather than coal.

As Mr. Trump prepares to withdraw the United States from the Paris climate accord signed two years ago, Prime Minister Justin Trudeau and his high-profile Environment Minister are eager to play a leadership role in keeping the world on track to meet the Paris commitment to limit the increase in global temperatures to less than 2 C above preindustrial levels.

In an interview in her Parliament Hill office, Ms. McKenna said the Liberal government is not only committed to meeting its Paris target of cutting GHG emissions by 30 per cent below 2005 levels by 2030. It will go further and adopt a more ambitious target in the coming years under a "ratcheting" provision set out in the Paris accord.

"We all know we have to be more ambitious," the minister said as she prepared to fly to Bonn this weekend. "The first thing you have to do is have a plan; you have to implement your plan, and then you have to ratchet up ambition. That's part of the Paris Agreement, and that's what we're absolutely committed to doing."

Since concluding a federal-provincial climate deal last December, Ottawa has announced a ream of planned policies to reduce GHG emissions, but it has yet to introduce the legislation or regulations to implement them, while the bulk of planned spending won't come for another year or two.

In a fall report, federal Environmental Commissioner Julie Gelfand said the government must speed up the implementation of its plan.

Conservative Party MP Ed Fast argues the Liberals are piling on climate-related costs, including carbon taxes, at the risk of the country's industrial competitiveness. He said Canada cannot get too far out of line with its major trading partners such as the United States, particularly at a time when Mr. Trump is pursuing a pro-business agenda.

The Trudeau government achieved a major victory just a year into its mandate by securing provincial and territorial agreement on the Pan-Canadian Framework on climate change, which commits all governments to undertake a broad range of policies – including carbon pricing – to bring down emissions.

"I'm seeing the pace slow down, while push-back from provinces and industry is threatening ambition," Catherine Abreu, executive director of the Climate Action Network Canada, said in an e-mail from Bonn.

Ms. McKenna insisted her government is not slackening the pace but taking a reasonable time to consult with industry and environmental experts on legislation and regulations, while working with provinces and territories on priorities for spending that will have the greatest impact on emissions.

"We are absolutely on track to meet our 2030 commitments," she said. "We have a plan … and there's a whole variety of measures we need to be taking. We also aren't doing this alone; we're working with provinces and territories."

She pointed to federal investment in transit, including up to $1-billion over several years for Ottawa's light rail transit system, a project which she said would result in the largest GHG reduction in the city's history.

Carbon pricing legislation will be introduced early in the new year and will require all provinces to meet a minimum federal standard or see Ottawa implement its own carbon tax in their jurisdiction. The federal plan to reduce methane emissions in the oil and gas industry is due to be released soon, even as Alberta is expected to release its own draft regulations in the coming days.

Environmental economist Dave Sawyer calculates that Canada will fall short of its 2030 target even if all policies announced to date are implemented and Ontario and Quebec meet their own ambitious 2030 goals. He projects Canada's emissions in 2030 will be 29-megatonnes over the 524-MT target unless carbon prices rise substantially after hitting the $50-a-tonne mark set for 2022.

Much depends on the provinces. The Liberals benefited from a favourable alignment of provincial governments when it struck the Pan-Canadian Framework in 2015. With the Liberals in Ontario and the NDP in Alberta facing daunting re-election bids in the next two years, that could change dramatically.

"The real danger is what happens in Ontario and Alberta," said David Runnalls, a senior fellow at the Smart Prosperity Institute based at the University of Ottawa. "If we get governments diametrically opposed to aggressive policy policy, it may not matter much what the feds do." 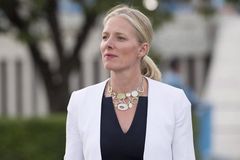 Teck Resources warns on coal, stock falls 8.4 per cent
October 26, 2017
Follow Shawn McCarthy on Twitter @smccarthy55
Report an error Editorial code of conduct
Due to technical reasons, we have temporarily removed commenting from our articles. We hope to have this fixed soon. Thank you for your patience. If you are looking to give feedback on our new site, please send it along to feedback@globeandmail.com. If you want to write a letter to the editor, please forward to letters@globeandmail.com.
Comments