Two men have been charged in connection with the Rehtaeh Parsons case, four months after the Nova Scotia teenager's family had complained that she killed herself after she was gang-raped and a cellphone photo of the alleged assault was circulated among her school peers.

RCMP Chief Superintendent Roland Wells said that both men are being released on the promise to appear in court on Aug. 15. The names of the accused are not being released as they were young offenders at the time of the incident, he added.

"We hope that today's arrests help the entire community to heal. A young girl has died in what is a tragic set of circumstances," he said. "We all need to reflect on how we as a community can come together in Rehtaeh's memory and see what we can do to work together to support our youth."

For months, the case had divided residents of Cole Harbour and Eastern Passages, two neighbouring suburbs of Halifax. Rehtaeh's family and friends complained that her plight hadn't been taken seriously. Supporters of her alleged assailants, whose identities were known through the community, complained that they were unfairly vilified. At one point, posters defending her alleged assailants were nailed on utility poles in their neighbourhood.

Rehtaeh's family could not be immediately reached for comment after the announcement that charges had been laid. On a memorial web page dedicated to her daughter's memory, Rehataeh's mother, Leah, wrote earlier in the day:  "All I can say is that it's about time they were arrested and it's now their chance to tell `Their side of the story'".

"They complain that its all one sided go ahead and speak, we are all ears!"

Ms. Parsons was notified of the arrests about 10 minutes after they took place and was given the names of the suspects, she told CBC.

Speaking in Saint John where he was touring the Irving Oil refinery earlier on Thursday, Prime Minister Stephen Harper said he hoped the arrests will provide some comfort to Rehtaeh's family.

"I just want to say how pleased we are to see that progress is being made," Mr. Harper said.

Coincidentally, the arrests came a day after the province implemented stricter cyberbullying legislation, which gives victims the ability to sue their tormentors.

The legislation stemmed in part from the public outrage sparked by Rehtaeh's case.

A 17-year-old girl from Cole Harbour, N.S., Rehtaeh died in hospital in April after a suicide attempt.

Her family says she was raped in November, 2011, when she was 15, by four boys during a party at a friend's home in the Halifax suburb of Eastern Passage. She was distressed because a cellphone photo of the assault was circulated and the authorities failed to stop the harassment and prosecute the boys, the family alleges.

Her relatives said they were initially told by police that detectives could not prove who had sent the photo and that the Crown didn't think they could clinch a prosecution.

However, a week after her death unleashed a nationwide uproar, police in Halifax say they had reopened their investigation because someone stepped forward and gave "new and credible information."

In a Facebook post Wednesday marking the four-month mark since her daughter's death, Ms. Parsons revealed that she had been raped in similar circumstances when she was 14 and that she had told her daughter about it and cautioned her about situations where there are more boys than girls.

"When Rehtaeh told me what happened to her that November 2011 night, I was immediately transcended right back to my own horror," she wrote.

She added: "Why me? why my daughter? Not that it should happen to anyone but Why?" 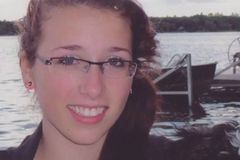 Follow Tu Thanh Ha and Daniel Bitonti on Twitter @TuThanhHa @danbitonti
Report an error Editorial code of conduct
Due to technical reasons, we have temporarily removed commenting from our articles. We hope to have this fixed soon. Thank you for your patience. If you are looking to give feedback on our new site, please send it along to feedback@globeandmail.com. If you want to write a letter to the editor, please forward to letters@globeandmail.com.
Comments are closed