Canadian universities are dropping in the world's most watched international university rankings, raising questions about the country's goals in funding postsecondary education, said the editor of the rankings.

All the universities that had made the top 200 in the Times Higher Education World University Rankings last year, with the exception of the University of Toronto, moved down the table. The results are surprising, given how much Canada spends on higher education, and raise questions about the structure of that funding, said Phil Baty, the editor of the rankings. Spending per student in college or university in Canada is one of the highest in the OECD and countries that invest heavily in higher education tend to rank high in the tables, Mr. Baty said.

"The drop is really quite a surprise to see. It's not a dramatic fall but a very consistent slip … is there too much of an egalitarian system? That sounds perverse, but is there a sense that the universities are being funded too equally, that there needs to be greater protection for the smaller group at the top?"

Germany, for example, has the Excellence Initiative, which funds research at internationally competitive institutions. Japan is giving extra research funding to 22 of its universities with the explicit goal of winning representation in the top 10 on the rankings tables.

Canada has similar initiatives like the Canada Excellence Research Chair program, launched six years ago and aimed at recruiting top faculty. and the Canada First Research Excellence Fund announced in this year's budget. It will give institutions $1.5-billion over a decade.

THE GLOBE AND MAIL » SOURCE: the world university rankings

While Canada spends almost $24,000 a student, putting us second only to the Unites States, that money is tied to student enrollment and must serve undergraduates as well as graduates and faculty salaries. Some provinces, like Alberta and B.C. differentiate universities according to the intensity of their research and Ontario has begun a process to recognize the strengths of each institution.

"We have not seen any additional investments in quite a number of years now and also we have to live within quite a lot of constraints," said Suzanne Fortier, principal of McGill University. Money is not enough, if Canadian universities do not have control over how to spend it. "We don't have agility, we don't have a lot of flexibility, because, certainly in the case of McGill, all of our money is controlled by the government," she said.

She pointed to the 18 months that it can take to receive approval for a Canada Excellence Research Chair as an example. "If you are trying to recruit one of top persons in the world, and we say 'We really, really want you and we will put your name forward and in a year and a half from now we will tell you if we are able to recruit you or not,' that person has had many offers in that time," Dr. Fortier said.

Universities are talking to the federal government about how the new research superfund could turn on the financial taps faster, she added.

Many schools only made minor movements in the tables. The University of British Columbia moved down one spot, McMaster in Hamilton, two. The rankings are based on indicators in several areas, including teaching, research impact, industry income and international outlook. In many categories, reputation will also be considered. The measures are given different weights, with article citations being the single most important factor.

Most Canadian schools – with the exception of the Université de Montréal and McMaster – had relatively low scores in the industry category, which measures the ratio of a university's income from industry to the number of faculty. Small increases in that area could yield better scores overall, Mr. Baty said.

With drops in the enrollment of domestic students and universities looking to international students to fill some of the resulting loss of funds, the rankings matter more than ever. The University of British Columbia, which had the highest score in the international category, has found that its name recognition helps it recruit overseas.

"Every parent in China knows exactly where UBC is in the rankings and will quote me more numbers than I know," said John Hepburn, vice-president of research and international at the university, who travels to recruitment fairs.

Making decisions on which university to attend based on global rankings makes sense, said Mr. Baty. "Internationally mobile students are making a very large investment. The name on the certificate will be such a huge part of their lives, it's a lifelong passport."

Drops of a few places in one year do not have an immediate effect on these students' perception of the worth of a particular university degree, but recruitment is impacted if students can look back over time and see a downward trajectory.

The top 10 have been stable for years, with the California Institute of Technology in top place for the fourth year. Overall, the United States also had a poor showing this year. American universities took three quarters of the spots in the top 20, but 60 per cent of U.S. institutions lost ground. Mr. Baty said the declines came primarily at publicly-funded schools which have faced budget cuts of as much as 20 to 30 per cent.

At Canada's lone top 20 entry, the University of Toronto's president, Meric Gertler, said the ranking has been a "huge asset" in attracting faculty and students and in keeping top-ranked professors. He added, however, that the reputation of every university in the country would suffer if movement were to continue downward. "We want to make sure that a cluster of excellent institutions can continue to excel. I think it's important for Canada's national brand."

THE GLOBE AND MAIL » SOURCE: the world university rankings 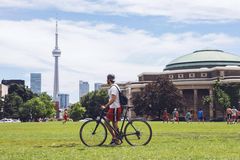 We have to measure literacy and numeracy among university graduates
September 12, 2014 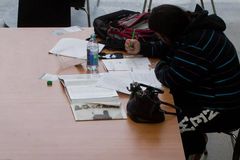 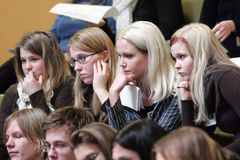