Luis Fondebrider lives among the dead and the vanished. A forensic anthropologist, he grew up in Argentina under the shadow of military rule and its Dirty War, in which thousands of people were killed during state-sponsored violence.

Victims, called desaparecidos or the disappeared ones, were buried in mass graves, or their bodies thrown into the ocean to wash up on the beaches of Argentina and Uruguay.

Today, Mr. Fondebrider works with the group he founded more than three decades ago: the Argentine Forensic Anthropology Team, also known by its Spanish acronym, EAAF. The non-governmental organization is a team of about 60 people who apply a multidisciplinary forensic method to aid with finding and identifying bodies – some long dead.

The scientific approaches Mr. Fondebrider pioneered have now been used in post-conflict zones around the world, such as Bosnia, Libya and Angola. In recent years, he and his team have applied them to another type of massacre: feminicidio or femicide, the targeted murder of women specifically because they are female, which has reached epidemic levels in places like Mexico's notorious city of Ciudad Juarez and among aboriginal women in Canada.

Mr. Fondebrider is in Canada this week as a consultant on The Globe and Mail's Missing and Murdered Indigenous Women project.

How has your experience with the disappeared people in Argentina lead you in the work you do around the world?

Well, we're still working in Argentina, where we request justice for families in Argentina. We investigate what happened with the people that disappeared. We exhume bodies from cemeteries and clandestine centres. We try to identify the remains. And I will keep working in that area. Not only to keep the remains ready to identify to the families, but also to provide scientific evidence on the trials that are going on in Argentina for the last years. Our evidence is used by the courts in the investigation and the prosecution of those responsible for the killings.

Have you run into any political or social resistance in Argentina?

The problem, as in many countries, is the difficulty in finding the remains, because the perpetrators around the world, they do not provide information about the whereabouts of the missing people. In the last 10 years, since 2004, the new government of Argentine President Cristina Fernandez de Kirchner created a policy where human rights was topping the agenda, so we receive a lot of support, which allows us to reach more people, to have more investigations and to present more results to the families.

Have you noticed any similarities in attitudes toward femicide victims in Mexico and Canada?

What happened in Ciudad Juarez showed to the world that in many countries, women for different reasons have been targeted – have been kidnapped, raped and killed. Very often, this is not due to political reasons, it's due to the condition of women. And in the case of Canada, one of the many challenges is for the authorities, I guess, to define if it is a criminal case or femicide. People are saying, it's a different kind of problem, we need some different kind of approach.

Because when a specific group of people, because of religion, cultural aspect, gender – in this case, women – is being attacked, it's needed to have a different approach to the investigation, not only in order to give answers to the families and to find the missing women, but also to try to stop this from continuing to happen and to get the perpetrators. That's why it's so important to establish patterns in this context, independently of what happened inside houses and family violence. Usually problems are more complex when a group is suffering these kinds of events, like the kidnappings or disappearances.

There are enough cases around the world – in my own country – where women have been kidnapped and used as slaves, sexual slaves, prostitutes. Women disappear for different reasons. So, more and more, authorities around the world need specific protocols about how to investigate femicides. Unfortunately it's a term that is used around the world now, and they need a different approach.

What kind of approach do you recommend?

Well, the approach is a multidisciplinary one, which is not only a police operation, or a forensic operation. It's needed to involve other specialists who can have a comprehensive view about what's happening – people coming from social anthropology, history, media – to try to collect data, to try to understand why this happened, to put together all the data. This is particularly difficult when it's happening in big countries, with big spaces, when some areas are very isolated – and maybe this happens without being noticed by the society. That's why these kinds of cases need a multidisciplinary approach. The police are a key element in this process, but not alone; they have to work with other specialists.

Very often, in many societies, what are called marginal groups – homosexuals, women – are affected by different kinds of violence. That's why the most important thing is to realize this isn't a problem of these groups, it's a problem of society. All of society is involved, and all of society has to be aware of these situations. One of the worst attitudes about this is to think, this will not happen to me, this will happen to other people who are different from me. And a society cannot be built under those premises. A society has to be in the interest of solidarity, and to understand every member of society is important. There's no first-class and second-class citizens.

Report links residential schools with missing and murdered women
May 15, 2018

Life full of promise vanishes without a trace
May 15, 2018 70 per cent of murdered aboriginal women killed by indigenous men: RCMP
May 14, 2018 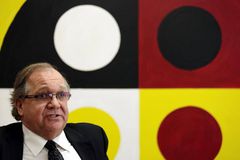