For those who know Tim Hudak beyond his overly scripted public persona, as decent and personable and if anything a little too eager to please, it was hard not to feel badly for him on Thursday night.

Mr. Hudak undoubtedly woke up that morning believing he had a good chance of becoming premier, and confident he had run a good race. He went to sleep, if he was able to sleep at all, aware that his second and final campaign at his party's helm had been even more of a disaster than his first.

As much as many of them like him personally, though, his fellow Progressive Conservatives may not be feeling a great deal of warmth toward him at the moment. Because the strategy he undertook in this campaign not only failed to win them power for the fourth straight election, but left them with an enormous mess to clean up.

Mr. Hudak's attempt to navigate his way to the Premier's office involved writing off most of the electorate. Recognizing that their party's appeal had narrowed since it last won government in the 1990s, he and his strategists didn't try to broaden it. Instead, they tried to ensure that the roughly one-third of the population inclined to support them would be more motivated to vote than everyone else.

So the Tories ran a campaign that was almost entirely about preaching to the choir. Their platform, which among other things promised to cut 100,000 jobs in the broader public sector and slash corporate taxes by 30 per cent, was all about mobilizing the base. Their candidates were instructed to skip over doors that didn't belong to likely supporters they needed to mobilize or the small number of undecided voters their modeling told them might easily be won over. Their leader went out day after day and delivered the same talking points, aimed only at people who saw the government's failings exactly as he did.

This approach was premised on the Tories' confidence that most Ontarians disinclined to vote for them would simply stay home. They overlooked or underestimated that their platform might encourage their opponents' supporters to come out, and that other parties might also have sophisticated ways of identifying and getting out their vote, and that a persuasion campaign attempted by someone with the likeability of Kathleen Wynne might actually work.

If only his assumptions had been proven right, even just enough to win a slim minority government, Mr. Hudak might have been able to gain the acceptance of more Ontarians once he was in the Premier's office, much the way Stephen Harper ultimately achieved federally. The danger was that if they proved wrong, he would wind up having narrowed his party's appeal even further.

Almost nobody predicted just how wrong the assumptions would be. Turnout in this election was up significantly over the last one – just not, apparently, among Progressive Conservatives. At 31.2 per cent, the Tories' share of the popular vote was their lowest since they came third in 1990; the only recent election in which they received a comparable percentage was in the 2007 election, when their 31.6 per cent was considered an anomaly because of then-leader John Tory's ill-fated pledge to expand religious-school funding.

Meanwhile, the Tories lost the foothold they spent a decade trying to get in Toronto, with Doug Holyday being defeated less than a year after he won a by-election there. In fact, they lost nearly every seat they had anywhere near Toronto, including long-held strongholds where the base just didn't count for as much as they thought. This election, with all its promise for them up until election day, turned into a retreat into rural Ontario – especially unhelpful since it's likely that before the next campaign, new riding boundaries will make that part of the province count for less.

Mr. Hudak's pitch in this campaign, in fairness, wasn't just some cynical ploy. He appeared much happier running from further right than he did in the previous election, because it was truer to what he believed in.

Hopefully that will allow him to hold his head high, once he has recovered from the shock of where it got him. But it doesn't make those results any less a repudiation of his attempt to speak to only a relatively few Ontarians, nor will it make the rebuilding project for whoever replaces him any less daunting. 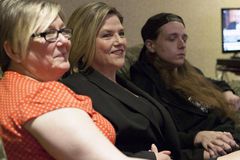