The Quebec government is changing course on a controversial policy and will now allow parents to accompany their sick children on emergency air evacuations.

Health Minister Gaetan Barrette says at least one parent will be permitted to join their children on future air ambulance flights.

The change comes in the wake of a letter a trio of Montreal physicians sent the Quebec government in December calling for a change to the longstanding policy of transporting kids alone.

They urged the Health Department to act, saying the policy disproportionately affected northern Inuit and First Nations communities and that transporting the children alone from remote communities led to issues in providing them with treatment in southern Quebec.

Quebec was believed to be the only province that refused to allow parents or guardians to accompany their children on emergency flights.

"I'm announcing that we're harmonizing our rules with those that exist elsewhere in Canada," Barrette told reporters at a hangar in Quebec City on Thursday.

"Once the alterations are done – there will be some changes – one parent will be able to accompany one child – their child."

Barrette added the pilot, like elsewhere in Canada, will have the final say on whether the parent or relative can be brought on board. If there's a risk involved, the pilot will be allowed to say no.

The province previously said the policy was due to a lack of space because of equipment on board the planes.

Instead, the province footed the bill to have families flown on commercial flights to their children's bedsides.

Barrette explained that two of the airplanes have the necessary space for a parent, while the third, older model would need to be retrofitted and removed from service for a year. Such a change requires federal government approval, he said.

One of the doctors who spoke out, Samir Shaheen-Hussain, welcomed Barrette's announcement as a "step in the right direction" but added it should have been made a long time ago.

"There is certainly some bittersweetness to this apparent victory given that too many kids were transferred unaccompanied over the years," he said.

"The immediate implementation of a family-friendly policy is long overdue, but nothing can undo the traumatic experiences of all those kids who have been unaccompanied all these years. And that is a legacy that the provincial government needs to be held accountable for."

Stakeholders from various Indigenous communities and groups spoke out about the issue as did both the Canadian and Quebec pediatric societies. 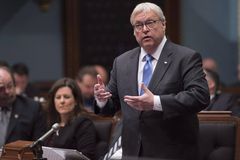