A lot of people in Calgary are suddenly rediscovering their neighbours and meeting ones they never knew they had. At least some of them live in Inglewood.

It's an old, inner-city area of Calgary that took some damage in the city's flooding disaster, and it's also been where I've lived since the 1980s.

Best of all, it's where people like David and Kathee Todtman and Jean Mogensen and her husband Marc Langlois live too, and lots of others who have decided to help those whose houses became waterlogged as the Bow River rose and storm sewers became overtaxed. Just a few days in, it is pretty clear that their spirit will carry this neighbourhood and city through some tough times to come.

It was the neighbourhood I took for granted, the place where I had stopped seeking out new people to get to know, the area that surrounded my house as I complained that human nature had become more selfish and more obsessed with things such as real estate prices. Now, Inglewood's forced a rethink.

Several basements on my street were damaged when a murky, smelly water-like substance came up from floor drains some time between Friday night and Saturday morning, while owners were evacuated. Our houses were not write-offs. We were nowhere near hardest hit in the city, or even Inglewood itself, a huge tract of which broke off in big pieces and fell into the rushing current of the Bow, leaving several homes vulnerable to following suit.

Many people in other neighbourhoods, such as Elbow Park, just southwest of downtown, or Bowness, in the western part of the city, took the first looks at their houses from boats after the rivers crested. Others could only watch images of brown water overtaking their communities on televisions owned by the friends and relatives who took them in after they were ordered out of their own places on Thursday.

My reattachment with Inglewood has come in stages. The first moments came on Saturday after some of us from the street, managing to navigate around countless closed roads and bridges, trickled back and began a hunt for pumps and generators. By that evening, they were being passed around from neighbour to neighbour like good books. When one basement was emptied, the gear moved on to the next.

A couple of days later, I met David and Jean for the first time as I got out of my car, grumpy about the amount of work ahead. They know each other as neighbours about a block away. David said he was looking to help people with whatever they needed. He had tools. He only had to run home and get them. I hesitated, being the thanks-but-I've-got-this type. He was insistent. I relented. That turned out to be good.

David, a retired psychologist, proved incredibly skilled at cutting out drenched drywall. Jean, who is starting a new career as a Yoga instructor, put her head down, gathered up the debris and hauled it out to the curb. Before long, she was joined by Kathee. Marc appeared a little later, grabbed a utility knife and began cutting. This was dirty work, and was made tougher by the dim light of the basement, musty smell and the constant drone of gas-powered generators and a new scourge that has come as the waters receded – mosquitoes.

Inglewood helped on those scores, though. On that day, local businesses provided food, coffee and water, either in parking lots, or from cars and vans patrolling for people who looked hungry. The community association martialed a small army of volunteers, both to help clean up houses and to give residents such necessities as work gloves, flashlights and bug spray.

Our situation – and that amazing spirit of volunteerism – is echoed across town. Calgarians have showed unflappable enthusiasm for helping, as shown by the thousands who gathered at McMahon Stadium on Monday, egged on by Mayor Naheed Nenshi, to be bussed to hard-hit areas so they could pitch in with the gigantic task of pumping out, mopping up and rebuilding.

For me, my wife and son, our saviours were our friends Andy and Carole Taylor and their daughter Audrey – former Inglewood denizens who had moved to higher ground a few years back. They took us in without hesitation and helped us tug soggy furniture, books, photos and other things we had long vowed to organize, but never did, out of our basement. A connection through their daughter-in-law led us to a generator. With power not restored to our street, we're still imposing on them.

By the end of that first day, a street that had been so dark, rainy and deserted when the river rose was alive and hopping, because people wanted assist their neighbours – even if they hadn't met yet. That happens in Inglewood. 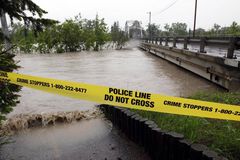 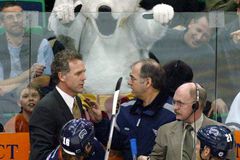 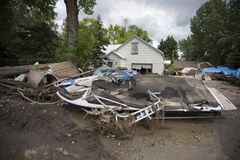 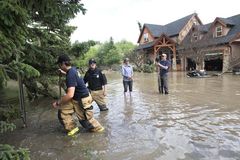 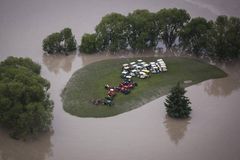