Several top polar bear scientists are considering what might once have seemed unthinkable: Please feed the bears.

As sea ice disappears and habitat deteriorates in some polar bear ranges, a newly published paper by 12 of the world's foremost experts suggests it's time to consider how to manage increasingly troubled populations.

One idea? Setting out big piles of polar bear chow on the tundra.

"We just raise it as one of the options," said co-author Andrew Derocher of the University of Alberta.

The study points to the bears around Hudson Bay, one of the most southerly populations and perhaps the most vulnerable to the loss of sea ice, which the animals use as a hunting platform.

A recent government of Nunavut aerial survey suggested bear numbers around the bay are stable, but other studies disagree. They suggest the bears' condition is deteriorating and they aren't producing anywhere near enough cubs. That makes them highly vulnerable to one bad year, says Dr. Derocher's report.

"Annual variability in sea ice makes it increasingly likely that we will soon see a year where sea ice availability for some polar bear populations is below thresholds for vital rates. Malnutrition at previously unobserved scales may result in catastrophic population declines."

How will wildlife managers – and the public – respond to images of dozens of dying polar bears in a world where Russian icebreakers detour to save whales? Dr. Derocher asks.

"A stranded sea lion ends up in a recovery facility, fed back up and put back out," he said. "What is it about the Arctic? Is it just too far away for people to care? I don't think so."

The authors suggest tough decisions will have to be made as marginal polar bear ranges decline.

Feeding the bears is only one possible response. Bears could be relocated, temporarily housed until sea ice recovers or culled to bring numbers down to what the environment can support.

"It's going to be extremely messy as these populations move toward local extinction," Dr. Derocher said. "I think there's an expectation from the public that we've done all this research, [so] are we going to be prepared when something happens?"

The report has provoked a blizzard of controversy in Nunavut, where the idea of feeding polar bears or interfering with them in any way goes deeply against the Inuit grain.

"The hunters are talking," said Environment Department deputy minister David Akeeagok. "It's disbelief that the wildlife we're accustomed to would be proposed to be fed."

Mr. Akeeagok said the first response to a catastrophic year would be to end a 24-bear hunting quota in the western Hudson Bay area. The next, he said, would be to let nature take its course.

"It's not a great sight to see, but it corrects itself," he said.

Mr. Akeeagok believes there's little chance of such a wildlife disaster happening any time soon. Bears are adaptable, he said, and there's enough terrain in Nunavut for bears to find a niche to survive. The falling cub count is disturbing, he conceded.

"There's definitely something happening. It could be a natural cycle; it could be sea ice. To say there's no cubs and they're in danger is premature."

Feeding wild animals is not unprecedented.

Wildlife managers in central Europe put out food for wild bears. In California, carcasses are set out for condors. 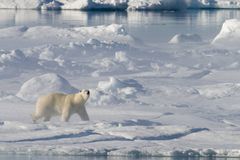 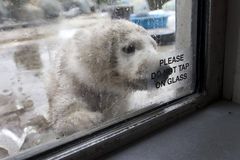