Ontario Superior Court Judge Ian Nordheimer presided over the second-degree murder trial of Nicole Kish, charged in a case that a few years ago became known in Toronto as the panhandling murder because it was born in an encounter common to the downtown streets of any big city - an approach from a panhandler, in this instance Ms. Kish, for $20.

Minutes into Aug. 9, that very ordinary encounter morphed into something much worse, with a 32-year-old man named Ross Hammond lying on the Queen Street West sidewalk, bleeding internally from four stab wounds to the chest.

A web marketer who worked in Toronto but lived in St. Catharines, Mr. Hammond died two days later in hospital.

His sin was to blow Ms. Kish off with an obscenity, and he paid for it with his life.

It was an irritatingly complicated case - some missing evidence; almost 20 eyewitnesses to the clash if not to the actual murder, and this at a time when eyewitness testimony is unloved by the courts; a victim who played his part in the piece and an accused who had youth, even if arguably misspent, going for her.

It was, at the request of Ms. Kish's lawyers and with the required consent of the Crown, a judge-alone trial.

Near the end, Ms. Kish, now 24, saw the way the big ship Nordheimer was turning, and began weeping, shaking her head, and writing furiously.

The judge finished, pronounced her guilty and ordered her into custody pending her sentencing on April 4. Life in prison is mandatory in murder cases, but to be fixed is the time she must spend behind bars before being eligible for parole. The mandatory minimum is 10 years.

As she was being led away, she turned and faced her mother and friends in the gallery, and, mouth open in anguish, howled, "How did this happen?"

Ms. Kish seemed gobsmacked, perhaps because so were her lawyers, John Scarfe and Venora Simpson, who said outside court, "Ms. Kish, her family and her lawyers are extremely shocked and disappointed at today's result," and swiftly promised an appeal.

It seemed clear that the lawyers, at least, had not anticipated that this judge had dollops of the same common sense so often praised in jurors and backbone enough to resist the current anti-eyewitness tides.

Those eyewitness accounts, which seemed at first glance to be all over the map, Judge Nordheimer sorted out by studying what each one said and weighing it.

The differences among them, mostly inconsequential, he noted were of the kind that usually indicate a witness isn't gilding the lily but rather being honest about his uncertainty.

And on the main points - who at one point had the knife in her mouth; who ended up with a gash on her own arm with no other explanation as to how that happened but the obvious - a preponderance of witnesses agreed: Ms. Kish.

"I am well aware of the frailties that come with eyewitness identification," the judge said. "We caution jurors very strongly about these frailties and the need to take special caution approaching such evidence."

But, he said, the risks "cannot at the same time paralyze" judges and jurors.

"In other words," he said, "we must not become so fearful of the problems associated with the eyewitnesses that we effectively abandon that evidence or refuse to act on it."

He handled the matter of the lost evidence - store surveillance video that was improperly copied by the first officers in charge of the case, one VHS tape - with similar sure-footedness.

The VHS tape, he found, had only possibly relevant evidence, and was lost due to human error, regrettable, but not negligence. The surveillance video, however, was clearly relevant, and it was lost when other detectives didn't look at it - thus failing to discover it hadn't been copied properly - in time to rectify the mistake. It amounted to a breach of the Crown disclosure obligation and violated Ms. Kish's rights.

But it wasn't a serious enough breach - there was no evidence the video contained revelations or even whom it might have helped - and it didn't warrant a stay of proceedings, as the defence had sought.

This was, in the panoply of modern cases, a rare bird, in that, as Judge Nordheimer said, "in contrast to many other criminal cases that we see these days, in this case all of these citizens came forward, co-operated with the police regarding what they had seen and then gave evidence at this trial.

"They are deserving of our appreciation and thanks for doing so."

Among them were cab drivers, restaurant employees, a couple on a streetcar, a cyclist, a new mom who lived nearby, a motorist. They called 911, stuck around, even attended to Ms. Kish's wound, did the right things.

Judge Nordheimer thanked them the best way he could, by not flinching from his own difficult job.

Afterwards, outside the courthouse, Bruce Hammond, the slain man's dad, his face a study of misery, said "We're all happy," by which he meant they were as happy as people whose kid and brother is dead could be.

Even on its best days, that's as good as any justice system gets. 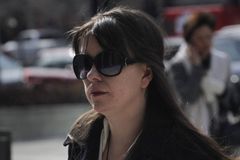 Suspect in stabbing death is back behind bars for alleged assault
October 12, 2007
Panhandler granted bail
September 5, 2007
Follow us on Twitter @globeandmail Opens in a new window
Report an error Editorial code of conduct
Due to technical reasons, we have temporarily removed commenting from our articles. We hope to have this fixed soon. Thank you for your patience. If you are looking to give feedback on our new site, please send it along to feedback@globeandmail.com. If you want to write a letter to the editor, please forward to letters@globeandmail.com.
Comments