Ontario's Liberal government is trying to speed the privatization of Hydro One through the legislature, capping debate on the sell-off and using an unusual procedural tactic to stop the opposition from prolonging discussion.

Premier Kathleen Wynne used her majority in the assembly Wednesday to pass a time-allocation motion on the omnibus budget bill that authorizes the Hydro One privatization. The motion sets out how much time a committee will have to study the bill – six days – before referring it back to the legislature for final approval. The government's goal is to pass the bill before summer break on June 4.

On Tuesday, the NDP tried to stretch out debate on the budget by tabling amendments to the time-allocation motion. The goal was to press the Liberals to agree to more committee hearings on the Hydro One sell-off, including some outside of Toronto.

The Liberals thwarted this tactic using a technique called "ringing the bells": They suddenly moved to adjourn the legislature and proceedings ground to a halt while the legislature's bells were rung for 30 minutes to signal a vote on adjournment. The Liberals voted not to adjourn, then immediately moved to adjourn again, setting off another 30 minutes of bell-ringing. The hour wasted in this way erased all the time the NDP had on the clock to bring amendments to the time-allocation motion.

Opposition MPPs banged their desks and exchanged heated words with the Liberals across the aisle. Even Ms. Wynne got involved in the heckling.

Finance Minister Charles Sousa said the Hydro One privatization must start quickly so government can use the money from selling it to pay for new transit lines and other infrastructure. He pointed out that the six days of committee hearings are four more than the government allowed on its budget last year.

"This budget is all about redeploying and finding everything necessary to provide greater investment in infrastructure, roads and bridges and public transit," he said. "The opposition will do their play … they're playing silly games to try to defer the ability for us to pass this budget."

The NDP argued that the Hydro One privatization is so substantial it merits its own debate, separate from the one on the budget itself. Leader Andrea Horwath argued that shoehorning the Hydro One sell-off into the budget bill was similar to Prime Minister Stephen Harper's technique of rolling various pieces of unrelated legislation into omnibus bills, which the Liberals' federal cousins have long complained about.

"There is no doubt that the way the Liberals have handled both this budget and the process is right out of the Stephen Harper playbook," she said. "Kathleen Wynne should not be ramming it through the legislature."

Progressive Conservative parliamentary leader Jim Wilson said the Liberals "are feeling the heat from the public" over the Hydro One sale – some polls suggest a majority of Ontarians would prefer the Crown be kept in public hands – hence their desire to get it done quickly. He contended that relying on one-time asset sales to raise money is not a prudent policy.

"They're burning the furniture to heat the house and soon they're going to run out of furniture," he said.

As the debate raged inside, a few hundred protesters gathered on the lawn of the legislature Wednesday to demonstrate against high electricity prices.

Retiree Mary Richter said she spends more than $5,000 per year to keep the electricity running at her acreage in Prince Edward County, which takes a large bite out of her $18,000 pension.

"I've even thought of leaving the country," she said.

Ontario Speaker rules Liberals not in contempt for Hydro One offer
May 15, 2018 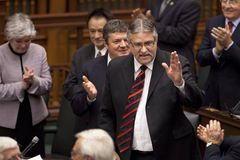 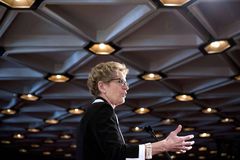 Ontario to give power workers shares in privatized Hydro One
May 15, 2018 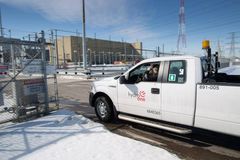