Manitoba premier-designate Brian Pallister ruled out a commitment to gender parity in his first cabinet only hours after his Progressive Conservative Party won a commanding majority in the province, ending nearly 17 years of NDP rule.

Manitoba's Tories won 40 seats on Tuesday, nearly doubling the size of the party's caucus. With 16 incumbents to choose from, only two of the veterans are women. Mr. Pallister said that what will matter most for him is not gender but merit.

"As the father of two daughters I believe they should have equal opportunity in life, but they should also understand that merit is what matters most," he said on Wednesday, speaking on the grounds of the provincial legislature in Winnipeg.

Gender parity is a worthy goal, he said, but it'll take time. While the Tories ran the largest number of women in the party's history this past campaign, the party's new caucus has fewer women, visible minorities and First Nations than the smaller NDP government it replaces. Eight of the party's 40 MLAs are women.

Mr. Pallister would not commit to putting his two veteran female MLAs into cabinet. He says he'll appoint a cabinet within three weeks. During the campaign, Mr. Pallister had pledged to keep his cabinet down to a dozen ministers. Speaking soon after his victory, he told reporters that it would be unfair to push someone with little political experience into a senior cabinet role.

"I don't think that it would be fair to put people who are brand new, necessarily too rapidly into really extremely demanding roles in cabinet," he said.

Prime Minister Justin Trudeau made international headlines last November when he appointed Canada's first gender-balanced cabinet, with 15 men and 15 women. When asked outside of Rideau Hall why gender parity was important to him, Mr. Trudeau said, "because it's 2015."

Alberta Premier Rachel Notley took office last spring with only four legislators that had any experience in provincial government – she was the only female incumbent. Five of her 11 ministers were women: the energy, health, justice, environment and labour ministers.

Mr. Pallister has made statements in the past that have troubled some communities in his province. As a Conservative MP, he spoke at length against same-sex marriage. In March, 2005, he told the House of Commons that social activist Nellie McClung "would have abhorred the thought that the price for attaining equal suffrage was the loss of her distinct status as a woman."

The premier-designate has since changed his position, telling reporters that he would not be averse to walking in Winnipeg's Pride parade.

As Stephen Harper's Indian affairs critic, he warned about "power-hungry chiefs" and waste on reserves. His choice of language was criticized by First Nations. In 2013, he recorded a Christmas greeting that he extended to "infidel atheists."

On Wednesday, Mr. Pallister extended a hand to those who might still be troubled by some of his past comments.

"If I've offended anyone in the past I would ask for their forgiveness and ask for their support and encouragement now," he said. "I'm a loving person and I love Manitobans equally."

While the incoming premier has said he will adopt a moderate style of government, one of Mr. Pallister's former opponents in Ottawa says that won't happen. Pat Martin, the former New Democrat MP for Winnipeg Centre, says he remembers a hard-driving parliamentarian who was at the most conservative edge of Mr. Harper's party.

"He's the last of a dying breed of hard-nosed neoconservatives that we thought had gasped their last breath," Mr. Martin said.

Mr. Pallister admitted to breaking a promise on Wednesday. In his victory address only hours earlier, he had told Manitobans that they would walk out the next morning into a province under a Tory blue sky. It was grey and overcast. 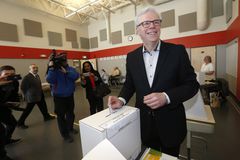 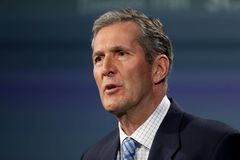