Worried that asylum seekers enduring sub-zero temperatures to find sanctuary in Canada could die on their journey, Manitoba Premier Brian Pallister is urging Prime Minister Justin Trudeau to have a stern chat with U.S. President Donald Trump about the net effect of his immigration policies.

Mr. Pallister said the new U.S. administration needs to understand that what it is doing is a radical departure from its history and tradition and a gross violation of the very terms inscribed on the country's most visible symbol of freedom – the Statue of Liberty.

"Take it up with them," Mr. Pallister told The Globe and Mail in an interview in his office. "Tell them they're scaring the shit out of people and they're going to keep coming up here in record numbers if you don't reach out and understand the history of your own country."

Related: The Globe follows 22 asylum seekers who crossed the American border into Canada

More than 200 asylum seekers from the United States have landed in Manitoba since the beginning of the year.

Earlier, Mr. Pallister got choked up talking about the plight of those making the frigid journey through the wilds of Minnesota to the Canadian border in Manitoba, with many crossing at Emerson. The Premier said the region last week experienced one of the worst blizzards of the year, with winds reaching 100 kilometres an hour. Eventually, there could be a spring runoff that could produce dangerous flood conditions for crossers.

"People are coming here in knock-off parkas that don't provide near adequate warmth," he said. "There are two-year-olds being carried through snowstorms. It's a miracle no one has died or lost limbs to amputation in the last couple of weeks."

Mr. Pallister has been dogged by controversy over his working vacations in Costa Rica. Last year, he spent 34 days there.

Ottawa has pledged $30,000 to help the town of Emerson deal with the costs associated with handling and processing the arrivals, but there has been little commitment beyond "monitoring" the situation.

This has been the source of enormous frustration for Mr. Pallister, he conceded. He is, however, against suspending the Safe Third Country Agreement, which says any refugee claimants first entering the United States who later attempt to cross into Canada must be returned to the country in which they first arrived. Many believe this pact is what is persuading asylum seekers to avoid staffed border stations and instead risk their lives to enter through remote unprotected areas.

"Labelling the U.S. as unsafe is not a good idea," Mr. Pallister said. "Listen, I'm a trade guy. I don't want to see that border thickened up in retaliation [for] making such a move."

On other matters, the Premier said he is in no hurry to sign a health-funding agreement with Ottawa despite the fact Manitoba is the last province standing among the holdouts that refused to sign an agreement with the federal government originally.

Mr. Pallister said he has never responded well to "threats" or "intimidation tactics" although he was reluctant to describe in detail what he considered they were. He did say there have never been any negotiations with Ottawa around health funding and its divide-and-conquer strategy with the provinces has not been a healthy development for relations among first ministers.

"Who are the losers as these side deals happen? Canadians, not me," the Premier said. "Canadians, now and in the future."

That said, it sounded like Mr. Pallister is resigned to his fate. "We may have lost the battle but not the war," he said. The province is negotiating its own side deal, although clearly it will not resemble anything like what Manitoba is looking for.

For instance, the province wants tens of millions of dollars for indigenous health and then tens of millions more on top of that to deal with the rise in diabetes, particularly among First Nations men and women. The province insists it is owed more than $30-million from the federal government for flight costs it has covered to medivac sick residents on reserves to hospitals – a cost it says Ottawa should be helping pick up.

Nearly all of the agreements the federal Liberals have struck with the other provinces and territories around health-transfer arrangements have included the standard injection of roughly 3 per cent annually in funding; Ottawa is adding an additional $11.5-billion, spread across 10 years, in funding for mental-health care and home care.

Mr. Pallister has also not signed the national climate strategy, telling the Prime Minister that he would not lend his signature to the agreement until he had a deal on health. He said even if he does agree to a health deal soon, he won't immediately sign on to the climate pact – which the province is still looking at.

"We're developing a strategy around that now," he said. "When it comes time to announce something, it won't be on Eastern Standard Time."

On another matter, the Premier remains defiant about his right to take off for up to two months of the year to his tropical getaway in Costa Rica. Mr. Pallister has come under intense fire for spending so much time away from Winnipeg, especially in the winter, when people in the province have to endure bitter cold temperatures.

In the legislature this week, the Opposition tried to bait him several times on the subject, suggesting his "failed policies" were the result of the amount of time he was spending away at his jungle retreat.

"Look, I'm not going to change," he told The Globe. "I'm going to keep my family together – that is the promise I made to my dad."

The Premier said despite the time he may spend away, he will take far less time off than former NDP premiers Greg Selinger and Gary Doer – although he supplied no evidence to back up that claim.

"I'm in here working 40 weekends a year," he said. "I have nothing to apologize for." 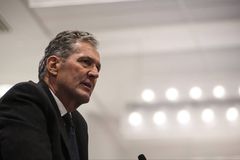 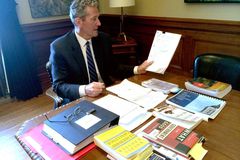 Manitoba Premier Brian Pallister says he's ready to negotiate with Ottawa on health care
March 3, 2017
Follow Gary Mason on Twitter @garymasonglobe
Report an error Editorial code of conduct
Due to technical reasons, we have temporarily removed commenting from our articles. We hope to have this fixed soon. Thank you for your patience. If you are looking to give feedback on our new site, please send it along to feedback@globeandmail.com. If you want to write a letter to the editor, please forward to letters@globeandmail.com.
Comments