When the dirt was scraped away, the letters showed through, carved into the gold signet ring with a flourish: "KDD."

Beneath the Brussels sprouts of the Belgian farm field, there were other clues. A compass whose needle still pointed north. Two combs, a shaving kit, a wallet. The skeleton itself.

In the end, dental records confirmed what the ring suggested: This was Kenneth Donald Duncanson, private in the Canadian Army, reported missing in action on Sept. 17, 1944, while fighting for control of the Leopold Canal. KDD.

Mr. Duncanson is the latest unknown soldier to be identified by the Canadian Forces through a program that has matched dozens of families with relatives long considered lost to foreign battlefields.

The initiative has put a small dent in the roster of 27,000 missing Canadian war dead scattered across Europe and Korea, most of them killed in the two world wars.

Now, 18 months after his remains were discovered, Mr. Duncanson is set for a proper burial in a military cemetery attended by members of his regiment and family.

Judith Thomas, a cousin once removed, will attend the service in Belgium this fall. The amateur genealogist was thrilled to learn that the remains had been found. "Just the most wonderful gift," she called it, from her home in Saskatoon.

The Wallacetown, Ont., native had been missing for more than 70 years when two Belgian hobbyists uncovered his bones during an excursion to find military artifacts near the hamlet of Molentje on Remembrance Day, 2014; old machine-gun magazines set off their metal detectors.

It was obvious to local police that this was not a criminal matter. Much of Belgium and northern France serve as mass, unmarked graves for the dead of the world wars; the remains of soldiers are uncovered routinely.

Because these bones lay beside a smattering of Bren-gun ammunition, a type of weapon used primarily by the British and Canadian armies, the Belgian police contacted the Commonwealth War Graves Commission.

Unlike the U.S. government, which continues to scour the world for missing American soldiers, Commonwealth countries no longer actively search for their war dead. The logistical challenge of exhuming hundreds of thousands of fallen soldiers with unknown resting places would be too great.

"You'd literally have to tear up the French and Belgian countryside," said Major Ivan Dellaire, a heritage officer with the Canadian Forces.

The Department of National Defence (DND) estimates that Canada alone has about 27,000 missing military casualties: 19,000 from the First World War, 8,000 from the Second, and a little over a dozen in Korea. Since launching in 2006, the Casualty Identification Program has put a name to the remains of 22 Canadian and 17 British service members.

The DND sent a forensic archeologist to investigate the Molentje remains in March, 2015. His report suggested there was more skeleton to be recovered and that a proper excavation was worthwhile.

After a delay of many months – the farmer whose field contained Mr. Duncanson's bones had to plant his winter crop – DND sent over a team to investigate in April, comprising its own archeologist and a staff historian.

The scope of the detective work was easily narrowed: Although about 800 Canadians died during the liberation of Belgium in the Second World War, the Algonquin Regiment bore the brunt of the casualties in that immediate area when it sought to establish a bridgehead across the Leopold Canal. Of the regiment's 29 dead, eight remained missing.

"We knew it had to be one of those eight guys," said Major Dellaire.

With the field winnowed, many signs pointed to Mr. Duncanson, who was 29 when he died. Damaged facial bones were consistent with contemporary reports that he had been shot in the head by a German sniper, dying about an hour later. The gold ring with its cursive initials hinted at his name. Cross-referencing archival dental records confirmed a match.

When Ms. Thomas learned from the DND that her cousin has been identified, she was elated.

"It's amazing and wonderful," she said this week.

But the joy was laced with regret for the generation that preceded her, most of which has passed on without learning Mr. Duncanson's fate.

"I knew all these people who would have mourned for him," she said. "It's been emotional."

Details about his life were scarce in a family spread across the country before the completion of the Trans-Canada Highway, and at a time when memories of the war were rarely discussed.

Largely through Ms. Thomas's enterprising genealogical work, we know that Mr. Duncanson lived in Dutton, Ont., a small town near London; that he drove a truck for the local creamery; and that he married his wife Lillian there.

The couple didn't have children. Based on the evidence in Ms. Thomas's collection, their affection seems to have been reserved for each other. A collage of photos showing Mr. Duncanson in uniform is accompanied by a poem of unknown authorship – maybe written by one of them – titled The Same Old Moon: "We loved neith [sic] this moon/ Then the war came along/ And ended the happiness/ That we had for so long."

If his grave was unmarked for generations, Lillian never forgot her late husband. As with the ring that helped identify him, a set of initials kept his memory alive. Although Lillian remarried, the grocery store she owned with her second husband on Dutton's main street was called K&L, for Kenneth and Lillian.

Canadian soldier gets military burial in the Netherlands 70 years after death
May 6, 2015 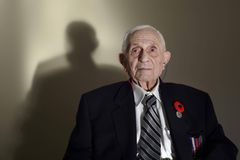