The head of the Montreal, Maine & Atlantic Railway says his firm's assets could be sold to raise funds to pay for rebuilding devastated Lac-Mégantic, but such a deal is only possible if a bypass rail line is built for a new operator.

MM&A chairman Edward Burkhardt said emotions are still running high in the town, making it difficult to reach an arrangement for building the needed new line.

"The accident is a difficult subject to discuss with them," said Mr. Burkhardt. MM&A, under creditor protection in Canada and bankruptcy protection in the U.S., is struggling to maintain operations after its 800-kilometre network was broken in two by the disaster.

On Friday, federal regulators reversed a decision taken earlier in the week to suspend the licence of the railroad. The latest reprieve allows MM&A to continue operating until Oct. 1.

"Conditions are all more favourable now than they were before the decision," said Mr. Burkhardt. Not facing an imminent shutdown, the Chicago-based company has turned its focus to restoring rail service through Lac-Mégantic.

Although all parties involved agree it's an essential step in moving forward, so far, no level of government has come forward with the funds required to rebuild the broken link in the company's network.

The provincial and the federal governments have pledged $120-million to help the city recover from the deadly train derailment. While business leaders had expressed hope some of the money would go toward the construction of a new track, the town has said the aid will help build a new downtown.

The subject of building a new rail line remains emotional in Lac-Mégantic, with locals balking at the suggestion of allowing any train carrying the initials "MM&A" nearby.

"At a social and emotional level, it will be very difficult to convince people to let the train through town again, but for factories in the region, the train is indispensable," said local businessman Gilles Pansera.

The railroad was granted creditor protection on Aug. 8, revealing that it had only $18-million in assets. The clean up and reconstruction of the shattered town is expected to cost a minimum of $200-million.

The current MM&A is unlikely to emerge from the restructuring, however the railroad could sell its assets to "a new interest, free from huge obligations to the province of Quebec," according to Mr. Burkhardt. He expressed confidence that a new company with the same network as MM&A could be profitable.

"In a practical sense, the economic owners of the railway now are the town of Lac-Mégantic and the province of Quebec, they are the main creditors and they own the company. The shareholders have been zeroed out," said Mr. Burkhardt.

Since the disaster, Mayor Colette Roy-Laroche has maintained that restoring rail service to the town's industrial park remains one of Lac-Mégantic's "main priorities." Nearly half of the local economic output emanates from the half dozen factories on the eastern edge of the town.

Local business leaders have so far spawned three plans to restore rail service. All three, however, have been delayed by environmental questions. The Quebec government has yet to certify that the ground where new tracks would be built is free of contamination from the thousands of litres of light crude oil spilled on July 6.

With MM&A facing possible legal action from Lac-Mégantic, town officials have refused to comment on the railroad since the accident. 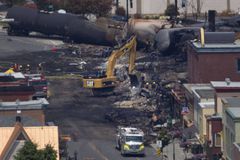 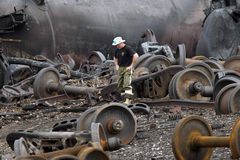