On the video, it is easy to miss – a sideways motion of the head by a swimming narwhal as it chases down a school of fish. But with that split-second flick, and several more like it, scientists working with the Department of Fisheries and Oceans Canada have documented something entirely new to science.

Based on a frame-by-frame dissection of the video, it appears that narwhals are using their iconic tusks to club and stun fish, which they then consume. The surprising behaviour is part of a growing picture of the feeding patterns of one of the most enigmatic of all whale species that could help inform efforts to conserve its habitat in the high Arctic.

"It's fascinating … it really shows how agile they are with their tusks," said Marianne Marcoux, a senior scientist with DFO based in Winnipeg whose team gathered the video during a field expedition last August in Tremblay Sound, a narrow fjord on the north coast of Baffin Island.

Dr. Marcoux, a narwhal expert who was not on the expedition, but who has carefully studied the video, said the whales may be employing the tusk-clobbering method in different ways depending on the number and species of fish they are pursuing. A scientific paper describing the find is being prepared for publication.

A narwhal's tusk is actually a modified canine tooth that protrudes up to three metres from the left upper jaw and grows in a spiral pattern.  Over the years, many theories have been proposed for why narwhals evolved such a distinct anatomical feature, including for digging on the sea floor or for combat with rivals.

Because it is typically only males of the species who sport the tusk, scientists have long regarded its primary purpose to be an advertisement to females, similar to a peacock's tail. A 2014 study demonstrated the tusk may also serve as a sensory organ because it is not sealed in enamel like most mammal teeth and has a nerve fibre running through it that could be sensitive to chemical stimuli in seawater.

The new find adds another dimension to the tusk – one that has not been recorded before because of the technical challenge of observing narwhals up close while they are going about their business in the ocean.

The novel feeding behaviour turned up by serendipity in footage that was gathered by filmmaker Adam Ravetch, who was there on behalf of the World Wildlife Fund Canada, which has partnered with DFO on annual expeditions to Tremblay Sound since 2011.

What made the discovery possible was a camera mounted on a remotely operated drone that was flying over a group of narwhals swimming near the surface of the sound. The drone provided a perspective that would be impossible to get from shore or from the deck of a research vessel.

"As soon as they saw the playback on the small screen, they knew something interesting was happening and definitely needed to be checked out further," said Brandon Laforest, a senior specialist in Arctic species and ecosystems for WWF-Canada, who was at the field site when the video was shot.

So little is known about narwhals that it was only recently that scientists realized the whales come to the sound to feed in the summer. The area is part of the proposed Lancaster Sound national marine conservation area – a designation that could become official later this year.

Researchers estimate that 90 per cent of narwhals spend at least part of their time in Canadian waters. Mr. Laforest said that pressures on the narwhal due to disappearing sea ice, which affects food supply, and increased shipping in the Arctic makes the new discoveries especially relevant for conservation purposes.

"What's really important about this kind of information is identifying fine-scale habitat use," he said. "Where are the sensitive areas where we need to give them a little more space?"

Dr. Marcoux said the video raised many scientific questions that she hopes to address with further research.

"We need to see how important this behaviour is for narwhals," she said. "The better we understand their ecology, the better we can manage them and protect them."

Editor’s note: An earlier version of this story incorrectly said the narwhal’s tusk protrudes from its lower jaw. In fact, it protrudes from the left upper jaw. This version has been corrected. 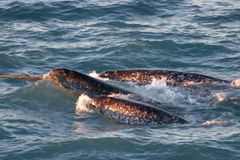