Nova Scotia is launching an inquiry into how provincial and federal systems may have failed Afghan war veteran Lionel Desmond leading up to the day he gunned down his child, wife and mother and then killed himself nearly a year ago.

At a press conference in Halifax on Thursday, the province's chief medical examiner Matt Bowes called for a broad review. "If you look at this case through the lens of preventability, I think one is very much struck by the fact that multiple government agencies and activities touched upon the life of Mr. Desmond," he said. "It's not like Mr. Desmond was completely unknown and then this happened out of the blue. There was a trajectory. There were touch points in our system. I think it would be very valuable to look at how those things occurred and how we might, in retrospect, have done it differently."

Mr. Desmond was out of the army for 18 months when he shot and killed his wife, Shanna Desmond, 10-year-old daughter, Aaliyah, and mother, Brenda Desmond, before killing himself inside his in-laws' home in Upper Big Tracadie on Jan. 3, 2017.

An infantryman with the 2nd Battalion of the Royal Canadian Regiment in Gagetown, N.B., Mr. Desmond, 33, was struggling to overcome severe post-traumatic stress disorder and depression. He is one of more than 70 soldiers and veterans who have killed themselves after serving in the Afghanistan war, a continuing Globe and Mail investigation has found.

Dr. Bowes said the magnitude of this problem and significance of the killings factored into his decision to recommend an inquiry under Nova Scotia's Fatality Investigations Act.

"I am mindful that this is an important issue. This has a scale that reaches well beyond Nova Scotia's borders and the scale of the response to that issue does not seem to be satisfactory yet," Dr. Bowes said.

"The purpose of this, of course, is to look for some tangible connection between the deaths and the appearance of a failure of policy or practice, which if corrected, is likely to prevent future deaths of this same type."

Involving Veterans Affairs in the inquiry is crucial, Dr. Bowes said, because many of the issues touch on federal or shared federal-provincial responsibility.

"We are prepared to make available necessary information on matters including federal care provided to veterans and their families; how veterans' operational stress injuries are addressed; and the continuity of care provided to veterans. While we are committed to offering the fullest support available, we will also need to see the terms of reference before we can respond more [fully]," Mr. O'Regan said.

The Department of National Defence said the Canadian Armed Forces is grateful to Dr. Bowes for the attention he's given to the case.

"Although details remain to be determined, we intend to work closely with the Province of Nova Scotia and our colleagues at Veterans Affairs Canada (VAC) to provide support as requested during the inquiry," said senior communications adviser Andrew McKelvey in a statement.

In October, Veterans Affairs and National Defence adopted a more aggressive strategy to prevent suicides among soldiers and veterans.

Just months before the killings, Mr. Desmond had attended a Veterans Affairs in-patient clinic at Ste. Anne's Hospital in Montreal from June to August, 2016.

Back home in Nova Scotia, he struggled to navigate the VAC system to get the support he needed. In the days leading up to the tragedy, Mr. Desmond showed up at the emergency room of St. Martha's Regional Hospital in Antigonish begging for help.

Despite repeated calls for an inquiry from the families involved, the announcement comes nearly a year after the fact.

Mr. Desmond's sister, Chantel Desmond, said in a statement that it's a step toward justice for her family and all veterans who are struggling.

"We fought for my brother just like he selflessly did for us in Afghanistan," said Ms. Desmond. "He came back wounded mentally and unfortunately a tragedy happened. My twin sister and I didn't give up. It paid off and today I can say this is probably the biggest step toward healing."

Having the news come on Dec. 28 was especially painful for Thelma Borden, who is Shanna's mother and Aaliyah's grandmother.

"I feel better in one way, but because it's on my granddaughter's birthday, it's overwhelming," she said.

"If it had've been a different day, I might say 'yes, that's good.' … If only they had've got this done sooner."

Mrs. Borden recalled speaking to Aaliyah on the phone this day last year.

"She was so happy," she said, choking up with emotion. "She said 'Nanny, it seems like I'm not going to see you again.' So I said 'You'll see Nanny. Nanny's coming home in the spring.' … For her to say that at that time – it's a hard thing to deal with."

Mark Furey, Nova Scotia Justice Minister and Attorney-General, said the appointment of a judge and terms of reference for the inquiry will be announced in the new year.

Several veterans' groups and individuals have also repeatedly called for an inquiry, including Vets Canada and Wounded Warriors Canada.

Trev Bungay, a retired soldier who served in Afghanistan with Mr. Desmond, questioned why it took almost a year to recommend an inquiry. "It's about time," he said in an interview from Fredericton, N.B., adding that Ottawa and the province "wasted a lot of time blaming each other and trying to figure out whose fault it was."

Still, Mr. Bungay said he's hopeful the inquiry will provide some badly needed answers for the family, as well as ensure better services are in place for veterans in the future. "At least the family can have some sort of closure. For them this has been a nightmare."

Peter Stoffer, a former NDP MP and long-time veterans' advocate, said an inquiry should have been called by Ottawa because veterans' care is a federal responsibility but he commended the move nonetheless.

"The number one question is: How does someone who wears a uniform of Canada all of a sudden take his life and the life of three of his loved ones? … That's why an inquiry is so required in this particular circumstance," Mr. Stoffer said.

"It's important for the family to get some closure and for the general veteran community across the country to understand what happened, because this just doesn't have ramifications and possible recommendations for Nova Scotia. This could actually go right across the country." 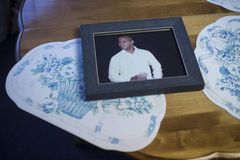 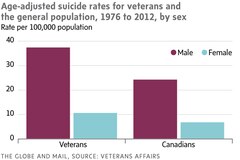