A group of Mi'kmaq protesters and their supporters are planning to slow down traffic on one of Nova Scotia's main highways this week in a bid to stop construction of a natural gas storage facility near Alton.

Group spokeswoman Cheryl Maloney says the protesters planned to light a ceremonial fire and set up a teepee Monday near Highway 102 north of Stewiacke, but the actual traffic slow-down won't happen until Wednesday morning.

Some of the 20 or so protesters at the site, about 60 kilometres north of Halifax, placed placards by the side of the highway on Monday. Highway 102 links Halifax with Truro, where Highway 104 extends to New Brunswick in the west and Cape Breton in the east.

The First Nation bands in nearby Millbrook and Indian Brook want the project stopped because they say there hasn't been enough consultation regarding the potential impact on the environment, Maloney said in an interview from the protest site.

"This has gone under the radar of local citizens who are now just saying, 'What is going on?' " she said.

"We need the province and the feds to take a good look at how this company got its environmental assessment and if they need to do another one. ...They also have to consider the impact on aboriginal title and the need for consent."

Alton Natural Gas Storage, a subsidiary of Calgary-based AltaGas (TSX:ALA), wants to store natural gas in three underground salt caverns that will be about 1,000 metres underground. Each of the caverns is expected to measure about 80 metres high by 50 metres wide.

To create the caverns, the company plans to drill into the salt formations and pump in water from the nearby Shubenacadie River to dissolve the salt. The leftover brine water will then be slowly pumped back into the river system.

Alton president David Birkett issued a statement Monday saying the company has been in regular contact with Mi'kmaq for the past eight years and it is open to more meetings.

The environmental assessment process required consultation with First Nations, he said, adding that the company met with the chiefs from Millbrook and Indian Brook in 2006, conducted two Mi'kmaq ecological studies in 2006 and 2012, met with the Native Council of Nova Scotia in 2007 and hosted a site tour for Mi'kmaq-owned businesses in 2009.

More recently, the company provided updates at an open house in 2011 and invited the Native Council of Nova Scotia to provide submissions to the environmental assessment process in February 2013. Meetings were also held with the Mi'kmaq in June, August and earlier this month, he said.

"We have met with Mi'kmaq about Alton Natural Gas Storage and will continue to do so in the days, weeks, months and years to come," Birkett said.

Nova Scotia's Environment Department also said it is continuing to consult with the Assembly of Nova Scotia Mi'kmaq Chiefs on the project.

Spokeswoman Heather Fairbairn said in a statement that the company still requires permits from Natural Resources, Agriculture and Environment before it can begin using a brine storage pond at its site.

Alton says salt caverns have been used to store natural gas in Canada since the 1960s.

The storage facility in Nova Scotia will be used to stabilize the province's supply of natural gas. The gas from the caverns would be linked by pipeline to the nearby Maritimes and Northeast pipeline, which extends from Nova Scotia to the northeastern United States. 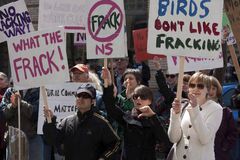 Nova Scotia to introduce legislation to ban fracking for onshore shale gas
Report an error
Due to technical reasons, we have temporarily removed commenting from our articles. We hope to have this fixed soon. Thank you for your patience. If you are looking to give feedback on our new site, please send it along to feedback@globeandmail.com. If you want to write a letter to the editor, please forward to letters@globeandmail.com.
Comments