A police officer convicted of one assault related to the violence-marred G20 summit in Toronto four years ago was acquitted Wednesday in a second case because the only evidence against him had been ruled inadmissible.

As a result, the prosecution presented no evidence against Constable Babak Andalib-Goortani, who was charged with using a weapon to assault a blogger at the Ontario Legislature.

The photograph on which the case depended showed a uniformed officer about to strike Wyndham Bettencourt-McCarthy at a protest during the weekend summit in June, 2010.

A police colleague was set to testify that Andalib-Goortani was the officer seen in the image, which became the subject of extensive pretrial hearings in May.

"The case against him depended on an image, a photograph taken from the Internet," defence lawyer Harry Black said in an interview. "The expert evidence established that whatever photograph it came from had been altered and the nature of the alterations could not be known."

Given the uncertain provenance of the image, a judge last month ruled it inadmissible, meaning the second officer could not use it to identify Andalib-Goortani as Bettencourt-McCarthy's assailant.

"He would be looking at a document that had been altered," Black said. "Without the photograph, the Crown had no case."

In Wednesday's brief trial in Ontario Superior Court, the officer changed his election from a trial by judge and jury to judge alone. He was then arraigned and pleaded not guilty.

After the prosecution presented no evidence, the justice entered an acquittal.

Crown lawyer Philip Perlmutter would not say if an appeal of the earlier ruling was planned.

Andalib-Goortani is one of only two officers criminally charged in relation to the G20 in June, 2010, in which a few dozen vandals rampaged through the downtown and police made unprecedented mass arrests that drew widespread condemnation for the violation of civil rights.

He was convicted last year in the separate beating of protester Adam Nobody, partly based on videotape evidence, and sentenced to 45 days in jail. Evidence was that he struck Nobody several times with his baton even though the protester was already on the ground and surrounded by other officers in the process of arresting him.

The judge said the officer had shown no remorse and noted his name tag and badge weren't visible, which she said was deliberate.

Andalib-Goortani is appealing the conviction, expected to be heard later this fall. He was granted bail pending the appeal and later suspended without pay.

He did not comment on Wednesday's acquittal and Black would not say what he is currently doing.

The constable still faces internal misconduct hearings for allegedly using excessive force against the blogger. The hearings were put on hold pending the outcome of the criminal proceedings.

The only other officer criminally charged in relation to the G20, Constable Glenn Weddell, was previously acquitted. 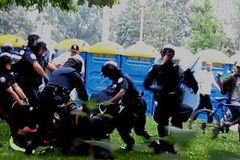 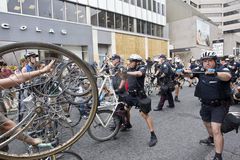