An Edmonton judge deciding whether former Guantanamo Bay inmate Omar Khadr should be transferred from a federal prison says his ruling will come down to whether he believes the 27-year-old is serving time as a youth or an adult.

Justice John Rooke said Monday that the U.S. military did not specify that when it handed Mr. Khadr an eight-year sentence for killing an American special forces soldier in Afghanistan when Mr. Khadr was 15.

He is now an inmate at the maximum-security Edmonton Institution. His lawyer, Dennis Edney, argued that he should be treated as a young offender and moved to a provincial jail.

Mr. Edney told the court that an eight-year sentence for the murder and four other crimes only makes sense as a youth sentence.

But the federal government argued that Mr. Khadr was given eight years as a youth for murder and the sentences on the four remaining offences were to be served concurrently as an adult.

Mr. Edney called the federal government's position an "absurdity" and said its math doesn't make sense. He said if Mr. Khadr had committed the crimes in Canada, he would be serving less time.

He also filed an affidavit from a U.S. military law expert stating there's no such thing as concurrent sentences in their law books.

"We think it's a simple argument," Mr. Edney later explained to reporters outside court.

"It requires a determination be made whether the sentence he received in Guantanamo, if it occurred here in Canada, would be treated as a youth sentence. And we say yes."

After several hours of complex legal discussion, the judge said he was tempted to issue his decision but the case requires detailed written reasons. Justice Rooke gave no date when he would be ready. He also gave no hint at which way he was leaning.

He said the case is about interpretation of the law.

"We are not applying policy. That's for Parliament … There is no discretion that was exercised that needs to be reviewed," Justice Rooke said.

Prime Minister Stephen Harper waded into the debate during a Monday news conference in Ottawa.

"This is an individual who, as you know, pleaded guilty to very serious crimes including murder and it is very important that we continue to vigorously defend against any attempts, in court, to lessen his punishment for these heinous acts," Mr. Harper said, while answering a larger question about fears Muslim youth are being radicalized.

Mr. Edney chastised the Prime Minister for his comment.

"Canadians should be concerned with the interference by our government in the judicial system without waiting for the facts to come out. This is not about guilt or innocence. This is just about where he gets placed."

Monday's appearance was the first time Mr. Khadr has been seen in public in more than a decade.

Mr. Khadr flashed a broad smile as he was led into the courtroom, sporting a white polo shirt and full beard. He shook hands with his lawyers and waved at some of the dozens of supporters in the courtroom.

Many with Amnesty International wore orange ribbons to support Mr. Khadr. Some passed around a greeting card to sign well wishes.

Lawyer Bruce Hughson, representing the federal government, told the judge that Mr. Khadr has been treated no different from any other Canadian who commits a crime outside the country and returns home to serve his sentence.

He said that Canada has no role to review or amend the decision of a foreign court on such an offender.

The federal government has insisted that Mr. Khadr is a dangerous terrorist who deserves to be treated as such.

Omar Khadr moved to Edmonton prison after months in solitary confinement
May 29, 2013 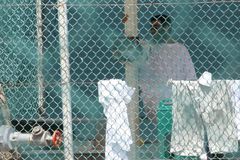