A judge who wore a Donald Trump campaign hat into court will face a public disciplinary hearing that could result in his firing, after the Ontario Judicial Council received 81 complaints about his behaviour.

The case against Provincial Court Justice Bernd Zabel is not only that he wore a "Make America Great Again" hat in court but that when he apologized a week later – calling it a misguided attempt at humour, and not political – he contradicted a statement he had made, in which he described himself as the sole Trump supporter among the judges in Hamilton, where he sits.

The council alleges that Justice Zabel's actions harmed public confidence in his ability to be impartial, "compromised the public's perception of the independence of the judiciary from politics" and were an abuse of power. The public hearing is scheduled to begin on Aug. 23 in Toronto.

Justice Zabel, a graduate of the University of Windsor law school – where 27 faculty members signed a complaint to the judicial council against him – has been a judge since 1990.

A four-person panel will decide whether he has committed judicial misconduct and, if so, whether he should be warned, reprimanded or even dismissed from his $288,000-a-year job, in order to protect public confidence in the judiciary. The panel will include a judge from the Ontario Court of Appeal, a judge from the Provincial Court, a lawyer and a member of the public. Any recommendation for removal would ultimately need to be affirmed by the Ontario cabinet.

Justice Zabel has not been assigned cases since Dec. 21, when he suddenly stopped appearing at court, with no notice given to local lawyers or the public. He could not be reached for comment Wednesday.

The 81 complaints equals the number received by the council against all Provincial Court judges in the previous three years, according to the latest annual report on the council website. It is more than the 69 complaints that the Canadian Judicial Council received about Robin Camp, who asked the victim in a sexual-assault case in Calgary why she didn't keep her knees together. Mr. Camp resigned in February as a Federal Court judge after the council recommended his removal.

Since 2002, the Ontario Judicial Council has held nine public disciplinary hearings. None resulted in a recommendation for removal. One judge resigned before evidence was called. Another judge resigned after council ruled he had committed misconduct, but before it decided what punishment should be meted out. That case set the previous record for most complaints to the Ontario Judicial Council – eight complainants alleged improper touching, in incidents outside the courtroom.

Laying out the case against Justice Zabel will be lawyer Linda Rothstein, who has been involved in high-profile inquiries. She was commission counsel to the Goudge Inquiry into Pediatric Forensic Pathology probing wrongful convictions linked to the work of Charles Smith. She was also counsel to the City of Toronto in the computer-leasing inquiry and lead counsel to the Motherisk Hair Analysis Review involving the Hospital for Sick Children.

The council said it will not make public the names of those who complained, until they are revealed in evidence at the hearing. Several individuals and groups have confirmed to The Globe and Mail that they have complained, including the Canadian Muslim Lawyers Association, the Canadian Association of Muslim Women in Law, the Criminal Lawyers' Association, the Women's Legal Education and Action Fund (LEAF) and Osgoode Hall law professor Gus Van Harten.

"In a nutshell, LEAF's concern is that Justice Zabel's partisan display raises the appearance of, or apprehension of, a lack of impartiality, contrary to principles of judicial ethics," Kim Stanton, the group's legal director, said in an e-mail.

Twice, on the day after the November election that brought Mr. Trump to power, Justice Zabel wore the cap into court while carrying out his judicial duties, according to the particulars of the complaint released by the council. He made two comments about the hat: "Just in celebration of a historic night in the United States. Unprecedented;" and, "brief appearance for the hat. Pissed off the rest of the judges because they all voted for Hillary, so I was the only Trump supporter up there, but that's okay." 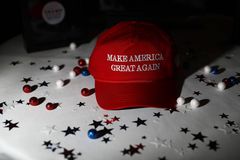 Ontario judge apologizes for wearing pro-Trump hat in court
November 15, 2016
Discipline sought for Ontario judge who wore pro-Trump baseball cap
November 11, 2016
Follow Sean Fine on Twitter @seanfineglobe
Report an error Editorial code of conduct
Due to technical reasons, we have temporarily removed commenting from our articles. We hope to have this fixed soon. Thank you for your patience. If you are looking to give feedback on our new site, please send it along to feedback@globeandmail.com. If you want to write a letter to the editor, please forward to letters@globeandmail.com.
Comments