Despite widespread attention paid to the opioid crisis, the number of prescriptions filled for the powerful painkillers and the number of people taking them have continued to rise in Ontario, a new report says.

More than 9.1 million opioid prescriptions were filled in the province in 2015-2016, a jump of about 5 per cent from three years earlier, according to the study, which also found that approximately 12,000 more individuals were prescribed the potentially addictive morphine-like medications in 2015-2016 than in 2012-2013.

The recent uptick is small compared to the runaway increases in opioid prescribing in the first decade of this century, but the fact that prescriptions have not fallen shows how intractable the opioid problem has become.

Related: A Killer High: How Canada got addicted to fentanyl

The provincial government and the regulatory body that governs physicians have lately tried to reduce the imprudent prescribing of opioids such as oxycodone, hydromorphone and fentanyl, the drugs at the root of an epidemic of addiction and overdose. Yet the report released on Wednesday by Health Quality Ontario, an agency that advises the province on improving the health-care system, suggests those efforts have not borne much fruit – at least not as of the spring of last year.

"I think it is surprising," said Joshua Tepper, a Toronto family doctor and the president of Health Quality Ontario. "I think a lot of people would have expected the trend to be dramatically flattening or actually decreasing."

Drawing on statistics from the province's narcotics monitoring system, HQO analyzed all the opioid prescriptions in Ontario over three years, save for those filled in hospitals and prisons. (The study excluded opioids used to treat addiction, such as methadone.)

One in seven Ontarians filled an opioid prescription in 2015-2016. That figure covers everyone from dental patients who received a one-time codeine prescription after a wisdom-teeth removal to people with chronic pain who refilled their hydromorphone prescriptions again and again over the course of the year.

The results revealed significant increases in the number of people prescribed two kinds of opioids: hydromorphone (up 29 per cent) and tramadol (up 12 per cent), a pair of drugs that grew in popularity after the maker of the blockbuster drug OxyContin pulled it from the Canadian market in 2012.

The number of people who filled prescriptions for codeine and codeine compounds and for fentanyl patches, meanwhile, declined over the three-year period of the study, although codeine products remain by far the most frequently prescribed opioids in the province.

Tara Gomes, a scientist at St. Michael's Hospital in Toronto, said an 18-per-cent drop in the number of people prescribed fentanyl patches could be the result of "patch-for-patch" programs, which are supposed to decrease diversion to the street by forcing patients to return their used painkiller patches before receiving fresh ones.

Illicit fentanyl smuggled in from China could also be siphoning away some of the demand for prescription fentanyl, she added.

Dr. Gomes warned against reading too much into the 5-per-cent increase in overall opioid prescriptions: Doctors wary of the addictive power of the medications could be writing prescriptions for shorter durations and smaller amounts, which could drive up the raw total of prescriptions.

"It could be a positive finding," she said.

Opioid use is much more common in some parts of Ontario, a finding that Dr. Tepper said should ring a "huge alarm bell," for physicians and policy makers.

In the Erie-St. Clair region, which includes Windsor, the equivalent of one opioid prescription for every person was filled in 2015-2016; in the North East region, the prevalence of opioid use was even higher.

Those figures, which reflect individuals filling multiple opioids prescriptions over the course of the year, are more than twice as high as the rates in Toronto and its suburbs.

Alan McQuarrie, executive director of the Community Counselling Centre of Nipissing, said a troubling mix of disadvantages has contributed to the opioid crisis in his North Bay community. The population tends to be poorer, sicker and more prone to addiction, problems compounded by a relative dearth of health-care services.

"We do have a lack of pain clinics in the north," he said. "In terms of comprehensive follow-up for pain management, family doctors in the North may not have that background." 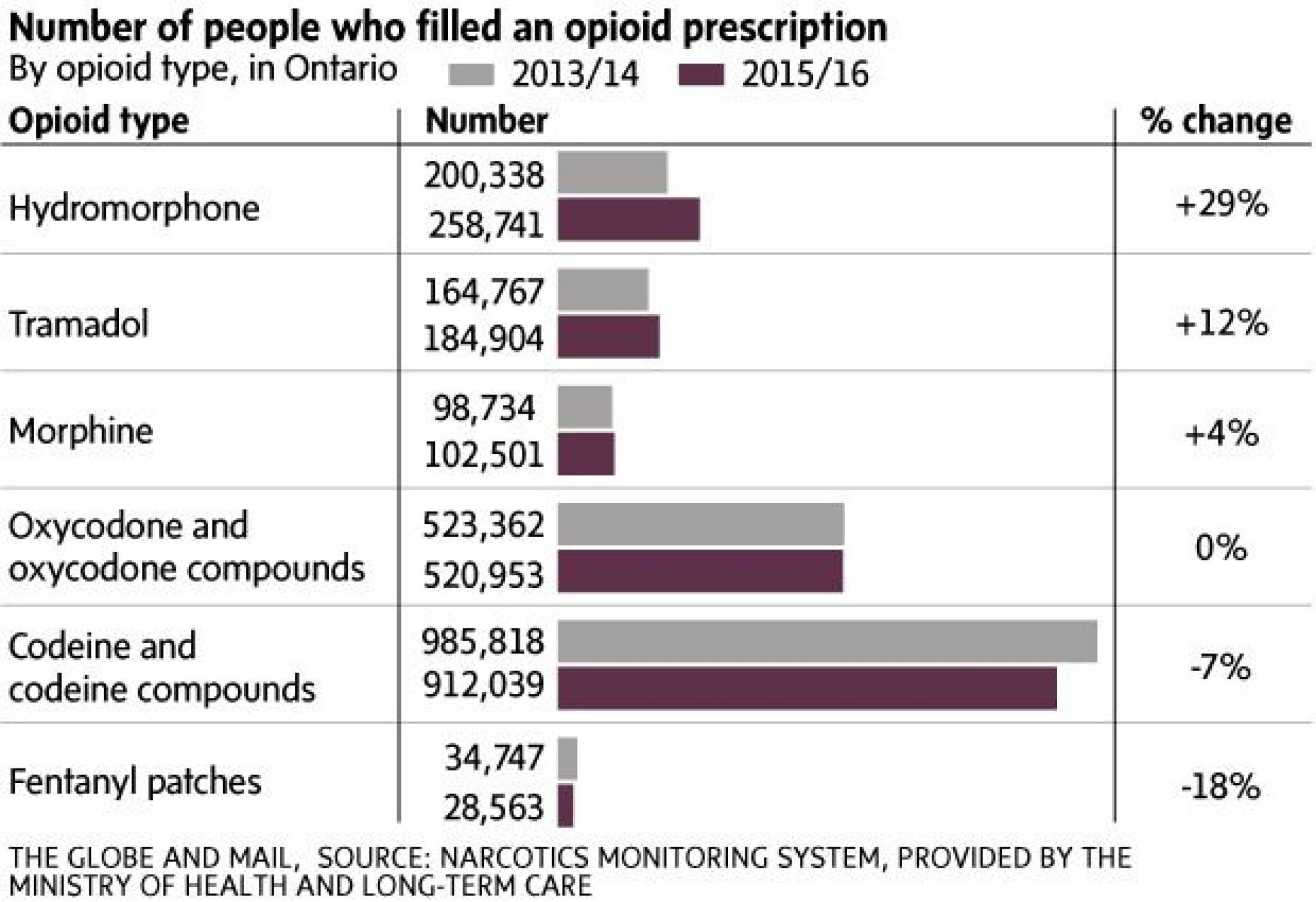 New opioid-prescribing guidelines aim to cut use of potent narcotics
May 8, 2017
Philpott concerned that doctor with Big Pharma ties voted on opioid standards
May 15, 2017
Amid overdose crisis, dialogue on drug use critical, addiction experts say
May 4, 2017
Follow Kelly Grant on Twitter @kellygrant1
Report an error Editorial code of conduct
Due to technical reasons, we have temporarily removed commenting from our articles. We hope to have this fixed soon. Thank you for your patience. If you are looking to give feedback on our new site, please send it along to feedback@globeandmail.com. If you want to write a letter to the editor, please forward to letters@globeandmail.com.
Comments