As many as two Coast Guard icebreakers may be dispatched to the site of a deadly helicopter crash in the remote western Arctic to hunt for answers hundreds of metres below the surface of the Northwest Passage.

The Canadian government is still reviewing options before green-lighting a trip but advance planning is already under way that could send the Amundsen and Henry Larsen to the spot, about 670 kilometres west of Resolute, Nunavut, where three died Sept. 9 in an tragedy that has shaken Arctic researchers.

The voyage would be a salvage operation to retrieve the helicopter – a Messerschmitt-Bölkow-Blohm Bo 105 – from the frigid depths off Banks Island in the McClure Strait – to help determine what caused the accident. The water in the area is 420 metres deep.

The Amundsen lost its commanding officer, Marc Thibault, in the crash along with veteran Coast Guard pilot Daniel Dubé and scientist Klaus Hochheim. The men were scouting the sea ice to determine the best route for the Amundsen, a research vessel carrying scientists taking measurements of the Arctic environment.

The fact that the helicopter sent no distress messages to the Amundsen before it crashed has many in the Arctic research community puzzling over what happened. Did something happen to the pilot before the accident? Was it a very quick accident?

Autopsies are being performed on the deceased in Edmonton.

Martin Fortier, executive director of ArcticNet, the consortium that manages the Amundsen's scientific program, said the vessel is being readied for a trip. A new captain has been flown to Resolute to replace Mr. Thibault.

"I would say that it's 95 per cent sure that it's going to happen but I still need to plan for that other 5 per cent," Mr. Fortier said.

Recovering the helicopter would also help determine whether the aircraft was suffering from safety flaws that might affect copters attached to other Coast Guard ships.

The Larsen, a medium Arctic icebreaker, could help the Amundsen remain in one position while it searches for the helicopter – protecting the other vessel from moving ice.

"Even in open water with no ice at all it is extremely difficult for the ship, with the wind and the currents, to keep its position," Mr. Fortier said.

"There is always the possibility that an ice floe will come and move us around," he said. "We can't have the ice pushing us around."

Even if it manages to avoid ice floes, the Amundsen's search for the helicopter would be tricky in what could be among one of the northernmost salvage operations ever attempted.

The icebreaker has a "moon pool" hatch in the hull that allows direct access to the water. The vessel would lower a cage containing a remote operating vehicle and once near the bottom, the small craft, secured by a tether, would exit the cage to hunt for the helicopter.

It's a delicate operation.

"You're walking a dog that's also walking a dog in heavy winds. And you're trying to manoeuvre the second dog," Mr. Fortier explained.

Jon Lee with the Transportation Safety Board, the agency in charge of probing the crash, said a number of TSB examiners will be arriving in Resolute on Wednesday. "Depending on the circumstances in terms of the vessels that the Coast Guard will have ready to go – this will determine the date they leave Resolute … [for] the accident site."

The location of the crash is about about two days by ship from Resolute, Mr. Lee said. 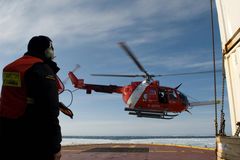 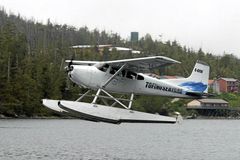