Before he had the bookstore vision, Mel Hurtig once said his life was pretty much "music, girls, sports, whatever."

But if those blithe pastimes defined him in the days before he persuaded a skeptical bank manager and his disbelieving father to underwrite a $3,400 loan for the business, they were planets away from the irascibility and fierce nationalism Mr. Hurtig brought to his life's work and love as a publisher, author, pundit and political agitator.

Mr. Hurtig, who opened Edmonton's first independent bookstore and went on to run for the federal Liberals, fight against free trade, publish The Canadian Encyclopedia, and write several searing commentaries about foreign ownership and cultural imperialism, has died in Vancouver aged 84.

Mr. Hurtig's four daughters were at the hospital when he died of complications from pneumonia on Wednesday.

"He led an extraordinary life," his daughter Leslie said in an interview.

"From the time that he was in his early 20s, he has been a passionate nationalist and that doesn't mean he believed we should be inward thinking. It meant he believed in Canada's sovereignty, and that we were a strong and wonderful nation."

Born and raised in Edmonton, Mr. Hurtig opened the Hurtig Books store in 1956, which grew to be one of the country's largest, and from there, launched a publishing company in the 1970s.

He conceived the idea of creating a Canadian encyclopedia after becoming irritated at seeing libraries full of Americanized history books. With the help of funding from the Alberta government, Mr. Hurtig oversaw the creation of The Canadian Encyclopedia, as a way to address the lack of books about Canada created by Canadians.

"He lived his whole life trying to teach Canadians about themselves," Ms. Hurtig said.

Mr. Hurtig also dabbled in politics. He ran for the Liberals in an Edmonton riding in 1972, but was defeated. A year later, he left the party and established the Committee for an Independent Canada to make the case against foreign ownership and cultural imperialism. In 1985, he established the Council of Canadians. He ran for a federal seat for the National Party of Canada in the 1993 election, but did not win.

The long-time Edmonton resident moved to Vancouver 11 years ago to be be closer to family.

He continued to write. His last book, published last year, was The Arrogant Autocrat: Stephen Harper's Takeover of Canada, a 140-page, self-published treatise on the former prime minister.

Ms. Hurtig said he had been more optimistic about the new government of Liberal Prime Minister Justin Trudeau.

On Wednesday, Ms. Hurtig said she read her father newspaper headlines about the launch of the inquiry into murdered and missing women.

"He was always optimistic. He never looked behind. He looked forward. When things would not go well in business, it didn't matter. ... He was optimistic to the day he died."

Last year, upon the release of his last book, Globe and Mail writer Roy MacGregor asked him if he ever felt his determined fights against foreign ownership and free trade, poverty and government incompetence were tilting at windmills.

"I've spent an entire life battling like hell against the sellouts in our country. I can tell you I am proud of what I've done. And most of all, I am proud of the response I am getting from the young people across the country. And I can tell you they are passionate Canadians. They love this country.

Plans for a service have yet to be confirmed. 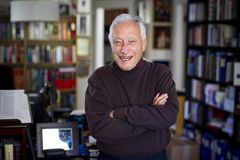