While tens of thousands of Quebec students have loudly opposed tuition hikes in the streets, one law student was quietly fighting the provincewide student walkouts in court Friday.

Guillaume Charette's legal battle was a lonely one.

With little time, pitted against the legal teams of student associations and his own university, and butting up against a wealth of jurisprudence, Mr. Charette lost his bid for a temporary injunction allowing free access to class.

But he remained upbeat. Outside the courtroom Friday, he told reporters that the legal crux of the matter had not yet been discussed.

"Whether the students have the right to strike in its current form by blocking access to the university, the judge did not rule [on that]" he said.

"Someone needs to set the legal record straight on the issue because what's happening now is neither clear nor legal."

Another student appeared to have more success in a separate case elsewhere in the province Friday, winning a legal bid to force a junior college in the Saguenay region to reopen classes next week and put a halt to picketing.

Students have taken to the streets in recent weeks to counter the Charest government's plan to nearly double tuition fees over five years, to $3,800 a year.

At various points, as many as 200,000 students from universities and junior colleges across the province have abandoned their classrooms. The forced cancellation of many classes has prompted the Quebec government to warn that students might have to repeat the semester.

Mr. Charette said he has received support from many people since he first went to court this week, arguing for unimpeded access to classrooms and questioning the legitimacy of students involved in so-called "strike" action.

He wasn't surprised when his request for an emergency injunction was turned down, which would have required that very specific criteria be met.

But the 25-year-old law and political science student, who pleaded the case himself, said he wanted to send a message by going to court.

"I was trying to provide minimal rights to students who want to be given access to their school, notwithstanding whether their faculty association voted for or against the strike," he said after the written decision was issued.

The government says its hikes will still leave Quebec with among the lowest tuition rates in the country. But student groups are against the increases, arguing they would reduce access to higher education.

Amid the chorus of opposition led by student associations, a quieter contingent has spoken out against the strikes. On Friday, another student in the Saguenay region successfully argued in court that classes should resume at her school.

Justice Jean Lemelin ordered an injunction in Quebec Superior Court ending the strike at a college in Alma.

The temporary injunction means picketing must end and students must return to class as of Monday, according to a statement on the school's site. Students had voted to walk out at that institution in early March.

In the Montreal case, Mr. Charette had to demonstrate an urgency in his application and prove he had suffered irreparable harm. In his affidavit, he mentioned he'd missed two days of class in the last week, including last Monday after a protest blocked access to the Université de Montréal.

He filed a motion against the law students' association, the student union, the university and an umbrella association of student groups that is one of the main protest organizers.

Justice Luc Lefebvre ruled Mr. Charette's request failed on all counts. For starters, there was no need for an emergency injunction because classes had resumed in his particular faculty, the court ruled.

"As the applicant has lost but two days of classes and there is no intention to cancel the semester, this tribunal finds that the applicant has not demonstrated the irreparable harm required for issuing an injunction at the provisional stage," Justice Lefebvre wrote.

Mr. Charette says his attempt failed because he wasn't able to prove the injunction was necessary. But he argued there is still a broader legal question that needs to be answered as to whether a student union vote trumps an individual student's right to attend class without obstruction, harassment, intimidation or interruption.

"I believe that people's rights are more important than students' votes within an association inside a university," he said.

"It's wider than that – we're talking about democracy and justice and people's rights and that's paramount."

Some students say they have faced threats for opposing the protest movement. In his filing, Mr. Charette claimed he was roughed up while trying to attend a class this week.

"If one has to risk his personal well-being to access a service that he paid for and that is essential in democratic society, it seems to me the Charter should allow that student to [attend]" he said.

The student associations and groups that were targeted in the case were happy with the ruling, saying the issue did not belong before the courts.

"It only confirms what we said from the beginning: The issue is much more political than legal," said Stephanie Tougas, the Université de Montréal's student association secretary-general.

A spokesman for one of the major student associations said there are other mechanisms to deal with these sorts of questions.

"This young man is in favour of the tuition increase, he is against the strike and he tried to use the justice system to prove his point," said Gabriel Nadeau-Dubois.

"The way to have a debate in a democratic movement like the student movement is to go [before]the general assemblies and not before a judge."

Police, students clash in Quebec cities as protests against tuition hike continue
May 8, 2018 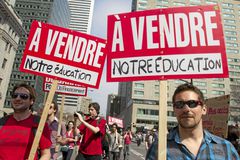 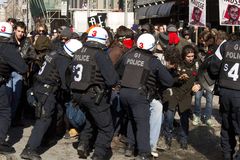 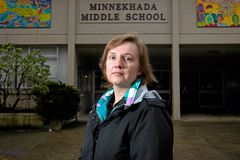 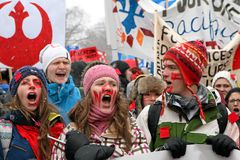 Riot police step in as Montreal students block bridge in tuition protests
May 3, 2018 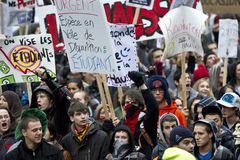 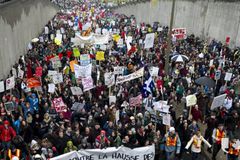