Adult Fort McMurray residents driven out of the northern Alberta city by a massive wildfire stand to individually receive almost $2,000 in direct aid from assistance programs engineered by the provincial government and the Canadian Red Cross.

The Red Cross program, which will provide $600 to each adult registered with the agency and $300 for each dependent, reflects the largest and quickest distribution of money in the agency's history – a response to a disaster which flared up with the start of the fire 10 days ago.

"This is the most important cash transfer we've done in our history and the fastest one," Conrad Sauvé, chief executive officer and president of the Canadian Red Cross, said in a joint news conference in Edmonton on Wednesday with Alberta Premier Rachel Notley.

"We will be working with the province in the weeks, the months and the years to come, because this recovery will be long, but this is just the first phase of it."

For her part, Ms. Notley announced plans to distribute debit cards to affected residents worth $1,250 for eligible adults and $500 for children.

Standing in a slow-moving line outside the Bold Centre in Lac La Biche late on Wednesday, Laura Hammond said she was happy to hear about the cash for evacuees.

"It's really good," she said. "I think it will be helpful because there is a lot of financial uncertainty."

Ms. Hammond said she's been staying at a co-worker's place in Edmonton, and will probably use the money for accommodations.

"I'm really grateful that the government is doing this for people," she said.

Down the line, brothers Darcy and Lloyd Cree said they had been scrounging to survive in the days since the evacuation, unable even to do laundry.

Darcy Cree said the first thing he was going to do was wash his clothes.

"I want to do some laundry," he said. "Then just survive until we get home."

The Red Cross has, so far, raised $67-million to support its efforts in Fort McMurray. The federal and Alberta governments have each said they would match such donations.

Mr. Sauvé said Red Cross funds would be issued through an electronic transfer to e-mail addresses provided by evacuees. They will be able to transfer the money to their bank accounts.

Those without bank accounts will be helped in other ways, Mr. Sauvé said.

He said 80,000 evacuees have registered with the Red Cross. Most are in Alberta, but some have moved elsewhere in Canada. He said the Red Cross will take care of evacuees wherever they are.

Ms. Notley said the debit cards loaded with provincial money will be distributed at four locations in Edmonton, Calgary and Lac La Biche.

The Premier conceded there will be long lineups early on in the distribution. She asked evacuees who do not need government emergency funding immediately to let those in "desperate need" be first in line. "Be assured, the funding will not run out."

Ms. Notley said the government is working, with the Red Cross, on a plan to get funds to evacuees who have left Alberta.

Ms. Notley also said cabinet would, on Thursday, be discussing the return of evacuees to Fort McMurray. Plans are to provide a plan for re-entry within two weeks.

As of Wednesday, the Fort McMurray wildfire was 229,000 hectares, consistent with the size a day earlier, according to a government advisory. Seven-hundred firefighters are working on the blaze, burning about 25 to 30 kilometres from the Saskatchewan border.

On Wednesday, RCMP provided a sense of the current state of Fort McMurray. RCMP Inspector Kevin Kunetzki, returning from his deployment in the city, told a news conference in Edmonton that police have knocked on the doors of all homes in the area, but did not forcefully enter.

Insp. Kunetzki said police found 29 occupied residences, largely by people without vehicles or phones. He said police helped most of those residents leave, but "in limited cases," occupants refused to go so police notified the emergency-operations centre for follow-up.

He also reported 100 cases of forced entry into homes. While all will be investigated, he said some may be cases of neighbours checking that others got out safely or rescuing pets. He noted police often saw valuables in the homes, suggesting something other than a criminal act.

One suspect in a break and enter has been tracked down by police and charged, he said.

The inspector said pets were observed in 80 cases and reported to animal control, or police helped evacuate them.

There are currently about 300 police officers in the community. Too soon to assess impact of oil disruption on Alberta economy: Notley
May 10, 2016 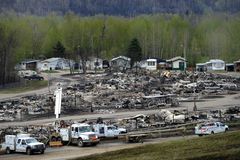 Follow Ian Bailey and Jana G. Pruden on Twitter @ianabailey @jana_pruden
Report an error Editorial code of conduct
Due to technical reasons, we have temporarily removed commenting from our articles. We hope to have this fixed soon. Thank you for your patience. If you are looking to give feedback on our new site, please send it along to feedback@globeandmail.com. If you want to write a letter to the editor, please forward to letters@globeandmail.com.
Comments