New Brunswick is revising its approach to investigating sexual crimes and improving services for victims amidst a provincewide review of several hundred cases handled by police that exposed systemic problems.

The study is the first of its kind in Canada and examined municipal and regional police files from 2010 to 2014, and RCMP files from 2011 to 2016. The results showed that nearly 800 sexual crime occurrences, which make up 13 per cent of the cases investigated during that time, were misclassified as unfounded, a term that means the investigating officer does not believe a crime has occurred. Reviews found that in many cases, officers believed the victims but couldn't gather enough information to prove a criminal case.

At least 100 police services across Canada are reviewing their sex-crime files, an effort prompted by a Globe and Mail investigation that revealed Canadian law enforcement has been dismissing sexual-assault allegations at a higher rate than other crimes.

New Brunswick is the only government so far to publicize its findings.

In assembling the provincewide data, New Brunswick police uncovered some unexpected information related to crimes against youth and specifically by adult males toward young females. The review found that "a unique and disproportionate" number of victims of unfounded crimes were 18 or younger and female. The victims in almost half of the youth cases were 12 years of age or less; their suspected perpetrators were predominately male adults.

Steve Roberge, executive director of the New Brunswick Police Commission, an independent civilian oversight body, said the report's findings on youth victims was "a revelation to us and a bit of a surprise."

The report says that additional analysis is required to assess whether police ought to be using novel approaches to investigate youth-related sexual-assault crimes.

The overall results of the review point to the need for improvements in the way police handle sexual-crime investigations, ranging from specialized training, oversight and collaboration with sexual-assault advocates and experts, said John Jurcina, New Brunswick's assistant deputy minister of justice and public safety.

"There is a clear need for a victim-centric approach to investigations and the interest of victims must always be prioritized," Mr. Jurcina said. "A sexual crime is not like others. Its profound effects can last a lifetime. Our goal is to remove barriers that victims face and ensure they are supported throughout the entire judicial process."

The review, which included nine municipal and regional police forces as well as the RCMP, was launched after the Canadian Association of Chiefs of Police requested all services examine their practices around sexual-crime investigations. Their request was a response to The Globe's investigative series, Unfounded, published last February. The Globe determined that police were classifying one out of every five sexual-assault files as "unfounded."

New Brunswick had the highest unfounded rate of any province, with 32 per cent of sexual-assault allegations ending up in that category. In response, the province and the New Brunswick Police Commission urged police services to review cases. The process has been under way for months.

The Saint John police force had one of the highest rates of unfounded cases in The Globe's investigation, at 51 per cent. In July, the city's chief of police said his force had no plans to change the way officers investigate complaints of sexual violence after its review found none were misclassified.

The report underscores what is at stake when complaints of sexual offences are closed as unfounded: the increased under-reporting of sexual crimes. "The tragedy of under-reporting cannot be addressed until those who experience sexual offences are confident a report will achieve a response that is not only professional and effective but also respectful and validating," the report reads.

Beth Lyons, executive director of the New Brunswick Women's Council, said she is pleased with the results of the report, which goes beyond pointing out police case classification errors and highlights the systemic problems related to sexual-assault investigations that must be addressed.

"Unfounded rates … are just an entry point into this broader issue which is … that policing and the justice system don't meet the needs of victims and survivors of sexual assault," she said. "We want to be really clear that the issue around unfounded rates is not just an administrative issue."

Ms. Lyons went on to say that police forces and the justice system need to earn "the confidence and trust of survivors of sexual assault."

Mr. Jurcina said that a group of stakeholders in New Brunswick will work to resolve the systemic gaps the review has identified, including how police forces investigate sexual crimes.

Efforts are already under way to improve service to female victims across the province.

In Edmundston, the municipal police force has partnered with a shelter for victims of sexual assault. Staff from the shelter are available to police officers if required during an investigation.

The Globe recently reported on reforms that are under way at the Fredericton Police Force.

Chief Leanne Fitch has spoken in favour of collaboration with community partners, a trauma-informed approach to investigations and, most recently, her department has committed to implementing violence-against-women case reviews based on the Philadelphia Model. That approach gives advocates access to police sexual-assault files to look for signs of bias and investigative errors.

Chief Fitch said her force is still working through some of the privacy issues, but she hopes it will be running by next year.

Jennifer Richard, director of community development at the Fredericton Sexual Assault Centre, said her organization is looking forward to providing more training and oversight assistance for police and other members of the justice system.

What it's like to report a sexual assault: 36 people share their stories
March 17, 2017
Unfounded: How Canadian police forces co-ordinated one response to The Globe’s queries
June 13, 2017
Unfounded: These Canadians are working on the front lines of a changing system
December 12, 2017 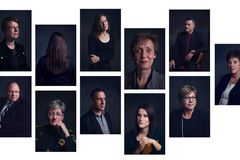