It's still out there, quietly bouncing about the Internet to the delight of a giggling world. Three years ago, the story went viral when a CTV anchor on Vancouver Island naively asked his colleague if she'd care to "canoodle" before giving her weather report.

Hard to imagine a Canadian unaware of what that word means, even if the dictionaries claim its origins are "unknown." We all know where "canoodling" comes from. After all, as Pierre Berton once said (although he later denied it), "A true Canadian is one who can make love in a canoe without tipping." However, my paddling pal Phil Chester would argue that "anyone can make love in a canoe. It's a Canadian who knows enough to take out the centre thwart."

Last year, the Canadian Canoe Museum in Peterborough, Ont., paid tribute to romance with an exhibition called Can I Canoe You Up the River? The title is from an old Arthur Godfrey song filled with innuendo – "C'n I canoe you up the river? / Like I did in last night's dream" – but the show itself opened with a "Tweetwall" displaying a message far less subtle than any wink-wink nudge-nudge from the 1950s:

A visit to the exhibition made it perfectly clear that there is much more to the history of this original Canadian vessel than First Nations transportation, European discovery or the fur trade. No doubt the famed coureurs de bois spread more than their tobacco ash across the country. But the canoe as a recreational vehicle and as a mode of courtship was born, in a happy coincidence, during the Victorian era.

It was a time of strict morals and behaviour, yet also a time when the concepts of romance and marriage were going through a dramatic shift. Marriage ceased to be about necessity, convenience or arrangement, and instead became – in part because of idle time, urbanization, literacy and the rise of popular romantic novels – more about two people finding each other and, over time, falling in love.

Courtship became an accepted prelude to marriage, although the Victorians tended to treat it as a potentially wild animal to be caged, or else. Young couples could meet in the parlour under family, usual parental, supervision. They could sit on the front porch so long as a chaperone, often an elderly aunt, was included. At later stages, they might even go for a walk in the park – so long as they were accompanied by a guardian. Privacy was something reserved for marriage.

However, the human condition is such that ways around this restriction were eagerly sought. As the slim guide to the exhibition, written by its curator, John Summers, suggests, the bicycle and canoe played significant roles in the shifting concept of courtship. The bicycle became popular, surely in no small part because older chaperones either could not ride or could not keep up. The canoe was an even better option, with no room for a chaperone, and carrying, for older people, a built-in fear factor: of tipping.

A bicycle might take a courting couple into a park, but a canoe could provide even more seclusion, allowing them to slip into a hidden cove or behind the curtain of a low-hanging willow. That image was poetically captured in 1878, the peak of Victorian times, by Treasure Island author Robert Louis Stevenson, who had embraced the new fad of recreational canoeing and paddled himself through France and Belgium. In The Canoe Speaks, he writes:

The berry in the bramble-brakes;

Still forth on my green way I wend

And by the nested angler fare,

And take the lovers unaware."

As the tweet at the entrance to the canoe museum suggested, there are certain words and images that easily suggest a no-known-source word like "canoodle." Add a frisson of danger, and you end up with Katharine Hepburn and Humphrey Bogart talking about "whitewater" as if they needed a smoke after doing it. "I never dreamed any mere physical experience could be so stimulating," Hepburn breathlessly suggested in The African Queen.

A paddlewheeler is no canoe, but go back to pre-Confederation Canada and you'll find Anna Brownell Jameson, wife of the attorney-general of Upper Canada, claiming that a canoe run down the St. Marys River rapids at Sault Ste. Marie left her "giddy" and "breathless" – "Two glasses of champagne could not have made me more tipsy and self-complacent."

Toward the end of the Victorian era and on into the early 20th century, canoe clubs created perfectly acceptable social settings for young men and women to meet and spend time together in canoes. Changes in women's fashions gave far more freedom of movement. They were no longer forced to sit side saddle on horses and could now pedal a bicycle or step easily into a canoe.

There was also the unspoken theory – quickly disproven by Canadians, it is believed – that a young man and young woman could hardly get into compromising positions in something so tippy and awkward as a canoe. So canoe courtship came with convenient, if somewhat naive, approval.

Canoe manufacturers were quick to move on the possibility that their product might be useful for more than hunting, fishing and racing in regattas. Sleek vehicles known as "courting canoes" became quite fashionable.

They were the Victorian ancestors of the 1960s "shag wagon" (no records exist of their relative success rates). The man could paddle while the object of his desires could lounge and relax, taking in the scenery and, of course, avoiding the sun. Some canoes had fixtures in which she could stand her parasol. Others, somewhat later, came with fold-up gramophones capable of playing the popular 78 rpm vinyl records of the day. The exhibition in Peterborough featured several courting models from the collection of Ken Kelly of the Wooden Canoe Heritage Association.

Romance in the cards

But perhaps the show's most interesting aspect was to be found in the collection of illustrations and postcards tied to the phenomenon of canoe romancing.

There is a risqué-ness that increases over the years. While the subtext of a postcard of a young man helping the dainty young woman aboard with the line, "You'll be perfectly safe in my canoe," is perhaps a tad suggestive, the intent of another, which portrays a young couple and reads, "I'd like to paddle your canoe," is, well, unmistakable.

The decade following the Great War, writes Mr. Summers (former general manager of the museum), was also a time of the "New Woman." One popular theme in postcards was to show a woman alone and insisting: "I can paddle my own canoe." That said, the current obviously flows in the other direction in most cards from the era. One shows a sad-looking young woman contemplating nature and saying: "I can paddle my own canoe, but it's awful lonesome."

Hollywood often made the connection, although for reasons unknown it rarely occurred to movie directors to hire someone who knew what to do. The museum had clips showing that Nelson Eddy was a pitiful paddler as the Mountie who saves damsel in distress Jeanette MacDonald in 1936's Rose-Marie (as well as the famous 1953 shots of Marilyn Monroe in a canoe and with a uniformed Mountie when she was filming River of No Return in Banff).

And, of course, there were the songs, the canoe once as familiar in popular music as hurtin' is in country and western:

In my canoe we'll hide among the willows close by the shore where no one can see. I'll cuddle you and snuggle you if you'll cuddle me … In My Canoe (1913)

All that, obviously, is not only corny but tame. The standard for songs appears to have been different – safe and innocent where the postcards were suggestive. One cartoon even showed a man and a very buxom woman hanging desperately to an overturned canoe, with the caption: "We learned one thing – it can't be done in a canoe!"

'Spoon you from behind'

But, of course, it can. Canadians don't need Pierre Berton or Phil Chester to tell them that not only is it possible (who knows how many of us were "launched" in a Chestnut or Peterborough or Old Town?), but is considered a rite of passage among those who know that "length" and "girth" are also measured in cedar – not to mention aluminum, fibreglass, ABS, Kevlar …

As for that curious word "canoodling," it has been part of the Canadian vocabulary for so long, it is little wonder that its origins are "unknown." Still, it wasn't until 2013 that Cosmopolitan, the New York-based magazine noted for its sexual advice, addressed the subject.

Complete with illustration, Cosmo got immediately to the point:

"Why you'll love it: This relaxing pose is perfect for slow, sensuous lovemaking. Because of the close confines, your bodies will be melded from head to toe, and the rocking motion of the boat will intensify each of his internal strokes.

"Cosmo hint: Take it nice and easy or your boat could tip over. To play it supersafe, make sure you only go out on a calm lake where you can swim to shore."

Sadly, "canoodling" is given only three out of Cosmo's five possible hot flames for "carnal challenge."

Perhaps it has to be done in whitewater to earn the full five. Elizabeth Hay: ‘I never managed to convince my children that Canada was an exciting place to live your life’
August 28, 2015 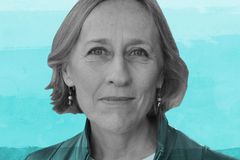 Tinder gluttony has stoked apathy and callousness in dating
August 20, 2015