A Montreal landlady who says she was assaulted by a self-proclaimed sovereign citizen now at the centre of a rental dispute in Alberta is warning that the man should not be taken lightly and needs to be behind bars.

Jocelyne Malouf told The Canadian Press on Wednesday that she made a mistake when she allowed Mario Antonacci to move into a Montreal apartment in 2007 and housesit for five months.

But she said he and a young woman he was with told her they had nowhere to go, so she took pity on him.

"Finally I gave him the apartment and when the disaster started, it was not long," she said.

Ms. Malouf said Mr. Antonacci declared the place an "embassy," paid no rent and when it was time to leave, things went badly.

"He was trying to keep the apartment for him without paying," she said. "That is exactly his style because he said to me, `you can't put me out of here now.' At that moment I said, `you better stop playing games because I'm going to tell the police and I can't stand it anymore.'"

She alleged that's when he threw her down a flight of stairs, breaking her pelvis, arm, wrist and ankle.

"I went to hospital for two months," she said. "I can tell you one thing – that man is a very dangerous person."

Alberta senior Rebekah Caverhill tells a similar story about a rental property she has that she says was also claimed as an embassy. She knows the man in the dispute as Andreas Pirelli, 48, who sources have confirmed is Mr. Antonacci.

Ms. Caverhill has been locked in a two-year battle with Mr. Pirelli, who she said identified himself as a follower of the Freemen-on-the-Land movement, changed the locks on her Calgary rental house, refused to leave and declared it his "embassy."

Ms. Caverhill said she has been billed for renovations the man did inside the home and that he had a lien placed on the property.

The courts in Quebec never got a chance to rule on Ms. Malouf's allegations.

Mr. Antonacci, who had pleaded not guilty, stopped showing up during his 2010 trial and a warrant was issued for his arrest.

Lawyer Guillaume Langlois, a Montreal defence attorney, confirmed he's still the lawyer in a pending file involving Mr. Antonacci, but he said he hasn't spoken to his client since he stopped going to court.

"I'm still in the file, but he's under a warrant, I think," Mr. Langlois said Wednesday. "It's been a long time since I've spoken to him."

The warrant should be enough to order Mr. Antonacci back to Montreal.

The Criminal Code says a warrant issued for someone who does not appear at trial "may be executed anywhere in Canada."

The Quebec prosecutor on the file was unavailable on Wednesday. Montreal police weren't immediately able to say whether they'd been contacted by their counterparts in Calgary.

Calgary police have said they are working with the Crown to determine if any charges can be laid against Mr. Pirelli. They have declined to comment on the Quebec warrant.

Mr. Pirelli did not respond to an email request from The Canadian Press for comment on the Quebec situation. When The Canadian Press asked him about Ms. Caverhill's initial allegations, he responded with a warning that he has trademark claims on the name "Andreas Pirelli" and "The First Nations Sovran Embassy of Earth."

Earlier this week, The Canadian Press was faxed a fee schedule alleging the unauthorized use of copyrighted names, including Andreas Pirelli and Mario Antonacci. The fax says the fee is $1-million for each use of each name.

The Law Society of British Columbia and B.C. Notaries have both issued warnings about Freemen. In a bulletin last year, the society said the group may number as many as 30,000 in Canada.

RCMP and the Canadian Association of Chiefs of Police are developing awareness materials for frontline officers and the movement is the subject of upcoming policing seminars in Vancouver and Toronto.

The FBI considers the movement a domestic terror threat in the U.S. but a Freemen-on-the-Land spokesman told The Canadian Press earlier this month that violence is not advocated and has no place in the movement.

Ms. Malouf said she was angry when Mr. Antonacci left in the middle of his trial and was not surprised about the Calgary situation.

"There's nothing that is going to stop that man from making people suffer and to be dangerous. He's a crazy person," she said.

"They have to do something with that man and put him in prison."

‘Sovereign citizen’ at centre of rental controversy was wanted in Quebec
September 25, 2013 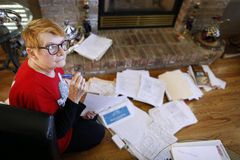