A firestorm of virulent reaction has engulfed the Roman Catholic Primate of Canada, who is being pilloried for describing abortion as a moral crime even when it's performed on rape victims.

His remark was condemned by the Harper government, provincial politicians in Quebec and feminist groups. One newspaper columnist even expressed his wish that the religious leader would suffer a slow, painful death.

But a spokesman for the Archdiocese of Quebec City, where Cardinal Marc Ouellet is based, said the cardinal was simply stating church doctrine when a reporter asked him about rape and abortion.

Once touted as a possible candidate to become pope, Cardinal Ouellet apparently had no intention of wading into a public policy debate.

"There is a spin, saying the cardinal would like to re-criminalize [abortion] and this is not what he said," said Jasmin Lemieux-Lefebvre. "He's not calling for re-criminalization. He was talking [about]a moral thing, this is a moral issue. He was not bringing this to the judicial level."

He said Cardinal Ouellet wasn't condemning women and believes they need better care before and after abortions. He also said that when Cardinal Ouellet discusses abortion as a political issue, he merely calls on Canada to offer some form of protection for the unborn.

"Canada is the only country in the world to have a complete legal vacuum on this issue," Mr. Lemieux-Lefebvre added in a statement. "[Cardinal Ouellet] leaves it to the politicians to explore a balanced solution from among the basket of options that exist elsewhere."

Canada's abortion law was struck down by the Supreme Court in 1988. The comments from Cardinal Ouellet come as the abortion issue, dormant in national politics for so long, is suddenly heating up again.

Over the weekend, Cardinal Ouellet, speaking to an audience of about 200 people, applauded the Harper government for its stance against funding abortions in the developing world. He added, with respect to rape: "Why should we push a woman who has been the victim of a crime to commit one of her own?"

In an exchange with reporters later, he said: "I understand very well that a woman who's been raped is dealing with trauma and that she needs to be helped. But she needs to do so with respect for the being that is in her womb. It is not responsible for what happened. It's the rapist who is responsible. But there's already a victim. Do we need to have another one?" He said taking a human life "is always a moral crime" and, he added, a fetus is a human life.

But the Harper government distanced itself from the remarks.

"The government did not put forward the agenda for maternal and child health [at the G8]to go get congratulations from the cardinal," Intergovernmental Affairs Minister Josée Verner said in an interview. "I don't want to be disrespectful towards him, but this wasn't our objective."

Ms. Verner described herself as pro-choice, and she offered a very curt assessment of Cardinal Ouellet's weekend remarks: "It's unacceptable."

Quebec's airwaves and cyberspace were aflame with far more extensive commentary Monday. The Ouellet remarks quickly became one of the country's top trending topics on the social networking site, Twitter.

"We're all going to die," Mr. Lagace wrote. "Cardinal Ouellet will die someday. I hope he dies from a long and painful illness. . . Yes, the paragraph I've just written is vicious. But Marc Ouellet is an extremist. And in the debate against religious extremists, every shot is fair game."

The archdiocese said Cardinal Ouellet had touched on abortion in his speech on the weekend, but it was not a key part of his message. Mr. Lemieux-Lefebvre said Mr. Ouellet was calling attention to a "vacuum on the rights of the unborn in Canada. He's saying we should question this. He understands the limit between state and church.

"When asked for a pastoral perspective, if he thinks that abortion is okay in the case of rape, he's saying it's not a circumstantial thing because we believe that you are fully a human person from the time of conception. If you would be the fruit of a terrible rape, would you be less a dignified person because of this?"

The National Catholic Reporter cited Cardinal Ouellet, in 2005, on a list of about 20 candidates considered possible replacements for the late John Paul II.

Ignatieff accuses Tories of dividing Canadians with hot-button politics
May 17, 2010 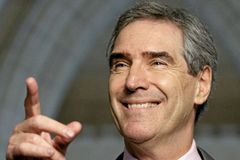 Majority oppose Harper's exclusion of abortion funding: poll
May 17, 2010
Follow us on Twitter @globeandmail Opens in a new window
Report an error
Due to technical reasons, we have temporarily removed commenting from our articles. We hope to have this fixed soon. Thank you for your patience. If you are looking to give feedback on our new site, please send it along to feedback@globeandmail.com. If you want to write a letter to the editor, please forward to letters@globeandmail.com.
Comments