A teen who willingly gave a DNA sample to police investigating the death of a girl in a remote Manitoba First Nation community has admitted he killed her while sexually assaulting her.

The boy, who is now 17, pleaded guilty to first-degree murder in Court of Queen's Bench on Thursday. He cannot be identified under Canada's youth justice laws.

Teresa Robinson was 11 when she disappeared after leaving a birthday party in Garden Hill on the night of May 5, 2015. She wasn't reported missing to RCMP until six days later.

That same day, searchers found her lower torso in a wooded area and her skull about nine metres away, according to a brief statement of facts presented in court by Crown attorney Chris Vanderhooft.

It was initially believed she had been killed by a bear.

Injuries uncovered during an autopsy, however, led police to collect a DNA sample.

That set off what Vanderhooft described as a "lengthy and protracted" homicide investigation in the community of about 2,500 people, about 500 kilometres northeast of Winnipeg.

"It was in the course of that sweep that (they) took a consent sample from the accused," said Vanderhooft.

The sample matched the DNA taken from the girl's body and led to the teen's arrest in March 2016. Another DNA sample was taken by police and also matched, Justice Chris Martin was told.

Crown and defence lawyers said they will recommend the teen be sentenced as a youth when court reconvenes Feb. 5. They will also recommend the maximum youth sentence of 10 years – six years in custody followed by four under conditional supervision in the community.

They want the teen to get two years of credit for time served in remand.

The full facts of the investigation and information about the teen's background are to be presented at the February hearing.

Outside court, Teresa's mother said the boy's guilty plea would bring her some closure.

"All he kept saying was that he didn't .... do that, he wouldn't do that," Sandra Robinson said.

She said she hasn't yet turned her mind to what she wants to tell her daughter's killer when given a chance.

"I haven't even thought about that," she said.

Teresa was very well-liked in her community, Robinson said.

"She used to make people laugh She was outgoing, fun to be around. Everybody liked her. Everybody loved her.

"She was a little girl. She was my baby." 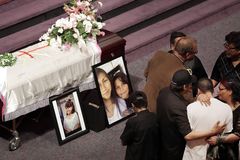