This is the final instalment of Six Degrees: Experiments in Pluralism, an essay series devoted to exploring Canada's emerging identity as an experimental society. The inaugural Six Degrees "citizen space," presented by the Institute for Canadian Citizenship, will take place in Toronto from Sept. 19 to 21. 6degreescanada.com

This past Canada Day I sat at a table with people from Albania, Palestine and Afghanistan. They were candidates for citizenship, and I was moderating a conversation at a ceremony being co-hosted by Parks Canada and the Institute for Canadian Citizenship (ICC). Two hundred of us had gathered in a tent next to where the Rideau Canal meets the Ottawa River. It was a beautiful morning in the capital.

As so often during these roundtables, the conversation kept casting ahead to the future. Everyone had plans, both for themselves and their loved ones: better jobs, more education, kids who would most certainly grow up to be engineers and doctors.

The table was dominated by three sisters, a mother, one husband, and two small children – all of them from an extended Afghan family. Only a single sister was becoming a citizen that day – her older sibling already had citizenship; her younger was in the process of getting one – but family members were happy to talk. The women in particular wanted to share their astonishment at the difference Canada was already making to their lives.

Foremost was the miracle of gender equality. To find themselves in a society where women could be educated and employed, protected by law – and independent of lifestyle – was astonishing.

A congruent miracle was the blossoming of their waking dreams. Put simply, these Afghan women now felt they could dream aloud about what they and their children, daughters and sons alike, could expect from life, and might well achieve.

I asked why they couldn't grow such dreams back home. After a pause, the young woman about to swear her oath explained that, in effect, instability, social custom and endemic violence had made difficult – or just too painful – even the private nurturing of hopes.

"In Afghanistan," she told the table, "I would get up in the morning, make tea, and then just think about how to survive the day. Nothing more." The Palestinian man nodded in agreement and the Albanian, an older woman, recalled with dismay her early adulthood under the dictator Enver Hoxha, who ruled her country for four decades until 1985.

The conversation has stayed with me. I am pleased that newcomers to Canada feel they can dream the same things many of us take as our birthright. I am also sorry that in other countries – and yes, for certain marginalized groups right here – such reveries remain fraught. Aren't the majority of us lucky to be living in a place of healthy dreaming?

All nations should keep talking to themselves about their collective societal project. (Only countries that respect freedom of expression get to do so, but that is a different, if not unrelated, subject.) For an immigrant nation such as Canada, these exchanges are essential.

They allow for assertions and reassertions of core principles and benchmarks. They also constitute necessary gut checks about gaps between rhetoric and reality, and challenge the too complacent stories we sometimes tell concerning how well we are doing.

But the accelerated evolution of Canada into one of the most diverse countries on the planet, its prosperity fuelled not so much by the constant inflow of newcomers as by their decisions to become citizens in large numbers, isn't the primary reason to keep talking.

Instead, it is the newness of this distinctly 21st-century nation, this "first postnational state" referenced by Prime Minister Trudeau earlier this year, that obliges ongoing conversations about our unfolding experiment in pluralism.

Experiments start from doubt and work toward discovery. For sure, we could use more doubt about how we have framed our history to date, most emphatically with regard to Indigenous peoples. We also may want to doubt our inherited notions of official languages and examine more closely the true engines of our economy, in particular the ways that diversity fuels prosperity.

At the other end could lie the discovery of the actual "space" we occupy together. That space is obviously geographic. But it is equally social, historical, linguistic and cultural. This Canada isn't what most of us imagine it to be – if it ever really was.

Identifying our emerging nation isn't wishful thinking. Not in 2016. In the year of Donald Trump and European nativism, of what Globe and Mail columnist Doug Saunders calls the global "reflex appeal to fear," such a project is a show of confidence in our experiment, and in our better natures.

This past week 67 per cent of polled Canadians apparently supported the proposition that immigrants should be screened for "anti-Canadian values." Is that worrisome? A little bit. But the poll itself, triggered by the crass calculations of a candidate for her party's leadership, may have served as an inadvertent reflex appeal to fear. Ask a simplistic question, get a simplistic answer. As always, it isn't hard to find the right group of respondents to go down a dark road of negativity.

To paraphrase the author Pico Iyer, alienness as an expressed "fear" is rarely about other actual people or places. It is most often an echo sounding from the pebble dropped into the deep well of our unexamined prejudices and unworthy thoughts.

The notion of immigrants suddenly arriving with the virus of "anti-Canadian values" – whatever those might be – isn't only ahistorical nonsense. How, for instance, would we have fared over the last century if we'd measured, by this arbitrary yardstick of acceptability, immigrants from early-20th-century Ukraine or post-Second World War Italy and Greece, 1980s Vietnam or dawn-of-the-millennium China and Korea. The exercise feels like not-so-thinly-veiled Islamophobia.

Such a response isn't just ugly; it is a collateral rejection of the wakeful dreams of those women and men at the citizenship ceremony in Ottawa. Are their hopes and yearnings not identical to our own? They sure sound the same. Likewise their unexamined prejudices and unworthy thoughts. Everyone has them, too.

It is important to speak frankly here. All of us are accidents of time and place. None of us did anything to deserve easier access to everyday dreams, and none of us can claim a superior genetic composition or a bigger, shinier heart. Maybe this truth is too obvious for most people to remark upon. Or is it too troubling in its denial of a sense of superiority based on nothing more than happenstance?

Try finding six degrees of separation between any two human beings in 2016. In Canada, in Toronto, you're lucky to get to three or four.

We're all that connected, at least by association, and we are all that interdependent, at least by being human. The rest, in a sense, is what we choose to make of our proximity.

Think of the planet as a circle. That shouldn't be so hard. No one really lives outside this circle – how could they? Our challenge is one of empathy. Are we capable of it? Can we imagine the other? Respect the other? Live with the other?

We do have the small mercy of mutual dependency and the sweet expectation of becoming part of something larger and more expansive. And the circle promises this: You are right here with us and we are right here with you. Watch what we can do together. 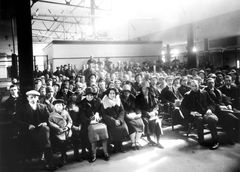 Canada’s identity is an experiment in the process of being realized
May 16, 2018 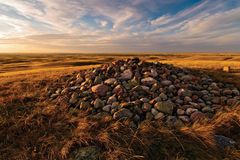